Here are the top 100 retail financial institutions on Facebook ranked by their total number of ‘Likes’ for the second quarter of 2013. If you think your bank or credit union should be listed and it isn’t, click here. 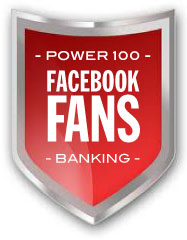 Facebook has attracted much attention from retail banks and credit unions in the last few years. The Financial Brand estimates that roughly three out of every five financial institutions on earth have a Facebook page.

The Financial Brand partnered with Social Media Explorer to see who’s generating the biggest Facebook communities in the banking industry. What we found is that big banks — even big credit unions — don’t have any problems attracting large Facebook fan bases.

Chase tops the list with 3.8 million fans, thanks to its Facebook-driven charity work where the bank gives millions away every year.

Only seven financial institutions have more than 1 million ‘Likes.’ If you added up all the ‘Likes’ for the top 100 banks and credit unions, it would work out to 2.13% of Facebook’s user base.

Nine financial institutions on the “Power 100 Facebook Likes” list actually saw the net number of their ‘Likes’ decrease in the last 90 days. Both Chase and Capital One shed tens of thousands of ‘Likes,’ but that only equates to around 1.3% of their respective fan bases. Credit Union Australia suffered the biggest loss, dropping 3.17% of its ‘Likes’ in the last three months.

Note: All data covers Facebook activity through April, May and June 2013.