Subscribe Now Get The Financial Brand's FREE Email Newsletter
Branch networks are shrinking, and banks need to get better at handling this disruptive process with empathy. One study shows that 31% of customers who switched banks did so when a branch closed. Can customer attrition be minimized with a better strategy?

Many financial institutions have simultaneously set goals of becoming “mobile-first” and reducing costs by trimming their branch systems. But there are downsides to such thinking that may not be adequately accounted for in their strategy.

They could not only be losing opportunities to broaden customer relationships, but also be making it easier for both traditional and fintech competitors to pick off consumers whose only connection to their primary financial institution is a smartphone.

“Banks need to realize that if they are going to go to a mobile-only strategy, and think they’re solving the problem of reducing costs, they’re really opening a Pandora’s box,” says Jean-Pierre Lacroix, president of Shikatani Lacroix, a strategic design firm whose specialties include banking offices. “They’re actually training their customers to leave them. They need to understand that the branch remains a pivotal element of sustaining and retaining their customers.”

Lacroix doesn’t dispute that digital banking is increasingly doing the heavy lifting of handling everyday banking transactions. But his point is that that’s not the whole game. He makes a case for rethinking how branches are used instead and, in cases when branches are closed, handling the disruptive process with more empathy for both employees and customers than is typical.

“Indeed, there are too many branches, and many of them are in the wrong locations,” says Lacroix. “But banks must understand that when they close those branches or relocate them, they become vulnerable to losing customers. Moving to a mobile-first approach is only a temporary solution.”

The firm’s report states that branches are an under-leveraged opportunity for long-term growth for traditional financial institutions.

“Banks need to rethink the role of the branch in their ecosystem and about how they can drive more relevant engagement in the branches with advisors,” Lacroix says. One suggestion from Lacroix is preparing the branch staff to engage in financial coaching type of conversations with customers by providing better training and tools.

The long-term solution is what Lacroix has dubbed “seamless banking,” which we’ll address further on.

He adds that his firm’s study about the future function of branches, conducted among U.S. and Canadian consumers, found that even among supposedly mobile-only customers 60% of them visit a branch, 18% at least once a week. And 39% said they would visit branches more often if banking hours were extended.

Solutions to the cost issue should tackle that challenge without causing customer attrition, he explains. 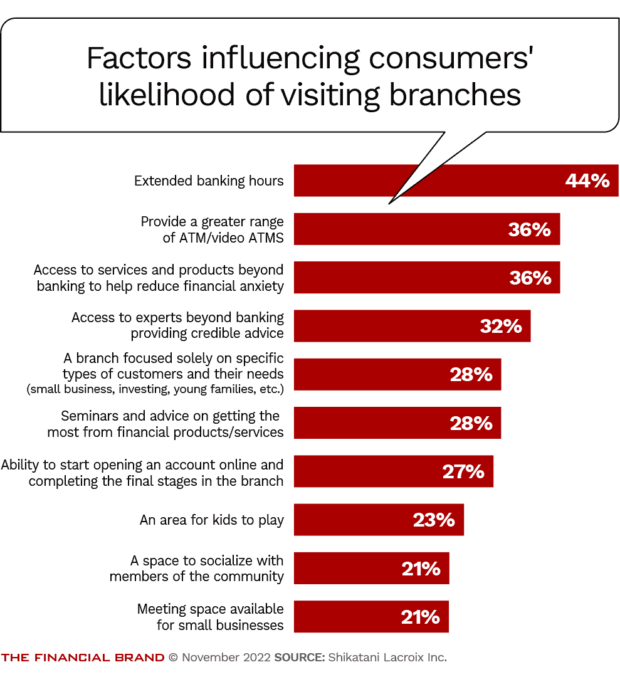 Banks Must Recalibrate the CX of Branch Closing

Lacroix believes many banks handle branch closures very badly, flunking at what he calls the “choreography of branch closures.” Given that shrinking branch networks is certain, he says they have to get better at this.

31% of customers who switched banks did so when a branch closed. Among affluent customers, this hit 35%.

With most institutions, a branch closure plays out very negatively. Often a letter from bank headquarters informs them that their branch is closing and their account moving to another. Not much else is said. A poster may appear at the branch slated to close. Inside the branch, employees who are likely going to be let go are hardly goodwill ambassadors that can hold onto customers’ business.

Lacroix says that these customers should be hearing from the managers of their new branch. Managers should be welcoming them aboard, telling them that the institution values their business.

“This shows empathy for the disruption that the bank is causing for these customers,” says Lacroix.

That’s critical, because what many customers — even those who are “mobile-first” — want is empathy from the bank’s people.

Everybody loves the idea of the many apps they carry around in their pockets. Yet when you look at the comments posted on the App Store or Google Play, consumers’ beefs often arise from the inability to reach a person to resolve a problem with the app or at a more basic level.

For many consumers, personal assistance is critical. This includes the ability to obtain assistance from human chat or an assisted channel, from a call center to the ability to have a digital face to face with a banker who can solve a problem.

“If it’s a big issue, I’m not doing that over the phone. I’m going to the branch and having a meeting with the branch manager or the front-line staff.”

“Our research clearly shows that irrespective of the main channel the customer uses, they want access to real people, not technology,” says Lacroix.

Some institutions prefer to push consumers into assisted digital channels because it saves on branch staffing costs. Lacroix thinks this is very short-sighted. This approach solves the immediate problem, but it goes no further.

In a branch, by contrast, “odds are it will be the same person helping, so there is a sense of belonging.”

Too often, when banks see the value of branches for human contact, they do so through the filter of improved sales results, according to Lacroix. Often, that means that they are going to try to sell something the bank provides to meet the person’s problem.

“Bankers force-fit their products to the problem, versus finding a solution to the customer’s problem that may not be one of their products,” Lacroix says.

The consultant thinks institutions have to improve the training and tools of the people working in the branches.

“A branch staffer needs to be something of a financial psychiatric expert.”

He says branch staff need to be able to sort out the underlying factors that are causing financial anxiety. In addition, they have to be able to speak in plain language about the problems and about the potential solutions.

Lacroix says that some progress has been made. In 2017 a study by the firm found that bankers were near the bottom of a list of sources of advice that consumers would tap for financial consultation. In 2022, they have risen to second place, behind friends and family. (Note, though, that the youngest consumers tend towards online sources.)

Rationalizing branch networks to maximize the potential of branches while controlling costs hinges on making all channels work together better.

“Omnichannel” thinking has been around for more than a decade, but often systems still don’t talk to each other, according to Lacroix.

“If you get a problem solved, typically it gets solved when they tell you that you have got to go to a branch to get the final solution,” Lacroix. By that point the customers has had to endure a frustrating gauntlet of call center and digital channel aid, and had to explain their problem all over again at every step of the way.

To Lacroix, the solution is “seamless banking,” which is what omnichannel was supposed to provide for banking, but writ larger.

He believes that the best approach would not only ensure that consumers need only explain a problem once with their primary financial institution, but with any associated provider. In a sense, this entails enabling all players a consumer works with to communicate, and for branch staff to be on the same page as the consumer the moment they walk in. In fact, humans on any channel would be so informed.

“Open banking will allow that to happen,” says Lacroix. Down the road, other tools, such as digital ledgers, will expand the capability to apply seamlessness.

“Banks are not there yet,” says Lacroix. But they need to get there soon.