Subscribe Now Get The Financial Brand's FREE Email Newsletter
Retail banking leaders wrestling with branch strategy and cost shouldn't forget branches remain the dominant sales channel. The truth is, digital sales teams would benefit by learning from their branch counterparts. For their part, branches must become more digital as their role continues to change.

The long-running debate over whether branches are dead, dying or just a costly albatross misses the key point: No business — banking included — succeeds or fails because of delivery channel efficiency. It lives on sales.

And right now, the much-maligned branch networks are still the champs of retail banking sales — “new to bank” or new-account sales in particular — and are expected to remain so for at least the near term. 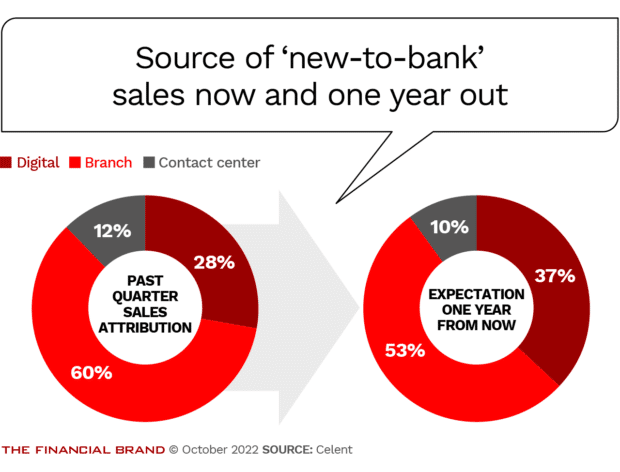 Data from Celent’s ongoing Branch Transformation Research panel — a static group of 80 financial institutions that the research firm regularly polls — shows that branches accounted for 60% of new-to-bank sales attribution as of June 2022, about the same as it was a year earlier. Change is predicted, however. By mid 2023, the panel predicts branch sales will drop to 53% and digital sales will rise proportionately.

Digital sales almost certainly will overtake branch sales at some point, although the one-year predicted change may or may not continue at the same pace. Banking executives should consider the example of the retail industry, observes Celent Senior Banking Analyst Bob Meara.

How Banking Shapes Up in Ecommerce

Even after two decades of development — including the pandemic spike — ecommerce still represents only about 15% of total retail sales overall, Meara states. The percentage varies widely depending on product category — petroleum is basically zero and fresh produce is quite low, for obvious reasons, says Meara, but consumer electronics is about 70%.

The analyst puts banking products in the roughly the same category as electronics in terms of ecommerce potential, meaning it still has a long way to go.

For digital banking sales to overtake branch-based sales, Meara tells The Financial Brand, banks and credit unions must fully deploy digital capability across all products and lines of business. Very few have done that, he maintains. And the pace is too slow. He cites one bank where deployment of digital consumer loan origination didn’t occur until three years after a digital account opening solution — from the same vendor — was launched.

“Banks wisely understand that increased branch density is not the only way to grow, but the industry has a long way to go to be better at ecommerce.”

Understanding the different approaches to sales used in physical and digital banking channels is key to improving digital sales performance.

Why Branches Still Dominate in Sales

Celent had an opportunity to “look under the hood” at the digital sales capabilities of a small group of bank members of its digital banking research panel.

The analyst pegged this dismal result to several factors. One is simply that many institutions rushed to set up a digital solution. Covid was the impetus, and to be fair, they had little choice.

Banks and credit unions approached digital sales much like a branch, with a marketing budget and a set of metrics to be tracked. They typically didn’t have a rigorous process to follow up on abandoned applications, says Meara, nor did they have a strong onboarding program to add products to the basic checking account.

What Digital Can Learn from Branch Bankers

Digital bankers, as a general rule, create workflow that’s as fast and as low-friction as possible, Meara observes. “They put a customer journey-usability lens on it. The last thing they want to do is cross-sell and upsell during the original application because it increases abandonment rates.” That’s not a wrong approach per se, he adds, “but in many cases you’re left with a very good digital workflow designed to get an account opened, but nothing else.”

It’s not an effective way to grow a long-term relationship. “Branch bankers do things very differently,” says Meara, “they’re very relationship focused. They want the customer to sit around a few more minutes and have a conversation.”

Digital bankers want to avoid doing anything to increase abandonment rates, but miss key sales opportunities in the process.

Depending on what the initial product sold was, branch bankers will inquire about whether the person has a checking account or a debit card, and whether the debit card appears to be top-of-wallet — or is in their mobile wallet, and so forth. All these are things that a banker would (or should) do instinctively in a branch, according to Meara, but which, are not done digitally, based on Celent’s research and his client work.

The analyst acknowledges digital bankers may not want to risk higher abandonment rates by incorporating too many questions into the online/mobile account opening process. However, he suggests they can proactively follow-up using the many digital marketing tools at their disposal.

Branches aren’t perfect by any means. Branch-based sales to a large degree are still about having convenient locations and hours. “We’re here for you, just drop by.” In other words it’s very reactive.

The Takeaway: Meara believes banks and credit unions must get “more digital in their branches” (the branch workflow needs to be much more monitored and digital), and they must get “more branch in their digital” (teach digital players how to build relationships and how to follow up).

Tough Case for Investing in Branches

Where does that leave branch investment going forward? “Significantly challenged” is the answer. Celent research found an array of challenges to investing in branch transformation. 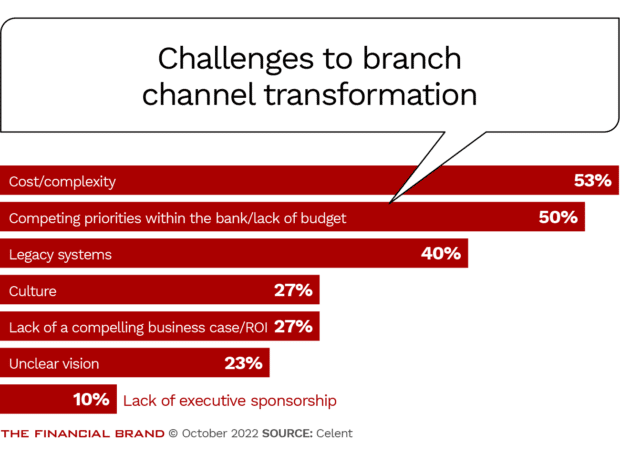 Cost is at the top and without a doubt, branch networks have a big target on their backs. The urgent need to improve performance of digital banking with finite resources is a big reason for that. A recession will add to the pressure for short-term expense reduction.

“No doubt some senior leaders will think you’ve got four eyes in your head if you’re suggesting something as stupid as investing capital in the branch network,” Meara acknowledges.

Another reason for that reaction is how difficult, expensive and time consuming it is to make changes to branches. As the Celent analyst observes a bank can spin up a new mobile banking app fairly quickly. With a branch just building out a proof of concept can take months and the entire project can go on for years. That invites paralysis by analysis, says Meara.

He is quick to point out that investing capital in a branch network deserves extra scrutiny. “The long-term trend line is obvious and digital-first ought to be every banker’s mantra,” says Meara. “But that doesn’t mean banks shouldn’t invest in branches at all.”

Some bankers agree with that view. Among a segment of Celent’s Branch Transformation Panel, a little more than half said in mid 2022 they were looking to increase the number of branches over the next two years, the highest percentage in more than four years.

New branches will, and should, be very different. Meara holds up Bank of America’s high-tech plus high-touch strategy as a good — albeit expensive — example.

Most banks and credit unions are not thinking about agility when they design and implement branch changes. BofA’s new branch designs, however, tend to be modular so they can change them more easily over time without lots of architects and builders.

BofA’s strategy is not about high-density, Meara points out. It’s all about strategic investments in key markets. Meara believes this approach is “an obvious, proper endgame [for branches] given the transaction trends.”

He likens bank branches to shoe stores. “Most people don’t shop for shoes very often, so they would easily tolerate a little bit of a longer drive.” Likewise most customers now don’t go to the branch every week.

“The perceived convenience of a nearby branch can translate into fewer and fewer branches and lower branch densities without negatively impacting the user experience.”