Subscribe Now Get The Financial Brand's FREE Email Newsletter
The pace of branch transformation has quickened. Banks and credit unions are not only altering branch design and layout, they’re also upgrading the role of branch staff. For an increasing number of institutions, the teller position no longer exists and the focus of branch employees has become advice, sales and customer engagement.

The strategic role of branches is becoming much clearer. Banks and credit unions increasingly are adopting radically redesigned facilities, with smaller footprints, advanced technology that enables not only self-service, but a personalized experience, and much more highly trained staffs filing very different roles.

The soaring trajectory of digital banking has sharply reduced foot traffic in branches — as much as 35% to 50% at most institutions over the past five years, according to bank research and consulting firm Bancography. More than just a volume drop, the nature of customer interactions has also changed. As a result, a greater portion of customers visiting branches are now coming to open accounts, seek financial advice, or complete a complex transaction.

To the extent that the offloaded transactions are routine, and those that remain are more likely to generate revenue, the industry’s branch transformation may be a net positive, observes Steven Reider, president of Bancography. Others agree with that view.

“The branch remains a critical customer touchpoint,” Andrew Beatty, Head of Global Next Generation Banking at FIS, wrote in Finextra. “It is a physical manifestation of the bank’s brand and all that it stands for. The branch helps to build customer trust, especially for those banks which often play a major role at the heart of the community.”

Since digital technology has taken over many basic transactions, the traditional branch and teller model of waiting in line, getting cash or depositing a check has become far less typical.

Even with more complex transactions, such as a loan application, many consumers now begin them on digital channels then visit the branch as a final destination, making it a critical link between the digital and physical worlds, Gina Bleedorn, Chief Experience Officer at Adrenaline, tells The Financial Brand.

“While transactions may not be as important, banks and credit unions could be losing an opportunity for human connection,” says Bleedorn. “For many community financial institutions that can’t compete with big banks on mobile capabilities, the branch is a point of differentiation.”

Yet as the role of branches changes, so too has the role of tellers and other branch staff, observes Beatty. One long-running trend that has picked up new momentum is the creation of “universal bankers” — a hybrid role that mixes the capabilities of a personal banker and a traditional teller.

These staffers must be well-versed in all aspects of branch banking and be able to give guidance, and offer a range of products, often based on a personalized picture of a customers’ financial circumstances. “From a bank perspective this elevates the branch banker’s role to trusted advisor and builds customer commitment and loyalty,” Beatty states.

Automating Transactions to Focus on Advice

Branch redesigns are hardly new in banking. More than 20 ago, the now-defunct WaMu pioneered radical branch design with its Occasio concept that replaced teller windows with freestanding teller pods.

But it’s taken the surge in consumer use of digital amplified by the pandemic to get more institutions to move away from the traditional. The trend is gaining speed. Regions Bank is transforming many of its 1,300 branch locations to focus more on service than basic transactions.

“We got rid of the traditional dichotomy of the teller and the banker. If you walk into any new branch, you’ll see no teller line.”

Regions created a technology tool called Greenprint that allows bankers to have a better conversation with small business customers to map out plans and the next step they should be taking on their financial path. The bank uses rigorous training and skill development so that all employees can handle all functions with a customer.

“We got rid of the traditional dichotomy of the teller and the banker,” says Bradley. “We design our branches around the experience. If you walk into any new branch, you’ll see no teller line, but instead individual bankers and stations where a customer can accomplish all of their needs.” 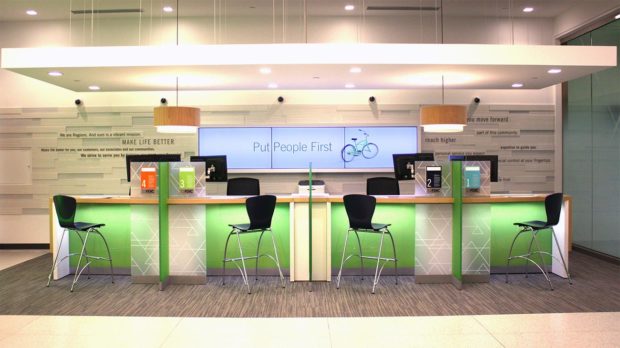 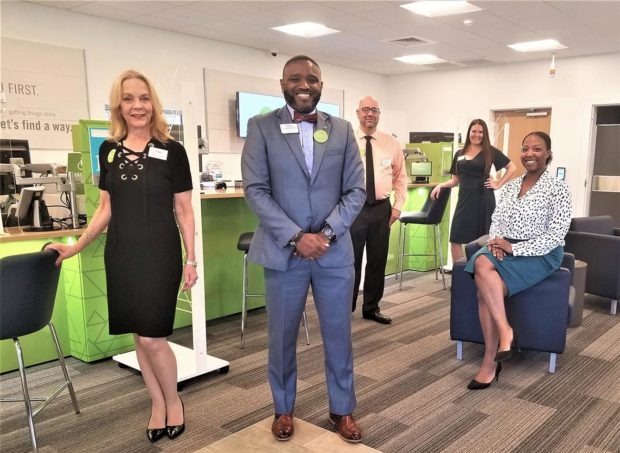 At all new branches, Regions is creating open, inviting spaces, staffed by bankers with advanced skillsets, such as the team pictured above at a new branch in Charleston, S.C.

Branch transformation is not only for large banks. Solarity Credit Union rolled out a modern branch concept in the spring of 2021 as the world started to reopen from the pandemic shutdown. Instead of a traditional layout with teller lines, routine transactions are handled by self-service “smart ATMs.” Former tellers now serve as “Branch Experience Guides” who help customers navigate the new ATMs, offer digital banking expertise and connect them to loan or mortgage experts.

Solarity first piloted the concept before the pandemic but has since converted all six of its branches to this model, CEO Mina Worthington reports. The transformation has increased staff efficiency and improved customer satisfaction, she states. Wait times, which used to be a common complaint from customers in the old branch model, are no longer an issue, says Worthington. “Members feel empowered they have more time back in their lives because they have an easier way to conduct their financial transactions,” she states.

Solarity’s Member Satisfaction Score (MSAT) climbed 80% in a year’s time, the CEO reports. The score moved from 45 points in April 2021 to 81 in March 2022, even as the percentage of heavy branch users fell to 9% from the pre-pandemic figure of 15%. 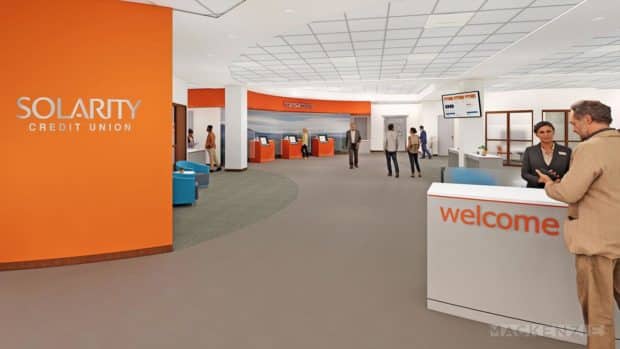 Worthington strongly believes a consultative approach is key to the future of community banking. Getting there will take some work, however. “Our members and customers don’t see us as somewhere they go for advice. And so we want to change that,” she said in an earlier interview. The new approach to branch banking is a key part of that evolution.

In June 2022, PNC also announced a plan to convert roughly 60% of its approximately 2,600 branches nationwide into a technology-focused model over the next five years. These branches will eliminate teller windows and push basic transactions to machines so staff can focus more on giving financial advice.

The broad rollout is the culmination of what PNC began in 2018, when the bank began opening “solution centers” in lieu of branches. These 2,500-square foot locations combine physical and digital banking, enabling customers to consult with staff and conduct transactions via ATMs, kiosks, and video teller machines. 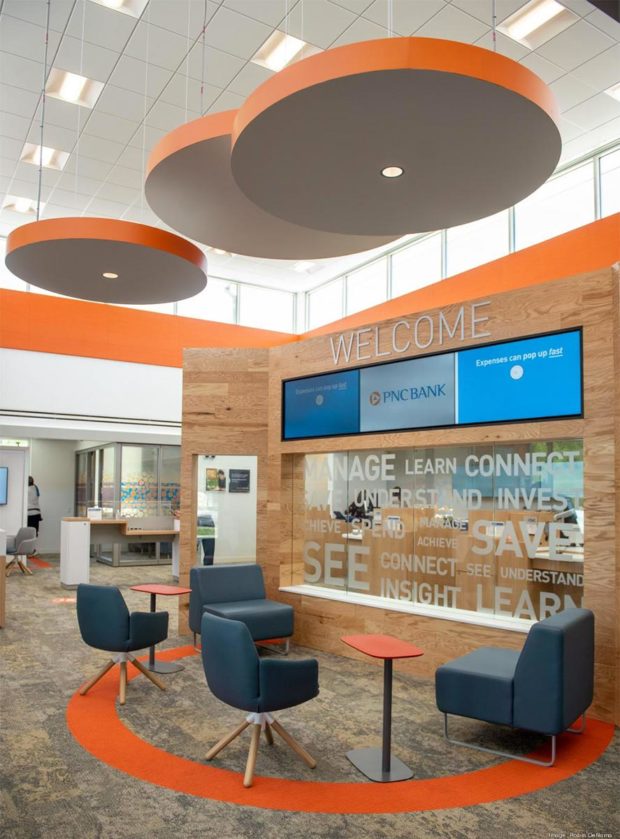 “The goal is to provide spaces where customers are comfortable,” says Kevin McCann, Executive Vice President and National Territory Executive for PNC. “We wanted to establish a collaborative relationship, using our equipment and our environment to work together with customers to achieve their financial goals.”

A Greater Focus on Knowledge

As banks and credit unions transition branches to experience centers grounded in financial advice, their staff will need new skillsets, observes Bleedorn. New branch staff positions are far from entry level. They’re a much higher level of employee than is the case with most teller jobs, often requiring expertise in cross-selling and digital enablement and a deep knowledge of banking products. “It requires a wholesale staffing shift,” Bleedorn states. “Banks and credit unions have to invest in their people, and in more training, even for salespeople.”

Working in a bank branch too often was a dead-end job. Now it has long-term career potential again.

Solarity’s Branch Experience Guides are more trained than ordinary tellers, says Worthington. While tellers were there “mainly to take orders,” these guides have a greater ability to engage in conversations and interview members to get to the bottom of their needs.

At Regions, Bradley notes the evolution of the branch banker has made it more of a long-term career with greater room for advancement. The bank has even received more interest from branch employees working at competitors who see more opportunity in roles that enable them to develop their skillsets.

Regions typically seeks staff with a heavy customer service mindset then trains them with skills and banking knowledge to understand and assist customers. “It’s really about a customer experience mentality first, because we are going to train them to be a banker if they don’t have that background,” says Bradley.