Subscribe Now Get The Financial Brand's FREE Email Newsletter
More people like their banks and have gone to a branch, a massive consumer survey finds. Though this might sound like great news for traditional banks, the numbers are just part of the story. Beware of making the wrong assumptions about what’s driving those numbers.

More consumers say they have visited a branch in the past year and more of them are happy with their financial institution.

This third annual survey — which Opinium Research conducted on behalf of the consulting and software design company EPAM Systems — compiled responses from 28,000 people in eight countries, including 5,000 people in the United States.

The results offered some much-needed good news for the banking industry, with 82% of people saying they were satisfied with their financial institutions in 2022, up from 79% in 2021.

Yet anyone who stops reading there risks missing what underlies the data. Though people say they’re happy overall, the modern consumer’s opinions about banking are nuanced, constantly evolving, and sometimes even contradictory.

In short, consumers are looking for more from banks and credit unions, even if they don’t broadcast it.

The Catch-22 of Bank Branch Popularity

As counterintuitive as it might seem given digital banking trends, a majority of people still found a reason to visit a branch this year. Globally, 85% of the survey respondents went to a branch at least once in 2022, compared with 79% who said the same in the 2021 survey.

In the U.S., more than half of the survey respondents (55%) said they visited a branch once a month — and 8% claimed to go just about every day. In addition, more than a third (38%) said that having a local branch nearby was an important consideration to them when choosing a banking provider. 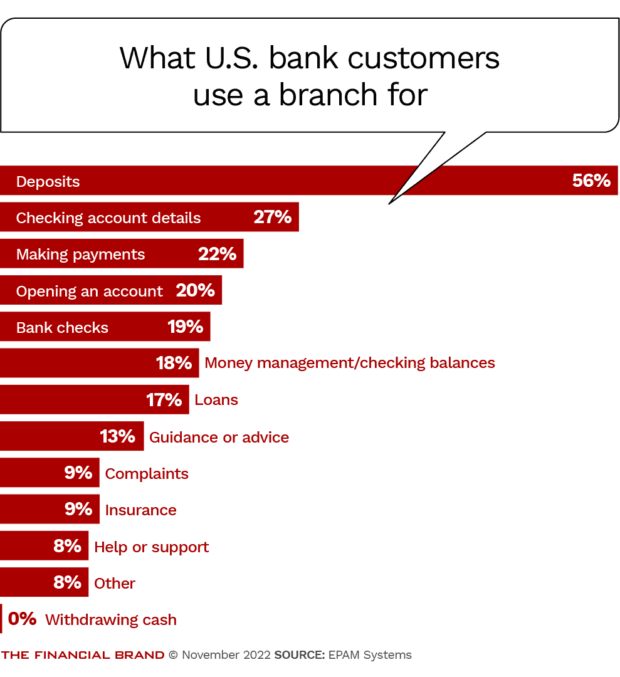 Jimenez cautions community bank and credit union leaders against drawing the wrong conclusions about those branch data points. One community bank executive told Jimenez that 80% of his institution’s checking accounts are opened in the branch now, and that it planned to put less focus on digital investments as a result. To Jimenez, this wasn’t the right response.

His perspective is that financial institutions need to make things easy to do online, so fewer consumers have to visit a branch. “There is a reason why they’re going to the branch,” Jimenez says. “You’re making them go to the branch, because you’re not providing them with a good [digital] experience.”

Even if people show renewed interest in branches in the wake of the pandemic, other trends point to the growing importance of an aggressive digital strategy. For example, most consumers are doing business with multiple banking providers, and typically have two or three products and services from places other than their primary financial institution, the survey shows. The mix of providers includes fintechs and neobanks.

The EPAM report refers to this consumer trend as the “unbundling” of accounts and warns that it could be a vulnerability for community banks and credit unions.

Jimenez argues that digital should be a customer’s go-to channel for mundane tasks — especially in the case of younger customers.

In a recommendation that echoes many consultants, EPAM’s report urges banks to designate branches for high-value services and establish it as the place to go for financial education and conversations about financial wellness. 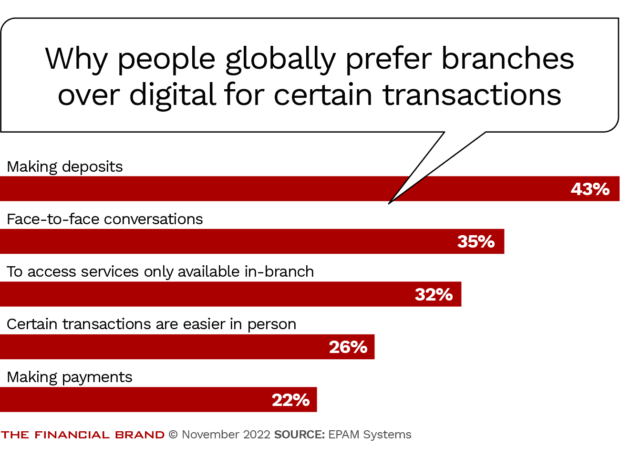 That might require improvements on the digital front. Notably, 32% of survey respondents went to a branch to access services they could not get any other way, an indication of digital shortcomings.

But Jimenez points out that more than a third of the survey respondents (35%) said they enjoy the face-to-face interactions at their local bank or credit union’s physical branch. This points to the relationship-building value of the branch, he says.

Though branches continue to play a meaningful role in providing basic services for some customers — small business owners often go there to deposit cash, for example — banks and credit unions should pivot their branch strategy to provide more “advisory and educational” services, Jimenez says. This would “add more value and meaning to their customer relationships.”

Jimenez also points out that many Gen Zers and Millennials like the way their local community banks and credit unions reflect their values, yet still turn to larger institutions for their vast digital capabilities.

“What I’ve gotten from younger people is that they don’t like to bank with big banks,” Jimenez says. But they do so anyway because big banks offer more services, more ATMs and more technology.

EPAM’s survey results make it clear that consumers enjoy face-to-face interaction and the service they receive at a branch location. Yet the overwhelming majority (77% globally, 74% in the U.S.) would dump their bank if another offered a sweet enough lure.

One out of ten Americans said they would switch just for another institution’s better branding. “Whatever the case may be,” the EPAM report says, “consumers continue to seek out the next product or service elsewhere.” 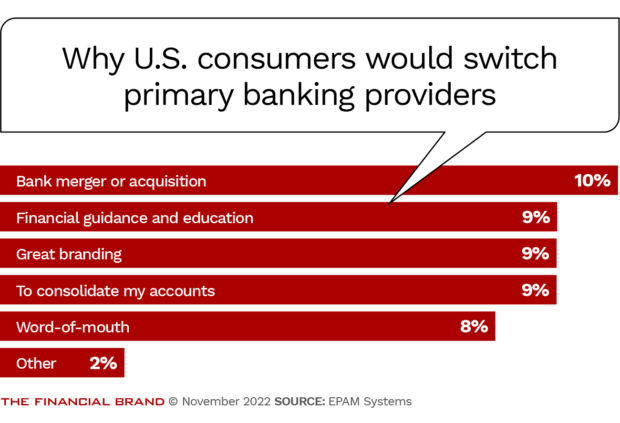 But just as concerning as those who are open to switching are those who are actively unbundling. That is to say, they don’t rely on one banking provider to meet all of their needs.

More than three-quarters (77%) of the survey respondents globally have additional banking accounts besides those with their primary financial institution. That’s up hugely from 36% in the 2021 survey.

Of the respondents who have additional banking accounts, the average number of such accounts is 2.2 globally (2.4 in the U.S.).

People simply “do not want or need to get everything in one place,” Panos Archondakis, EPAM’s vice president of account management, writes in the report. “Consumers now have the luxury of choosing where to source specific services.”

The survey found that people divide their money among various financial institutions for a multitude of services, such as credit cards (as 43% of respondents indicated), savings accounts (31%), investments (18%), and mortgages (16%).

“Consumers now have the luxury of choosing where to source specific services.”
— Panos Archondakis, EPAM

Jimenez says fintechs and neobanks are relatively new in this mix of competing financial providers. But people have been working with multiple traditional banks for a long time — moving a mortgage from one big bank to another with a better rate, for example, while keeping their checking and savings accounts at their local bank with a branch down the street.

It happens because many people don’t believe their banks can give them the best deal on all their needs.

But even so, people would prefer to have all their banking information in one place, if not all of their accounts, the report emphasizes.

A Financial Dashboard Is High on the Wish List

The desire to consolidate financial information is especially prevalent in young adults: More than two-thirds (68%) of people ages 18-24 globally said they are interested in or are using bank aggregation tools, compared with roughly one in 10 people who are 75 and older (12%).

The report urges banks and credit unions to offer these consolidation tools, saying they are “misunderstanding what it is consumers actually want, or more egregiously, are failing to communicate when a viable alternative is already available through the bank.”

EPAM recommends using tailored marketing campaigns to incentivize customers to try out a product better suited to their needs before they get pulled away by another institution (traditional or disruptor).

“Convenience and fragmentation introduce new opportunities for challengers looking to help customers aggregate their financial services products,” Archondakis says. “Focusing in on aggregation, or ‘rebundling’ these services, provides a point of consolidation for client data, offering a unique opportunity for these providers to gain deeper insight across the entire spectrum of customer activity.”