When you think of global leaders in digital banking, the conversation must start with Tencent-backed WeBank, the first digital-only bank in China. Launched at the end of 2014, WeBank has experienced astounding growth, with digital technology that is considered an industry best. Today, WeBank has over 200 million customers and is the leader in assets, loans, net profits, return on equity in the Chinese digital banking space.

WeBank was founded with the mission of providing “affordable, accessible, appropriate, and sustainable” banking services for underserved individuals and small businesses. As opposed to being a bank with technology advantages, it is a shining example of a technology company with banking licenses.

We were granted an exclusive interview with Henry Ma, executive vice president and CIO of WeBank who I met back in January when I visited WeBank in Shenzhen. During the interview, Ma discusses WeBank’s mission of delivering financial inclusion at scale by leveraging AI, blockchain, cloud computing and big data. 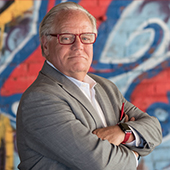