Smaller banks and credit unions often feel exploited in the world of technology.

Typically they feel like they are just an afterthought in the eyes of technology providers and have to just take what they are offered without any real say.

It’s a great source of frustration, says Jason Henrichs, CEO of Alloy Labs, which works with many of them. He tells the story of one community banker he knows who was meeting with someone from a major payments provider who felt the deal offered “amounted to a mob shakedown.”

That’s been characteristic of the attitude many smaller financial institutions have had towards permitting their payment cards to be loaded into Apple Pay. The tech giant charges the issuers a fee each time a transaction goes through their digital wallet, something that neither Google Pay nor Samsung Pay do.

Over 4,000 U.S. financial institutions allow their cards to be uploaded into the Apple Pay wallet, and many of them are smaller players. Such fragmentation among users is something Apple historically takes advantage of, according to Henrichs.

Yet many institutions have been holdouts, digging in their heels, resenting the unequal relationship. Payments expert Richard Crone of Crone Consulting has urged smaller players to get over that, and let their customers upload their cards, in order to obtain volume they’re missing. Apple Pay dominates the digital wallet sphere in the U.S. But many still resist.

The collective frustration over Apple’s fees came to a head in mid-July 2022 when Iowa-based Affinity Credit Union, with $137.4 million in assets, sued Apple, initiating a class-action claim that charged the big tech company with harming institutions, competitors and consumers with monopolistic practices.

Lawsuit Opens a New Front in Battle Against Apple’s Rules

The role of big techs in financial services keeps growing and Apple exemplifies the movement. Beyond Apple Pay, among its financial activities are a partnership with Goldman Sachs to offer the Apple Card, and its announced plan to launch a buy now, pay later service, called Apple Pay Later, in the fall of 2022.

Affinity Credit Union filed its proposed class-action lawsuit in the U.S. District Court of the Northern District of California on July 18, 2022. Among the allegations, the suit claims that Apple:

• Dominates not only the mobile device market, but also the mobile wallet field by requiring that Apple device owners use the Apple Pay wallet. This means that iPhone owners can only do “tap and pay” payments with cards loaded into Apple Pay.

• Prevents owners of iPhones from using other mobile wallets such as Google Pay and Samsung Pay on their iPhones, effectively, by barring their use of Apple devices’ Near Field Communication (NFC) functions. NFC is a type of signal permitting a wireless connection with a payments terminal.

Doing so “secured for Apple Pay a 100% monopoly in the market for Tap and Pay iOS Mobile Wallets,” states the company’s complaint. “There is not one competitor with even a sliver of this market.” 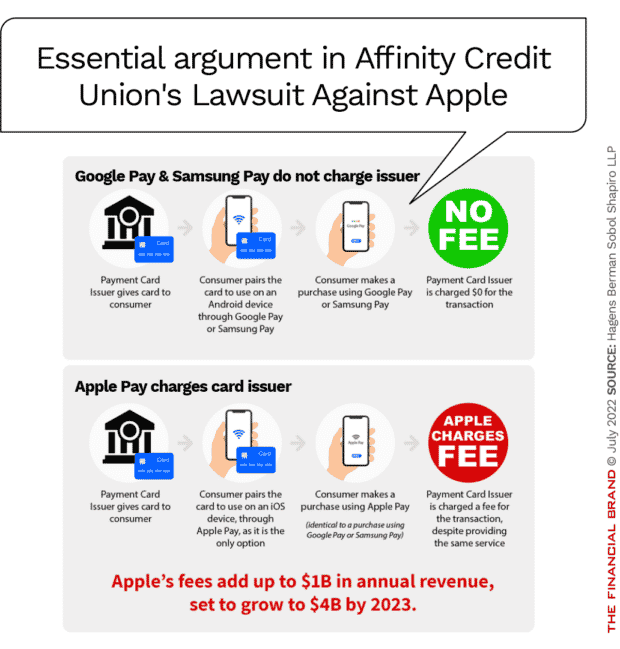 • Charges card issuers 15 basis points for credit transactions and a flat fee of half a cent per debit transaction. The complaint estimates that these fees generated $1 billion for Apple in 2019 and projects that it will quadruple to $4 billion by 2023. Google Pay and Samsung Pay don’t charge issuers any such fee, the complaint states, and could offer Apple competition if they could access Apple devices’ NFC chip.

“In the Android ecosystem where multiple digital wallets compete, there are no issuer fees whatsoever.”

In addition, the complaint points out, “Apple charges these fees even though payment networks handle virtually all aspects of an Apple Pay transaction. … Apple’s role is basically limited to storing account tokens and transmitting them to the merchant through the NFC interface.”

• Bars issuers from imposing a surcharge on consumers who make payments using their cards on Apple devices. “This rule prevents issuers from using differential pricing to drive cardholders to lower cost alternative modes of payment,” the complaint says.

• Combines the functionality of Apple Pay’s tap and pay service with its ecommerce usage, costing issuers more. In this way issuers are charged the fees mentioned earlier if a cardholder makes mobile or online purchases through their Apple wallet rather than using the card directly. Issuers can only allow customers to load their cards on an all-or-nothing basis — uploading means the fees apply to both tap and pay and mobile and online purchases through Apple Pay.

Read More: Taking Digital Wallets Beyond Payments by Turning Them Into ‘Super Wallets’

Building the Case for a Class-Action Suit Against Apple

The lawsuit attempts to establish a class of issuers sharing the complaints of Affinity Credit Union, which participates in both the Apple Pay and Samsung Pay wallets. The website of the class-action specialist firm handling that aspect of the case, Hagens Berman Sobol Shapiro LLP, contains contact information for institutions that want to join the class suing for remediation by Apple.

How did Affinity come to be the initial plaintiff? The credit union had contacted Sperling & Slater, another law firm, regarding Apple Pay fees, according to Steve Berman, Managing Partner at Hagens Berman and co-counsel for the complaint. Sperling & Slater had worked on an earlier class-action suit with Hagens Berman.

“It seemed natural to team up against Apple,” says Berman. “There emerged the case from the numbers we ran, vis-à-vis Apple’s cornering of the mobile device market.” Berman says that additional prospective financial institution have already contacted the firm in interest of joining the class action.

The Financial Brand reached out to Apple for a statement but received no reply. Hagens Berman has reached major settlements in two earlier class-action antitrust cases against Apple. In a case in earlier 2022 the firm represented iOS developers claiming harm from Apple App Store policies, resulting in a $100 million settlement. In a 2015 case Apple and publishers had been sued over price-fixing involving ebooks, resulting in a $560 million settlement.

In this case the law firms are seeking repayment for issuers’ losses due to Apple’s practices and pricing and an end to both.

Attention to big tech firms’ payments activities has been growing in both the U.S. and the European Union.

In the E.U. antitrust proceedings began against Apple in mid-2020. This pending case deals with the company’s Apple Pay practices. In early May 2022 the European Commission told Apple that it had formed a “preliminary view that it abused its dominant position for mobile wallets on iOS devices.” Specifically the message concerned not permitting other wallets to access the Apple devices’ NFC capability.

“Mobile payments play a rapidly growing role in our digital economy,” the commission stated. “It is important for the integration of European Payments markets that consumers benefit from a competitive and innovative payments landscape.”

In the U.S., the Consumer Financial Protection Bureau opened an inquiry into big tech payment activities, including Apple, in October 2021. That inquiry continues. So far what CFPB has had to say seems to focus more on data privacy issues than pricing. Lina Khan, who heads the Federal Trade Commission, sent a comment letter for the file at CFPB that noted that big techs have been trying to engineer payments to keep consumers within their own suites of products.

“Keeping consumers within their ecosystem through the ecommerce lifecycle translates to additional data streams about consumer spending behavior and advertising effectiveness that could potentially be leveraged by these companies for further market expansion and finely grained consumer profiling and targeting,” Khan wrote.

A controversial bill that may pass the Senate would, among other things, bar big techs from giving preference to their own products on their platform.

Outlook for the Class Action Suit Against Apple

There are some risks for Affinity and other institutions that join the suit, suggests consultant Richard Crone. A key one that he sees concerns their own members or customers.

“There’s a big risk that their most lucrative customers are using Apple Pay,” says Crone. If the lawsuit were interpreted as interfering with that usage, he continues, “it could be a public relations nightmare. It could be a motivation to move accounts to another institution.”

Crone says one stumbling block for the case is that Mastercard and Visa “doubled down on NFC in order to protect their own franchise. That would be hard to rebut.”

Alloy Labs’ Jason Henrichs says that some banking executives he’s spoken with understand the point of the lawsuit, but consider it something of a “Quixotic Quest.”

“Infrastructure providers to banks have all of the bargaining power,” says Henrichs.

Going up against Apple is an ambitious move, though the credit union’s law firm has two settlements under its belt.

Henrichs adds that while the argument that Apple is running a monopoly is attractive, there’s another side to this. Some, he says, could say that anyone who creates a platform ought to be able to set the rules, determining “who gets on and who gets off.” He adds that he personally favors openness because more people will work with an open platform in the long run.

Read More: Is PayPal Now a Bigger Threat to Banks than BofA or Chase?

Could Apple Reverse Its Own Practices?

There is speculation that the lawsuit and the situation in Europe could be an opening for Apple to change its business approach, at least in part.

Mercator’s Hirschfield thinks Apple could be inclined to make a shift that it has to make in one major market the rationale for a broad change in many markets, rather than attempting to run multiple approaches simultaneously. While the fee is “low-hanging fruit,” Hirschfield says it’s possible Apple could find another way to profit. One might be to capitalize on the greater volume of transactions that could go through Apple devices if iOS versions of Google Pay and Samsung Pay could work on them.

“It’s early days in the lawsuit,” says Hirschfield, “and it’s still early in Europe too. Apple’s got a long runway before this really needs to be solved.”

The wrinkle that could change things is the expansion of what digital wallets will do going forward.

Moving beyond banking and payments to roles such as carrying government IDs changes the nature of this technology. In late July Google announced the re-introduction of the Google Wallet brand, alongside Google Pay. The wallet, which consumers will be able to access from Google Pay, will be able to handle payments but will also be able to handle tickets, transportation passes, vaccination passes, digital car keys and more, according to Google.