Subscribe Now Get The Financial Brand's FREE Email Newsletter
Consumers are starting to take to digital wallets in a bigger way as technology makes it possible to add digital ID, investments and even cryptocurrency to them. Not all consumers want to put their whole life into a mobile device, but it's a trend that could diminish banks' role.

If a growing chorus of predictions holds, 2022 may go down as the year that use of digital wallets became a majority practice in the U.S. and globally. It may also be the year that banks see their strategic role shrink in the ongoing development of a digital economy.

Digital wallet usage has been gathering speed in recent years. Fiserv’s “Expectations & Experiences” consumer trends survey found that in 2021 almost seven out of ten consumers (68%) had used a digital wallet in the past 12 months, besting 2020’s 58% and 2019’s 51%.

The FIS report projects that digital wallets will pass use of physical credit cards in 2022 and will represent almost a third of U.S. e-commerce spending. The report says this will be led by Apple Pay, Amazon Pay, Google Pay and PayPal.

Gartner has projected that digital wallets are among five technologies that will have high impact on ecommerce over the next two years.

In a chicken-egg observation, Juniper Research states that “one of the key drivers of mobile commerce is growing consumer acceptance of digital wallets, although the specific wallets and payment methods vary by country.”

In the U.S., CivicScience found in a major survey that three out of five Americans are using a digital wallet, with more than a third indicating that PayPal is their digital wallet of choice.

“PayPal has cornered the digital payment market,” says CivicScience. “Even though some may not use PayPal as their primary digital wallet, all in all, a whopping 46% of the population uses PayPal to make transactions online.”

The firm reports that convenience, followed by security, are the top reasons for the choice. Interestingly, one in ten PayPal users told CivicScience that the main benefit of using PayPal is PayPal Credit, a credit line users can tap at participating merchants. 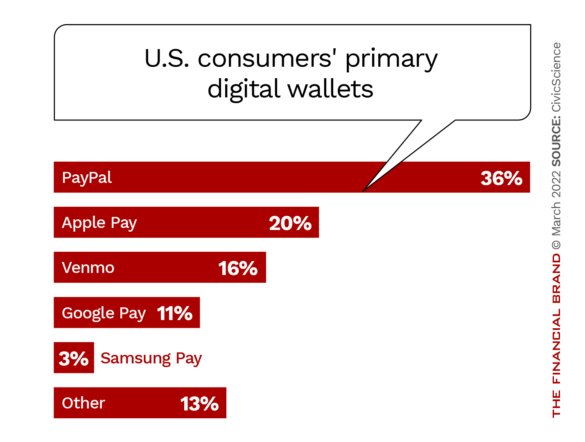 An important point to understand is that while many more people are using digital wallets than a few years back, a bit over two out of five consumers who shop online say they still use credit or debit cards or bank accounts for all or nearly all of their purchases. At present, as the chart below indicates, only one in five consumers shopping online say they make most or all of their purchases with a digital wallet.

The concept of “digital wallet” is fluid. CivicScience, for example, includes Venmo, for example, which operates quite differently from, say, Apple Pay. 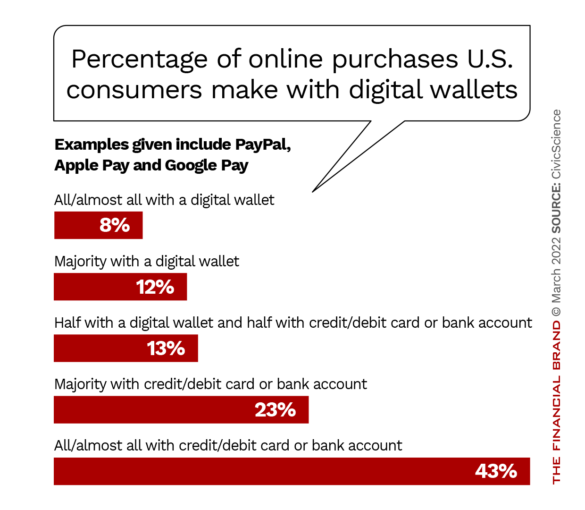 “Banks as a whole remain far more trusted than digital wallets. Just a fragment of the population [10%] trusts digital solutions over traditional banks and financial institutions,” the study states. In fact, CivicScience analysts suggest that much of the warming up towards digital wallets is due to consumer acceptance of PayPal.

However, acceptance of digital wallets is moving beyond ecommerce and major chains.

The Main Street Index from PYMNTS.com and Melio found that 41.3% of small businesses surveyed already offer the ability to pay with digital wallets and nearly 30% plan to invest in such technology in the next 12 months. If that pans out, it will put digital wallets about even with contactless cards on Main Street. (45.9% can accept them, and 25.6% plan to invest in the necessary tech.)

This suggests that traditional banking may need to think in terms of partnerships, possibly even “junior partnerships,” to remain part of the mix.

Will Digital Wallets Become ‘One Wallet to Rule Them All’?

The combined power of mobile technology, artificial intelligence and fintech is taking the possibilities of the devices beyond the concept of a “super app” to that of more of a “super wallet.” CB Insights characterizes super digital wallets as super apps with even more ambition.

This would be part of an ongoing evolution. “The future of the wallet is largely being shaped by fintech players like SoFi, MoneyLion, Block [formerly Square], M1 Finance and Revolut, which offer easy-to-use, mobile-friendly platforms,” says a report by CB Insights. “Tech giants like PayPal and Apple are also aiming to become the go-to money management apps, and looking to leverage their vast user networks, brand recognition, and UX expertise to gain quick traction among users.”

The only bank in the research firm’s list above is SoFi, and that’s a nicety of a 2021 charter acquired through an acquisition and approved in early 2022. SoFi’s roots are in fintech.

CB Insights sees wallets becoming repositories for everything to do with people’s lives, from medical records, health tracking and biometrics to document and records storage to financial functions like credit and debit cards and investments and household functions like budgeting and insurance. Cryptocurrency wallets could also fall under the super wallet umbrella.

“Traditional physical wallets are primarily for making payments, carrying our cards and cash — and otherwise disconnected from other areas of our financial lives. In contrast, digital ‘super wallets’ are giving users access to a much wider range of financial resources and tools.”

— from “The Future of the Wallet,” by CB Insights

The report suggests that as this becomes more of a movement in the U.S., the stakes will grow bigger. “Whoever secures the go-to super app status and gains widespread customer trust and adoption will likely become one of the most valuable companies in the U.S.,” the report states. PayPal, it points out, already took major steps on this path, on the financial services front, in 2021. Among the moves taken: addition of high-rate savings accounts, a bill management tool, early paycheck access, and cryptocurrency buying, selling and holding.

Is Consumer Resistance to Digital Wallets a Problem?

Broadening the concept of “wallet” to include digital identification adds to the functionality of a super wallet, according to CB Insights. The number of “papers” that Americans carry has been increasing, including not only traditional ID like the drivers license but also Covid vaccination proof and potentially even recent test results. Attendees at the Oscars had to prove not only vaccination but also provide two recent negative tests performed by a medical professional. 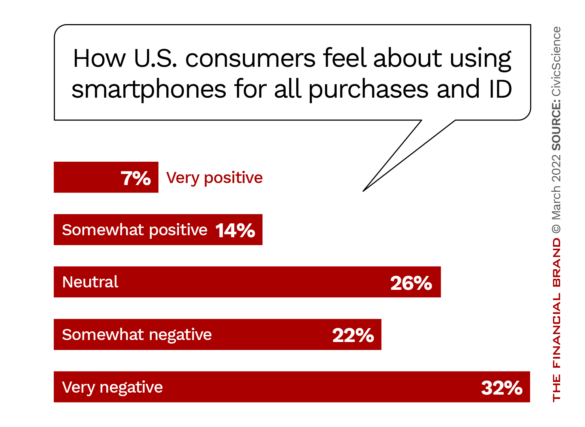 A reality check on digital living may be necessary as financial institutions weigh their strategic choices. In spite of being able to do more and more with digital wallets, many Americans resist centering their lives completely on their mobile devices.

However, as the chart above shows, somewhat surprisingly, many people don’t favor going completely over to digital wallets for both purchasing and storing official identification, with only 21% of the sample being at all in favor of that.