Subscribe Now Get The Financial Brand's FREE Email Newsletter
One in three ecommerce payments will be via wallet in the U.S. as Americans and others catch up to Asia-Pacific users. Cash still isn't dead at point of sale, but by 2025 its influence will be microscopic globally.

By 2025 digital wallet use will account for just over half (52.5%) of ecommerce transaction value worldwide, versus 48.6% in 2021, according to the FIS Global Payments Report. At the physical point of sale, the report states, digital wallet use will rise to nearly 39%, an increase of about ten percentage points from 2021 levels.

That growth reflects increasing and maturing usage in markets where digital wallets dominate the payments mix — notably the Asia-Pacific region — as well as increasing levels of wallet usage in other markets, including the United States. In Europe digital wallets have become the leading ecommerce payment channel, representing about 25% of Europe’s transaction value in 2021 in that space.

There are distinct trends to be seen regionally as well as within specific countries. The 156-page study reviews trends in every means of consumer payment, including cash.

We look at some of the global payment trends identified by FIS and then at the U.S. and broader North American markets.

Globally FIS projects that 12% of global consumer spending will be conducted via ecommerce by 2025, a level already exceeded in some markets. Growth rates will slow in some markets like Asia-Pacific where it is already a major factor, but in other markets like Latin America, and the Middle East it will continue growing at an accelerating rate.

While buy now, pay later remains a small portion of overall transactions by global volume, the study projected significant growth between 2021 and 2025. The study forecast a share of total ecommerce transaction value of over 5% by 2025 for BNPL. The study attributes much of the appeal of BNPL to the common interest-free form made popular by nonbanks, some of which have been experiencing difficulties.

Regarding ecommerce payment preferences, the report noted a continuing shift away from use of cash and credit cards towards wallets and BNPL. However, one factor to consider is that much of the volume paid through wallets draws on credit and debit cards linked to the wallet — essentially, the same account going through a different channel. (FIS considers “digital” and “mobile” wallets the same thing.) 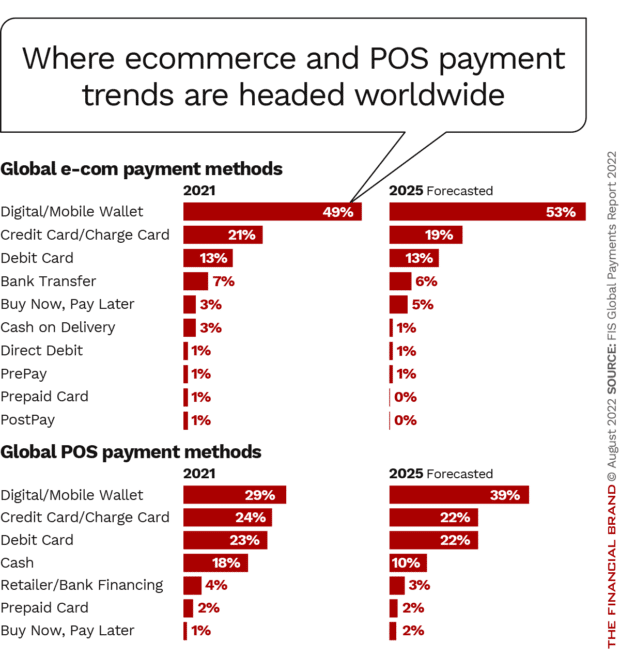 Regarding the use of digital wallets in online and mobile commerce, the report states that “growth will be driven by digital wallets offering superior checkout solutions, flexibility in underlying payment methods, their anchor role in e-com marketplace ecosystems, and local wallets consolidating into regional and global super apps.”

By 2025 about 60% of ecommerce will be conducted via mobile devices globally, versus online, according to the report.

Real-Time Payments On the Rise

Real-time payments methods are expanding all over the world, the study noting that 60 markets globally have some type of real-time payments system in place. In some areas next-generation versions are going into place.

FIS defines a real-time payment as “an inter-bank fully electronic payment system in which irrevocable funds are transferred from one bank account to another, and where confirmation back to the originator and receiver of the payment is available in one minute or less.” There are many iterations of this including use of e-invoicing, QR codes, person-to-person services such as Zelle, and request to pay arrangements.

“Almost three-quarters of the world’s population (around 72%) have, or will soon have, access to instant payments,” says FIS. In other markets, competing real-time payment services are joining those already established.

“The need to innovate is central to real-time payments,” according to the report. “The speed of clearing and settlement is only the first step.”

How Super Will Super Apps Become?

“Super apps are the always-open front door to a new generation of immersive digital experiences,” the report states. “One that uses data, artificial intelligence and the cloud to give users a contextually relevant experience that spans well beyond a single need or purpose, whether that be making a payment or communicating with a friend.”

Just how far super apps and payment services built into them can go remains to be seen. The report points out their strong popularity in China, where “it’s becoming difficult to go through a typical day without using WeChat or Alipay.” Likewise there are Grab in Singapore, Gojek in Indonesia, and KakaoTalk in South Korea.

“For Asia-Pacific consumers, a single app opens doors to virtually everything they need or want to do,” FIS says.

From the perspective of participating merchants and payments firms, a super app can be a walled garden favoring the companies inside it.

However, in spite of the boosterism seem for super apps in other regions — it’s considered a key PayPal strategy, for example — cultural differences in markets will play a role.

“People in the East tend to be very happy to have a single source for everything, but in the U.S. and Europe, that’s not necessarily the case,” says Phil Pomford, SVP and General Manager of Global E-commerce for APAC for Worldpay from FIS.

For many years U.S. bankers loved the idea of financial one-stop shopping and the idea of cross selling consumers on everything they needed was an ideal. Neither ever quite worked out as intended, and nowadays more chips seem to be on the idea of market-based open banking, in the U.S.

Read More: How Revolut’s ‘Super App’ Strategy Could Shake Up Banking in the U.S.

Payments Trends in North America and the U.S.

Though nowhere near levels seen in the Asia-Pacific region, digital wallet use is projected to rise to 33% of ecommerce payment volume in North America by 2025. More immediately, FIS expects to see use of digital wallets take the lead over direct use of credit cards in 2022 in the U.S. The dominant brands will be PayPal, Apple Pay, Google Pay and Amazon Pay. (In the report, FIS considers North America to be Canada and the United States.)

By contrast, in the U.S., credit and debit cards will continue to dominate payments at the point of sale, though by 2025 their share is predicted to fall off slightly at POS.

Cash isn't dead in the U.S., still accounting for just over 11% of POS transactions. However, by 2025 this is expected to fall below 6%. 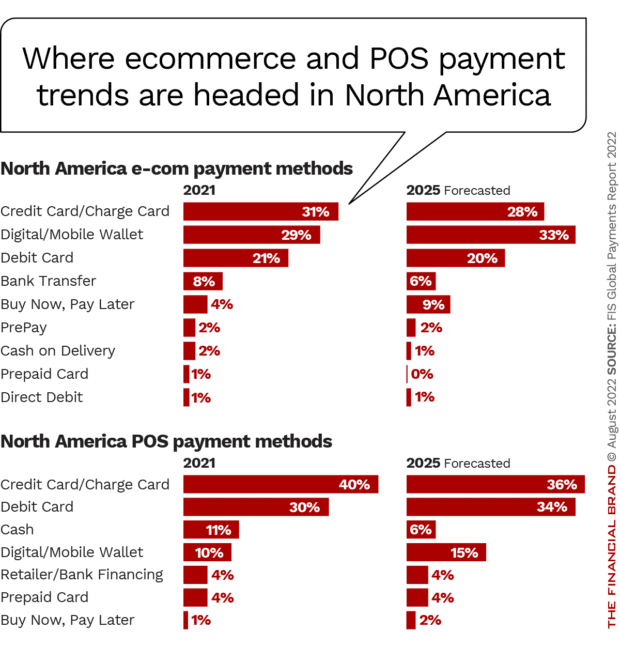 In the U.S., real-time payments currently include The Clearing House’s RTP service and P2P services such as Zelle, Cash App and Venmo, to be joined in 2023 by the rollout of the Federal Reserve’s FedNow programs.

In the area of buy now, pay later, the continuing popularity of this channel in the U.S. led FIS to project that it would grow by a compound annual growth rate of 35% for ecommerce and more than 50% at point of sale.

This region is where digital wallets first began to overshadow other payment methods. Digital wallets’ dominance there will continue, however the rate of growth will slow somewhat, the report states. In 2021 digital wallets comprised 68.5% of the region’s ecommerce value. FIS projects this to rise to 72% or beyond by 2025. 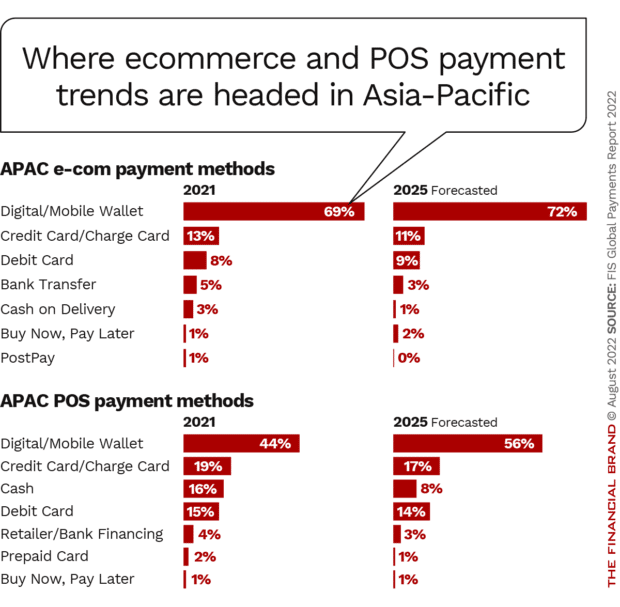 “Outside of China,” says the report, “cash and cards are the leading POS method in APAC. In some markets, such as Thailand, much more than half of transaction value is still exchanged in cash. Regionally, however, cash is forecast to fall to under 8% at the point of sale by 2025.

While buy now, pay later is a small factor currently, it could pick up with the recent addition of a BNPL feature to WeChat.

More than a dozen markets in the Asia-Pacific Region now include some level of real-time payments. India and China lead the region by raw volume of RTP payments, but on a per-capita basis South Korea and Thailand have seen a greater level of adoption.