Subscribe Now Get The Financial Brand's FREE Email Newsletter
12-month study finds wide swings in redemption frequency and amount, and confirms the popularity of this category of reward cards. A high percentage of cardholders opt to apply the reward as a statement credit. Can Apple Card make a dent in this competitive market?

Consumers love their credit cards. This enduring relationship in the face of so many other payment options is due in no small part to the hugely popular rewards-card programs in place with most major issuers. Even Apple Inc. recognized the power of this perk to boost transactions, loyalty and revenue by embedding a cash-rewards credit card in its Apple Pay mobile wallet.

More than half of U.S. adults (57%) have at least one type of rewards credit card, according to CreditCards.com. The most popular reward choice by a wide margin are cash-back cards at 43%. The next most popular are gas/retail (28%), followed by airline/hotel at 13%, general travel at 12% and business 8%. “About three-quarters of rewards card holders have at least one cash back credit card,” writes Ted Rossman in a blog. Some 52% of rewards cardholders have redeemed for cash back within the past year, and another 29% have swapped their points for gift cards, which are almost the same as cash.”

Marketing for cash back and rebate cards grew significantly in 2018, reports Mintel Comperemedia in its annual Credit Card Marketing Review. Direct mail volume alone increased by 16% year-over-year and was the only rewards category to grow. This was fueled, Mintel states, by the launch of unique dining/entertainment-focused cash back cards such as Capital One’s Savor and SavorOne, and by increased focus on everyday spending cards like Discover it and the newly launched Bank of America Cash Rewards card.

In the overall card reward universe, past research suggests that about a third of rewards go unused. This is particularly true of travel rewards. Cash-back rewards are not always redeemed either, but many of the programs allow the rewards to be used as statement credits, sometimes automatically. “This makes them uniquely situated to serve people who don’t have the desire to manage their points and miles,” Forbes observes.

BankAmericard Cash Rewards
3% cash back in a category of the cardholder’s choice
2% cash back at grocery stores & wholesale clubs
(for both 2% and 3% the first $2,500; then 1%)
No annual fee; unlimited cash back

Cash-back cards allow redemptions in a variety of ways. These include gift cards or a check, the traditional ways, but statement credit is a popular option now, states Greg Flemming, Senior Vice President at Kantar. The fact that only four out of ten consumers pay their rewards cards in full each month, by one measure, may be one reason for the popularity of statement credit. It lets the cardholder shrink the reckoning.

Kantar’s research finds, however, that consumer use of the statement credit option varies greatly among the top issuers and among individual card offerings of those issuers. For example, Flemming says 73% of cardholders earning cash rewards on the American Express Blue Cash card redeem them for statement credit compared with just 30% of Bank of America’s Cash Rewards credit card. “The reason for the lower BofA number,” Flemming tells The Financial Brand, is that if you have a Bank of America checking account you get can get extra points or extra cash back if you deposit the rewards into your bank account.”

Capital One Quicksilver
1.5% cash back on all purchases
No annual fee if good credit; unlimited cash back

Results for the other cards Kantar studied fell between Amex and BofA: 60% of Capital One’s Quicksilver cardholders redeem for statement account credit, and between 40% and 50% do so for the Chase Freedom and Freedom Unlimited cards.

Although the average number of cash-back redemptions per month among the 11 card-issuing institutions studied is steady at 1.2 per month, and the average amount redeemed is $68 (ranging from a high of $78 in December to a low of $63 in July), those averages paint only a part of the picture. Looked at as a 12-month total, there is great variation in both the number of redemptions and total amount redeemed among cardholders with one or more cash-back transactions. 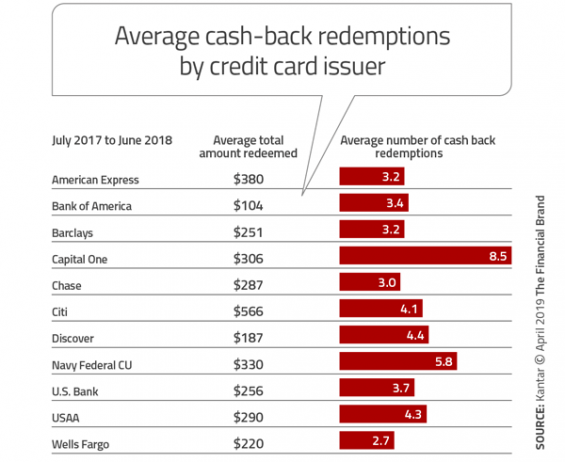 The research and consulting firm drilled down to look at seven distinct card products from among the 11 issuers. A similarly wide range shows up for both average number of redemptions and average total amount redeemed among these card products. 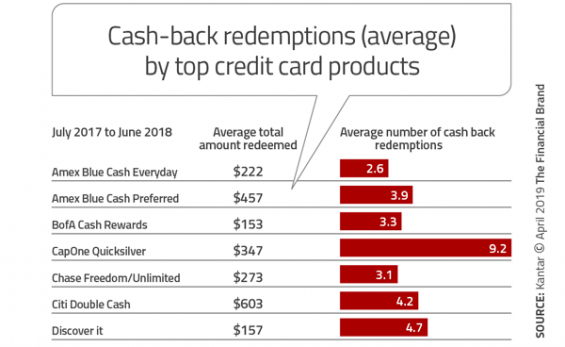 Whether looked at by institution or by product, Citi cardholders get the largest average redemptions and Capital One cardholders redeem their rewards most often.

The Citi Double Cash card is essentially a 2% cashback card, typical of the group overall. “The reason you’re seeing so much variation in the average redemption amount isn’t so much that these cards are offering more rewards or less rewards,” says Flemming. “It’s really reflective of the different levels of spend on these cards. And for the last year or so we’ve seen relatively high spend on the Citi Double Cash card.” That could reflect types of purchases, marketing, brand strength and other factors besides reward levels.

Citi Double Cash
1% cash back on all purchases, plus 1% when paid for – in full or over time
No annual fee; unlimited cash back

Regarding types of purchases, Flemming says that though Kantar is generally not looking at business credit cards “there could be some people who are running their own business and using their personal cards for business expenses.”

How Will Apple Card Stack Up Against the Top Cash-Back Cards?

As can be seen in the accompanying snippets of the seven cards studied by Kantar, the cash rewards percentages are typically between 1% and 2% for general purchases, but with many variations. Some, like the Bank of America Cash Rewards card, give 1% for most purchases, 2% for other categories, and 3% for gas.

Discover it
1% cash back on all purchases
5% cash back on up to $1,500 in bonus categories that change each quarter
No annual fee; unlimited cash back

The new Apple Card, issued by Goldman Sachs Bank, offers 2% cash back on any purchase made using the card within the Apple Pay mobile wallet, 3% for any purchase of a product sold directly by Apple, and 1% for all purchases made with the physical card — credited daily. Flemming states that the Apple Card is an “interesting card” and makes sense for people who have Apple Pay and use it frequently.

The Kantar SVP sees two interconnected points standing out from the analysis of the top seven statement-cash-back cards:

1. There are some big bucks being earned. “In a year’s time, a number of consumers are getting a significant amount of cash back,” says Flemming, “which speaks to the value proposition of these cards.”

2. Consumers like redeeming often. The data show that many consumers redeem frequently, which means, of course, that they’re not saving up the rewards and then cashing in a big check. “They’re redeeming just about every time they meet the threshold that allows them to redeem,” Flemming notes. “Consumers like cash back cards because they give them the ability to spend some money, earn some cash back, get that cash back immediately, and then start the process all over again.”