Subscribe Now Get The Financial Brand's FREE Email Newsletter
Consumer behaviors are changing so quickly that in the time it takes to plan, fund and complete a branch redesign, new trends may make the changes obsolete. To stay on pace, banks and credit unions can benefit from flexible branch designs that enable them to adjust layouts as needs change.

There’s been a constant drumbeat about the need to upgrade branches to adjust for the dominance of digital transactions and the need to offer advisory services.

Problem is, branch changes take time. Unlike upgrading a mobile app, which can be done in weeks or sometimes less, altering physical facilities can run for months and suck up large amounts of resources — human and capital. And the risk is, just as a bank or credit union unveils a new branch, it may already be time for a refresh.

One emerging solution to this dilemma is the use of open floorplans with flexible spaces that can enable banks to respond more quickly and frequently. The example below is from a branch of Statewide Federal Credit Union in Cleveland, Miss., showing the indoor/outdoor entertainment area that’s part of the branch. 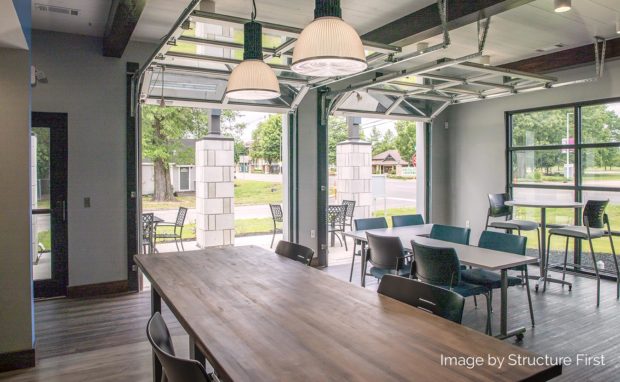 “While there’s no way to future-proof branches, constantly ‘fine-tuning’ your branch environment is easier than waiting for ten years and doing it all in one major renovation when the market may have already deemed you outdated,” says Danielle Havlicek, Creative Director of Branded Environments at DH Creative.

So far, however, most banks and credit unions continue to take an incremental approach to redesigning branches — testing the concept in or two branches before moving on to others. In addition, institutions are gradually transforming their branches to meet the growing need for advisory services. The degree and speed of change often depends on their customer base.

California-based Travis Credit Union, for example, strives to push more transactions to digital and preserve branch staff for engagement and advisory services. Yet, while Travis — $5 billion in assets — is trying to attract younger consumers, older members with “old school banking habits” still prefer to visit its 24 branches for withdrawals and check deposits, says Dena Rothmann, SVP, MX/Chief Retail Officer. Therefore part of their branch reinventions include educating the membership about the availability of digital channels.

“For some of them, it’s a new concept,” says Rothmann. “So it’s not just designing a branch, it’s also a matter of educating people about when to use digital channels and what we can help them with in the branch.”

Likewise, Fidelity Cooperative Bank, a $1 billion institution with 13 locations in Massachusetts, is gradually revamping its banking centers to better support the advisory experience. One element of Fidelity’s redesigns has been implementing “pods” to break down the barrier of the traditional teller line. “It opens up the space, it’s a little more inviting, and enables our colleagues to easily walk around, either sit in an office or at customer service,” says Sheila King-Goodwin, SVP, Chief Retail Banking Officer. “It removes the physical barrier and encourages a different type of conversation.”

But as noted, consumer behaviors and needs are often changing faster than financial institutions can adapt their branches. Customer segmentation can also complicate branch designs, especially for those who want to meet the needs of their traditional banking customers while digitally upgrading to appeal to younger generations.

The Benefits of Flexible Floor Plans

The idea mentioned earlier regarding more flexible branch design practices is intended to address the pressure many financial institutions are facing over the pace of change with their branch networks. Havlicek notes that banks and credit unions can add more longevity to their branches with periodic refreshes rather than major remodels.

“It’s not about starting over,” she says. Light refreshes and reinventions with a flexible floor place can help branches quickly evolve with little cost or interruption.

There are several things banks and credit unions can do to refresh existing branches with limited costs or interruption, she says. By keeping hard walls to a minimum and instead using flexible wall systems and doors, institutions can move layouts between conference rooms and meeting areas to private offices or co-working spaces within branches.

These multifunctional spaces enable banks to adjust their floorplans seasonally or reinvent as needs change. “The lack of hard walls gives you more flexibility,” says Havlicek. “Maybe you have two employees that travel from branch to branch. This gives them a place to meet with people. You can also open up that space for a buffet table when you have an event.”

Open floor plans also allow financial institutions to use more “plug-and-play” fixtures and furniture that isn’t as costly as in-place construction, says Havlicek. These fixtures can be moved between branches as needs change.

Such branding flexibility can benefit branches that cater to multiple markets, as long as they also have trained and informed staff ready to engage different categories of customers.

Portable coffee stations are another element that can turn a low-value amenity into a marketing draw, especially for locations in high-pedestrian areas. In one example, Havlicek noted a credit union replaced a permanent coffee counter with a mobile cart that could be moved around the branch or even outside on a nice day.

The key to creating the right branch design is continuous learning and improvement, says Dena Rothmann. As Travis strives to learn from its latest branch design, it will use customer relationship management software to track conversations and other interactions. The credit union will encourage members to schedule appointments online, enabling it to better track how and why they visit the branch.

The most important measures of success will be greater use of digital channels or more logged conversations in the branch. “We want to see that shift to digital continue. I would also quantify it with online banking enrollments and depth of wallet share,” says Rothmann. “That tells me [members] are having meaningful conversations with our financial service representatives.”