Subscribe Now Get The Financial Brand's FREE Email Newsletter
With consumers fretting about inflation, credit card issuers and others in the payments industry are focusing their holiday promotions on how they can provide value, like cash back or shopping discounts. Even Apple is getting in on the trend, touting 5% off on its products for those who pay using an Apple Card. And the buy now, pay later firms are stepping up their marketing, as they angle to get a bigger share of holiday spending.

‘Tis the holiday season
When we buy, mostly within reason.
But we still like living large
So for now, we still charge.
— American consumers

Inflation and higher interest rates on credit cards are playing the Grinch this year. But consumer spending is still spirited, and the payments industry is doing its part to keep the holiday party going.

What sets this shopping season apart from past years is that concern about inflation has consumers seeking greater value in what they buy, says Andrew Davidson, chief insights officer at Mintel and a frequent contributor to The Financial Brand.

Traditional credit card issuers and other credit providers have recognized this trend and have adjusted their marketing accordingly, Davidson says.

“Going into the holiday season, consumers were saying they were concerned about spending,” he adds. “But they are still spending.” High sales volume on Black Friday and Cyber Monday confirmed that, he says. Not only was card usage up, but buy now, pay later purchases ran high.

Holiday promotions that aim to keep consumers in that spending mood abound, according to Davidson, who actively scans the market for fresh offers and shares his discoveries on LinkedIn. Below is a sampling of what he’s been seeing this holiday season, which he curated to represent the key trends. Most of these promotions come from Instagram.

‘Tis the Season for Savings on Apple

Apple, making the most of its walled garden that includes a streaming service and just about everything else, from music to hardware, offered a special of 5% off on Apple products purchased with new Apple Cards. Time for a new phone? 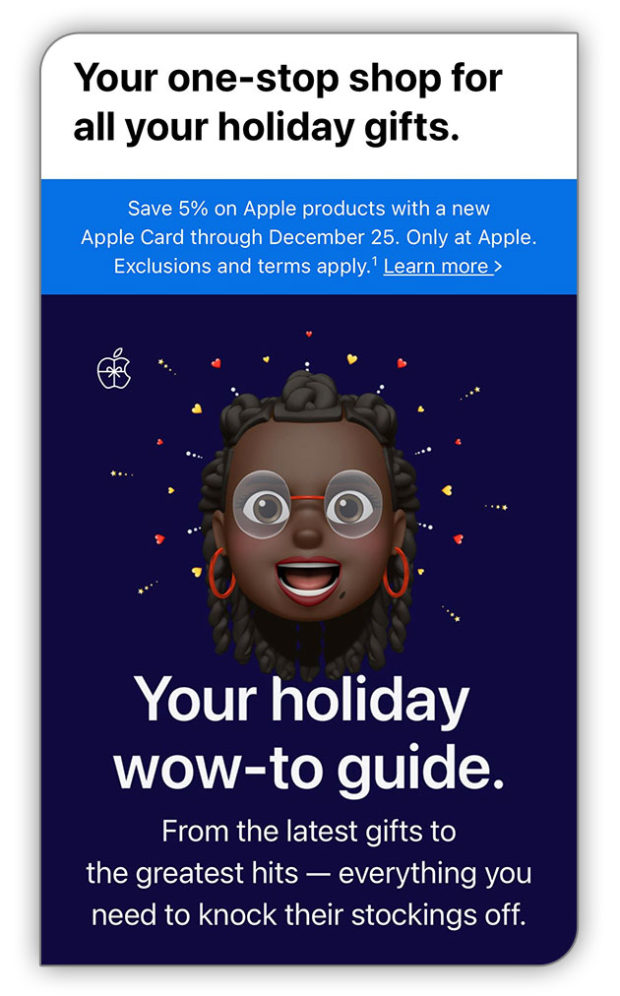 Davidson says the Apple offer was seen by millions of people.

Read More: What the Apple Card High-Yield Savings Account is Really About

Amazon recently began allowing customers to use Venmo when paying for purchases. So Venmo, which is owned by PayPal, has been promoting itself as a good way to do holiday shopping on the ecommerce giant’s website. 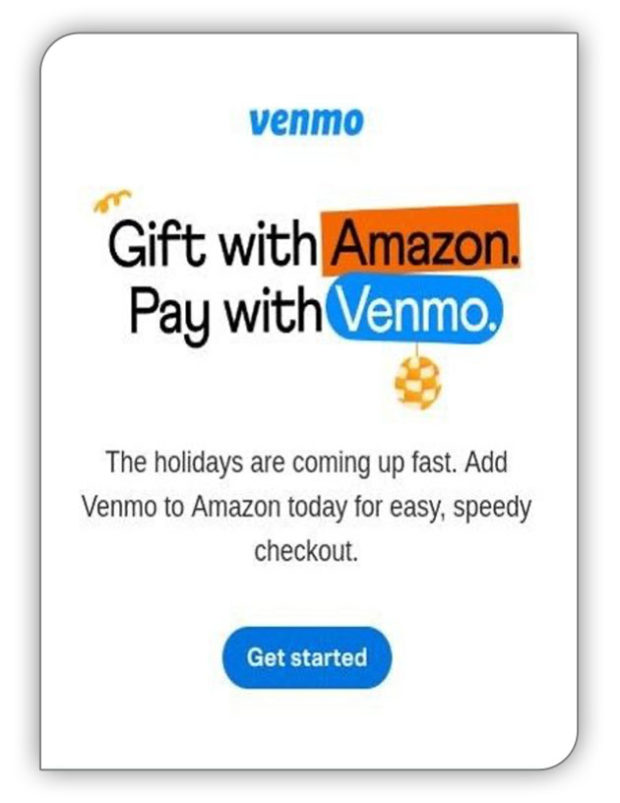 Read More: How Amazon’s Alliance With Venmo Will Disrupt The Payments Space

Extra Cash Back and Extra Miles

To encourage shopping with Discover, the credit card issuer has been promoting its cash-back features. 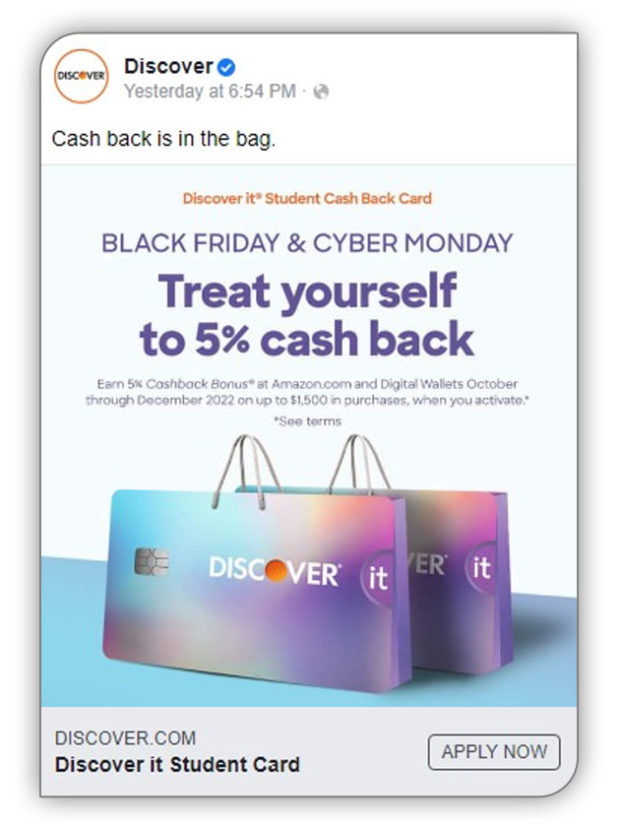 Customers can get a larger percentage of cash back for a few categories of their choice.

One common tactic for the cash-back credit cards has been to up the percentage they’ll return on gasoline purchases, in recognition that many people still enjoy holiday shopping in person and, more often than not, that requires driving.

Chase, which has been promoting its card partnership with United Airlines, offered a different take on that idea for the holiday season, focusing on airline miles instead of cash back. Charges at gas stations earn 10 miles per dollar through the end of the year, while charges at Amazon and at grocery stores earned 5 miles per dollar.

Buy now, pay later companies have been pushing their services aggressively, in an effort to get a bigger slice of the holiday spending. 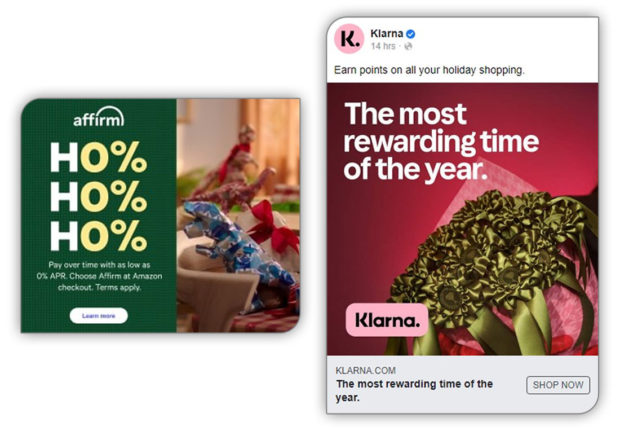 The hunt for value plays into ancillary shopping services, such as PayPal Honey and Capital One Shopping, which automatically find coupon-style savings opportunities while the user shops online. These functions are delivered through browser extensions.

With many consumers being more price sensitive and hunting for good deals, such services are helping to keep sales volume up, says Davidson.

Read More: The Lines Between Credit Cards and BNPL Are Blurring

It’s Not All About Buying More Stuff

Truist has been promoting ways to make the holidays happier without spending up a storm, with its “12 Days of Care” promotion, which includes ideas for simpler homemade gifts people can exchange. For instance, tip #1 is “Create and share a holiday playlist.” 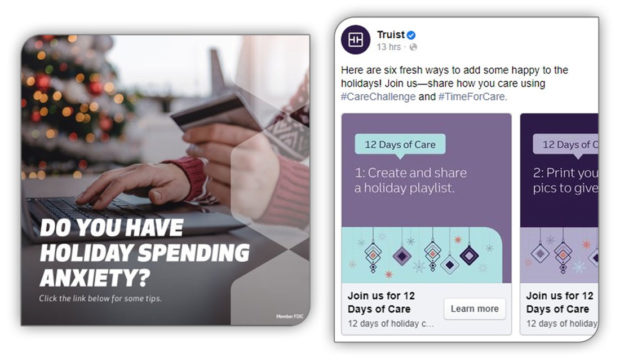 Others are promoting ways to use points as seasonal charitable donations. Discover promotes these by publishing lists of nonprofit organizations that accept its Cashback Bonus rewards.

Happy Holidays
However you choose to celebrate,
May you be able to congregate
At long last
With each and every loved one
For wonderful holiday fun.
Have a blast!
— From all of us at The Financial Brand