Subscribe Now Get The Financial Brand's FREE Email Newsletter
Don't think of the new Apple Savings account as a standalone competitive banking product. Analysts say it's one more brick for building a 'walled garden' of financial and other services for iPhone users that will drive growth of Apple Pay, Apple Card and more of the big tech's offerings.

Many in banking may view the news of Apple’s latest consumer financial product — a high-yield savings account — as unlikely to be a game-changer. High-yield digital savings offers abound, and tend to come out of the woodwork in rising-rate environments.

Yet Apple being Apple, things are never that simple, or obvious. The Financial Brand dug behind the headlines to tease out key aspects of the rollout. Taken together, they present a compelling case that once again, the Big Tech is taking incremental steps to dominate what it views as a financial ecosystem.

The latest case in point is Apple’s October 2022 announcement that it was going to augment its Daily Cash rewards system for the Apple Card by setting up a high-yield Savings account that card holders could place Daily Cash into. The account would be offered through Goldman Sachs, Apple’s card partner. Beyond that, card holders will be able to deposit additional money into Savings from a linked bank account or from their Apple Cash card, a virtual card offered through Apple’s partner, Green Dot Bank. All of this will go through the Apple Wallet, which is also home to Apple Pay.

It’s a payments play, a banking play, and something else entirely.

“Apple’s motivation is not to become a bank, but to drive an ecosystem,” says Ron Shevlin, Chief Research Officer at Cornerstone Advisors. He applauds the timing of introducing “high-yield” savings at a point when rates have started to actually rise towards meaningful levels for savers, but, again, this is not traditional competition.

That word — “ecosystem” — comes up a lot in discussions about Apple’s financial activities.

“The savings account further cements the ecosystem,” says Jason Mikula, consultant and Publisher of Fintech Business Weekly. “Apple has a very long time horizon and this is one more checkbox in its progression.”

But Mikula scoffs at any thought that Apple wants to be a bank. There’s no viable path towards that in the U.S. and Rohit Chopra, Director at the Consumer Financial Protection Bureau, already has his eye on big techs in finance.

“The political environment isn’t conducive to it,” says Mikula, so instead Apple has concentrated on devising “synthetic banking,” applying its product design and marketing skills to banking functions. In time, analysts say, more functions may be brought inside Apple. Its long-delayed Apple Pay Later BNPL product, for example, is expected to be on Apple’s own balance sheet. 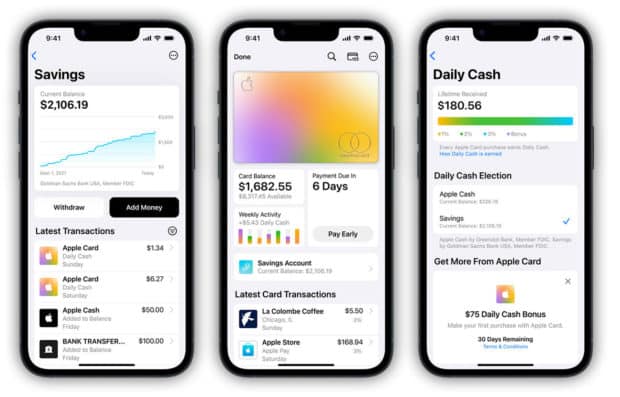 Right now, introducing savings into the mix that Apple is establishing could produce a “flywheel effect” of revenue, according to payments consultant Richard Crone. To have access to Apple high-yield savings, you have to have an Apple Card, which also means that you have to have an iPhone. Having the card means you may come to use it, especially given some of the reward levels Apple has offered, which feed back to Daily Cash and then back into Savings. Daily Cash can also go into the Apple Cash P2P product, adding another hook for the ecosystem.

“Apple Saving will one-up the value of cash rewards by paying interest on them.”

This will emphasize the value of the Apple Card specifically and cash rewards generally. No one pays “interest” on air miles, for example, and frequently they expire, making them a wasting asset. Rewards with interest is a new twist that should resonate, says Crone.

Think Out of the Bankerly Box

Crone also points out that there is potential for Apple Savings to become something more because of a pandemic-era regulatory change that became all but a footnote. The Federal Reserve removed Regulation D rules that limited the number of monthly transactions on such products as savings accounts and money market deposit accounts. This flexibility will serve Apple well, he says.

Shevlin says it is critical, when looking at Apple, to put aside bankerly concepts such as “accounts.” That’s not how a technology company like Apple considers the functions that banking delivers via accounts. He says it makes more sense to think of Apple giving its customers “capabilities.”

“They will be changing how people think about their savings,” Shevlin predicts. For this reason, he suggests that when Apple gets around to “checking,” it won’t necessarily even be an “account” per se. Instead, he predicts, it will introduce Apple’s take on how to move money.

Crone adds that traditional institutions must note that consumers will be opening three digital relationships — savings, a P2P and prepaid service, and a credit card — completely autonomously. Digital onboarding remains a challenge for many traditional players.

Another term related to “ecosystem” is “walled garden,” a contained world of products, features and functionality. Analysts say that understanding much of what Apple is really about hinges on understanding this concept, especially now that interest-bearing deposits are being added to Apple’s offerings.

“Savings is taking a natural step toward building out a broader version of the Apple ecosystem.”

Up until now, says Mikula, Apple hadn’t “cracked the code on how to bring deposits into its ecosystem.”

But why is that important? None of the analysts interviewed think it’s got anything to do with raising deposits, other than perhaps someday funding Apple Pay Later credit.

Stop thinking like a banker and think like Apple, analysts say. Apple doesn’t want deposits — as a corporation, it has gobs of cash of its own. Apple wants sales revenue.

The sales motivation goes beyond physical Apple products like computers, tablets and iPhones. Apple gets a fat slice of sales through the App Store. It sells music. It has Apple+ streaming. And much more.

Ownership of the platform gives Apple a huge revenue base, points out Mikula.

Johnson suspects there’s even more at stake. Apple has been building out its own advertising network. Bringing deposits into the Apple world through the new Savings product creates the potential for consumers funding sales through money they’ve brought into the Apple world.

Among other things this means that the sales Apple advertisers make can be more profitable because inside the Apple system deposit-based payments could be transmitted without going over card rails — and thus without the fees charged by card issuers.

There’s another perspective here. The more Apple can get people to stay within the Appleverse, the more inertia that generates. Banking institutions still benefit from this phenomenon — so many automated transactions go to and from a primary checking account that it’s too painful to contemplate moving to another provider. Apple would just be taking a page from banking’s book.

“The consumer gets locked in,” says Shevlin.

The potential outlined above is one thing, but analysts stress that a heavy dose of reality must also be taken when discussing Apple’s future in financial services.

Apple As A Target:

Analysts point out that Apple has had a mixed record as it has moved into financial services.

Shevlin says it has taken Apple Pay years to begin to get traction among consumers, for example.

The huge iPhone user base itself prompts a sort of “half empty, half full” debate.

“Any time Apple does something, you have to look at the numbers,” says Shevlin. It’s estimated that there are 510 million active iPhone users globally. While that’s half of the smart phone market, by definition financial products that require iPhone ownership, shut out the other half of the potential base — Android users. And given the size of even the iPhone base, Shevlin says his research has found that Apple Card’s penetration is not what it could be.

On the other hand, 510 million users ain’t nothing. Johnson says that with numbers like that, Apple can exert the lightest of light touches and still produce results out of its growing ecosystem.

Crone sees Apple’s growing collection of financial products encroaching not only on banking but on other financial providers’ turf and adding to the appeal.

Among other analysts there is skepticism. It’s one thing to have a menu, another to sell every dish on it. Mikula says he talks to friends about the services they use and no one ever talks about sending P2P transactions via Apple Cash. It’s not a scientific sample, he says, but it makes him wonder.

Johnson says the use of high-yield savings to encourage people to leave money in the Apple ecosystem is “Try #3.” Apple has deep pockets that fund deep patience, something that many other organizations lack.

How Worried Should Banks and Credit Unions Be?

Crone sees Apple’s financial services becoming the modern equivalent of the old Merrill Lynch Cash Management Account, introduced in the late 1970s and considered revolutionary at the time. It blended securities, a sweep into a money market fund, a credit card and more into one account. In its early years, the CMA was a major competitive factor for banking. To analysts who point out flaws in the Savings feature — such as a no direct deposit feature at present — Crone responds that it’s early days and that Savings 2.0 and more won’t be long in coming.

How worried should banks and credit unions be about Apple right now?

Crone calls it a “slow, steady juggernaut.” This latest product addition is a wakeup call to banks that won’t sign onto Apple Pay because of the big tech’s fees.