Subscribe Now Get The Financial Brand's FREE Email Newsletter
The expanding underbanked market represents 20 percent of all U.S. households that should not be ignored. Reaching this market presents challenges and opportunities and will require a rethinking of products, distribution channels and communication strategies.

The financial crisis of 2008 and the emergence of Gen Y has created a massive generation of digital consumers that have higher debt, lower incomes, less trust of traditional financial institutions and a view of banking that differs greatly from their predecessors. These consumers are looking for ‘banking’ products that provide value, convenience and functionality that can, at times, be offered by non-traditional providers.

Given the sheer size of this segment of consumers, they are hard to ignore. The challenge is how to serve a market that is highly diverse, of lower immediate value and needs to be reached using new offers and media. To date, non-traditional financial services providers have done the best job in serving this market.

The primary reason is because of these players have been better at innovating, have a lower overhead structure, are less regulated, and do not need to deal with legacy operating systems. Alternatively, traditional financial organizations have better brand recognition and a more expansive distribution network (in most cases).

According to a new report from Acxiom entitled, “The Underbanked Market: A New Frontier for Retail Bank Growth”, the underbanked is a large and growing segment. As a group, they are consumers with a checking and/or savings account at bank or credit union but with less than average use/access to other basic banking products such as credit cards, loans and other traditional services.

Underbanked consumers conduct some of their financial transactions outside of the mainstream banking system — defined as retail banks, savings and loans and credit unions. The FDIC defines them as those who have used alternative financial services (AFS) in the past 12 months. 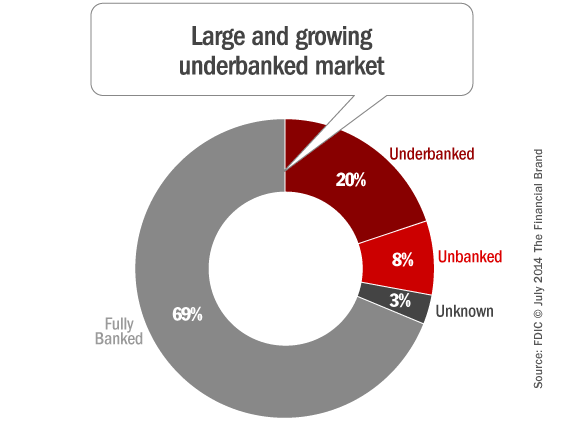 While the underbanked segment possesses some of the demographic characteristics that would be expected (lower net worth, a higher percentage of renters and lower home values), Acxiom provides an underbanked profile with a few surprises:

The challenge for traditional financial institutions is how to adequately and economically serve a highly diverse segment that has limited financial needs in the short term. The opportunity is that many in this segment currently pay high fees for basic banking services, a great deal of the non-traditional competition for these consumers are limited in their offerings and there is no guarantee that the underbanked will remain this way.

The Correlation of Underbanked and Gen Y

While many in the Gen Y segment are already fully-banked, Acxiom’s Underbanked Index (UBI) shows a significantly greater proportion of Gen Y in the underbanked segment. At the same time, Acxiom also shows a significantly higher representation of Gen Y in the consumption of savings and checking accounts as well as alternative products such as internet tax preparation, money wiring and cash advance services.

The question is whether the higher percentage unbanked representation is simply a function of this segment being earlier in their financial lifecycle or if their financial patterns will remain different than their predecessors. Either way, it is clear that many in their segment already shop differently, communicate differently, are more comfortable than other segments using mobile devices.

Due to the size of this market, traditional financial services providers need to pay attention.

The challenge is that many younger customers that would normally choose a traditional checking account as the foundation of their banking relationship are increasingly choosing to use a prepaid debit card. In most cases, it is because this segment doesn’t see the added value of a traditional checking account versus a prepaid card that can accept ‘deposits,’ do transactions and pay bills. This segment doesn’t view checks as being important, yet they value the ability to get real-time balances and not overdraw their account.

Because the demographics of the underbanked consumer include both younger and older consumers, finding the right media mix to reach these households is not cut and dry. While some of the older segments use digital channels, this is not the norm. On the other hand, the Gen Y segment prefers digital channels for much of their communication. The key is to find a cost effective media mix that can reach the underbanked segment that may generate lower revenues initially.

The good news is that the lower cost digital and mobile channels are highly effective at reaching the important Gen X and Gen Y households according to Acxiom. 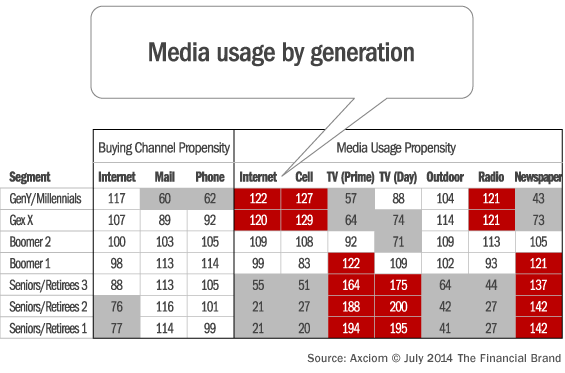 Underbanked consumers need minute-to-minute information about their finances, and mobile financial services are well suited to deliver it. Although these consumers often have insufficient access to financial services, their access to mobile phones is fairly widespread. This disparity suggests a large opportunity exists for financial providers to effectively serve the underbanked population using the mobile channel.

The Center for Financial Services Innovation (CFSI) outlined four attributes to mobile that make it highly appealing and viable in serving this market:

While smartphones offer much deeper functionality than feature phones, evidence suggests that underbanked consumers are not far behind the general population in smartphone use. With pricing for both smartphones and data plans dropping, and with smartphones becoming increasingly available through prepaid wireless providers (who typically cater to a lower-income customer base than post-pay carriers), the underbanked have ever greater access to highly functional smartphones that could be the low-cost link between traditional financial providers and the underbanked.

For any financial organization looking for growth beyond organic growth or acquiring other organizations, the Gen Y segment, and more specifically, the underbanked market is a viable option. The need to effectively and efficiently reach this market becomes even more important as Baby Boomers retire and the competition from both traditional and non-traditional financial providers intensifies. Some noticeable forays into serving the underbanked consumer include:

First of all, according to Aite Senior Analyst, Ron Shevlin in one of his many posts on the subject, the financial services industry may want to stop using the term ‘underbanked.’ According to Shevlin, “The misuse and misconceptions surrounding the use of the term underbanked isn’t doing the industry any good. The problem is that the term underbanked has some stigma attached to it, conjuring the image of someone pushing a stolen grocery shopping cart with all their earthly possessions around town. And that the growing number of them is some kind of epidemic plaguing the nation.”

Whatever they are called going forward, the large and growing underbanked market, and especially the segment of Gen Y consumers within this segment represent a unique opportunity and challenge. The key will be how to reach and serve this diverse market efficiently. According to a report by KPMG entitled, Serving the Underserved Market, the needs of the underserved market include meeting immediate cash-flow requirements, establishing a mainstream financial footprint, developing better saving and investing habits, and better managing personal finances. Organizations that can successfully meet these needs have the opportunity to cultivate loyalty among underserved consumers and grow their services as their customers become financially stable.

But, non-traditional players also are a threat due to their agility, lack of legacy infrastructure and ability to create offerings that can be distributed through massive non-bank channels. Companies that recognize that consumer needs are changing, that are quick to develop digital and mobile offerings for this market, and who understand that ‘banking’ means different things to different people will be the ultimate winners.