Despite impressive mobile banking awareness and usage numbers at most banks and credit unions, engagement beyond routine transactions is hampered by usability issues and security concerns.

Banks and credit unions continue to improve mobile banking penetration, with 63 percent of smartphone users having interacted with their institution via a mobile app, according to an online survey conducted by Andrews Research Associates on behalf of the Deloitte Center for Financial Services entitled, ‘Mobile Financial Services: Raising The Bar on Customer Engagement.’ As for value, 39 percent of those surveyed characterized the ability to deal with their bank on a mobile device as extremely or very important.

“Companies still have work to do to achieve full utilization of even routine capabilities.”

Despite this success, challenges remain, such as how to increase the number of mobile interactions with consumers as well as how to initiate and maintain deeper engagement via mobile devices by offering more sophisticated capabilities.

This is because the vast majority of mobile interactions have not progressed beyond the most routine banking behaviors, despite significant marketing of the ‘second stage’ of mobile banking that includes bill payment,  mobile deposits and P2P transfers. 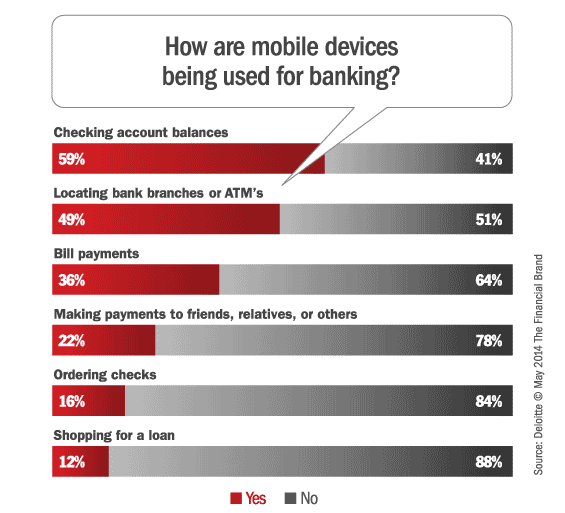 As mentioned in the Financial Brand article, we have become a world of multi-screeners, with 90 percent of a consumers’ media interactions (4.4 hours a day) done on a computer, smartphone, tablet or TV. The device selected is often driven by context – where we are, what we are doing, what we want to accomplish and the amount of time we have available. Smartphones not only command the highest percentage of user interactions (38 percent), but also serve as the most common starting point for activities across multiple screens.

Yet, for many consumers surveyed by Deloitte, despite greater usage of smartphones and tablets, adoption of mobile banking could still be a problem for many financial services companies due to usability issues and concerns about privacy and security.

For instance, one in four survey respondents said that the difficulty of seeing and typing on a small smartphone screen was a significant limitation that discouraged them from using their mobile device more often. Such factors — which were much less of a concern for those using tablets — were also cited, particularly by older consumers, as by far the two most significant barriers to using smartphones to conduct their financial services business. These usability issues become more difficult to manage as the number of devices being supported expands exponentially. 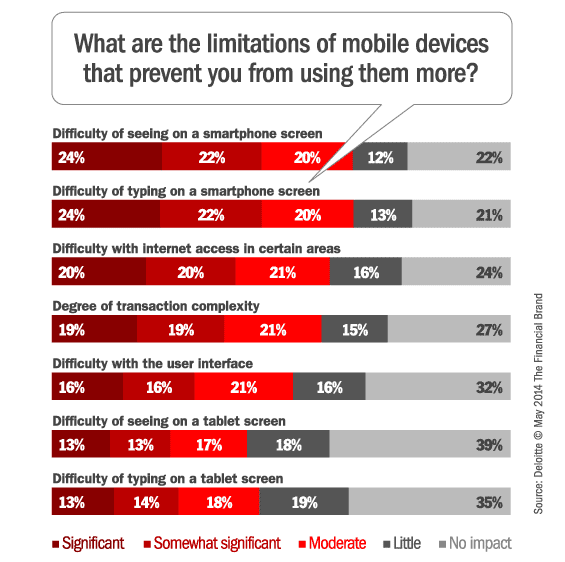 Beyond usability, Deloitte says 61 percent of smartphone owners who don’t use mobile banking cite “security” issues as the primary reason. This is 22 points higher than the percentage citing the next most common reason (a preference for doing such business in person or with a human being over the phone). In addition, many consumers who do use mobile banking limit their engagement to ‘routine transactions’ for this reason.

According to the research, 36 percent of consumers just don’t trust Wi-Fi security, with 28 percent being worried that their mobile device will be lost or stolen along with their personal financial information. One in five respondents believed that the risk of identity theft was greater with mobile transactions. 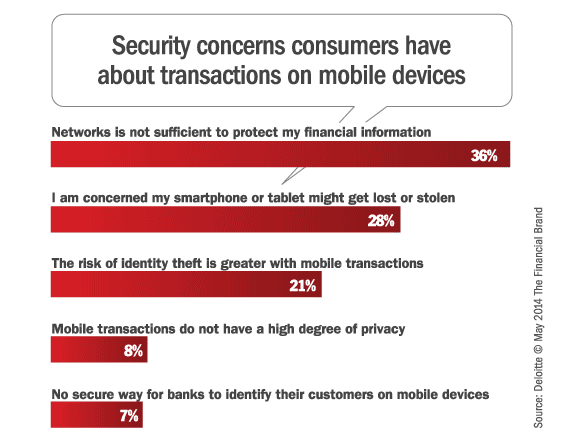 When asked what tangible steps could be taken to reassure concerned members and customers, 80 percent of those surveyed would like a more secure network and the ability to remotely disable a lost or stolen device. 72 percent of respondents would welcome the use of biometric identification, such as fingerprints or eye scans, to enable a mobile device, such as a tablet or smartphone, for financial transactions.

In addition, over half of the respondents liked the idea of pre-clearing a limited number of people who could receive funds in a mobile payment, as well as setting a dollar limit on such transactions. Two-thirds supported leveraging the mobile device’s GPS for real-time, location-based fraud sensing.

“The biggest area of opportunity seems to be in the security area, rather than a certain mobile app or a new shiny feature,” said Jim Eckenrode, executive director of the Deloitte Center for Financial Services. “To boost adoption and set the stage for more ambitious applications, companies will likely have to take tangible steps to reassure consumers about the security of their mobile financial transactions.” 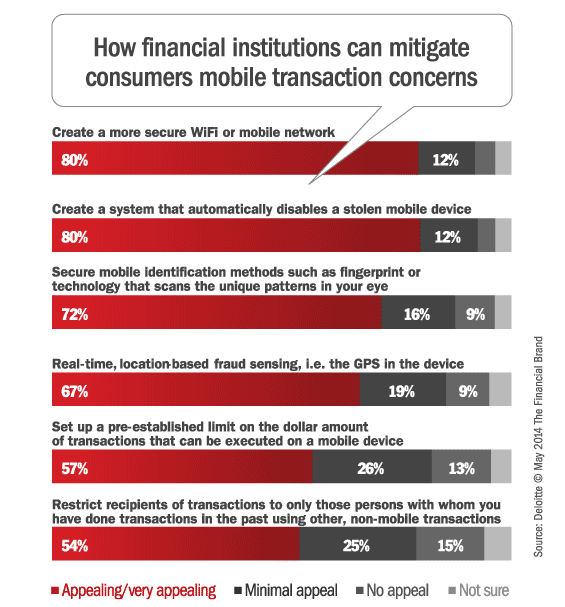 Analysts at Deloitte who authored the report concluded: “Implementing such concrete security measures, then calling attention to such efforts in advertising and social media campaigns designed specifically to address such concerns, could perhaps help overcome lingering consumer hesitations about accessing personal financial information or transacting financial business over smartphones and tablets.”

As new smartphones, tablets and even wearable technology and features are introduced, there are new opportunities for banks and credit unions. We are already witnessing the innovations that can be introduced around the high revolution cameras, voice commands and fingerprint scanners built into today’s phones. It’s clear financial institutions have only begun to scratch the surface of what can evolve.

“Planning should consider how advanced mobile capabilities can overcome some of the usability and security concerns.”

“In the not-too-distant future, new technologies will likely be added to the mobile platform that take advantage of its ability to know where it is, see what is around it, communicate with other local devices and connect with information sources that have yet to be deployed,” says Robert Berini, a technology director at Deloitte. “Ultimately, it may require companies – and all of us along with them – to re-imagine what mobility means.”

Deloitte analysts conclude that: “Financial services companies should look for ways to use the increasing ubiquity of mobile technologies to cultivate deeper customer engagement and boost brand loyalty.”

The survey of 2,193 respondents was conducted by Andrews Research Associates on behalf of the Deloitte Center for Financial Services in January. Survey respondents were required to own a smartphone, be at least 21 years of age, have a minimum annual household income of $25,000, and have a bank checking account. The online survey was also weighted to represent the broader U.S. smartphone population. More on the survey’s methodology can be found in the full report.