Titi Cole brings deep operations and customer service experience to her role in Citi's worldwide consumer banking organization. Her experience as a Black woman in corporate America guides her in the additional role of diversity and inclusion chief.

In her nearly 30-year career as a banker and consultant, Titi Cole has worked in consumer financial services in four continents: Africa, Asia, Australia and North America. One of the many things she’s learned in her financial journey is that in spite of national differences, consumers the world over all want the same three things from their financial institutions.

The first, she says, is convenience. This includes not only geographic convenience but also ease of use of services and simplicity.

The second is relevance. “Show me you know me,” says Cole, “so that, based on what you know about me, you can bring me relevant solutions to help meet my financial needs.”

Finally, people want their providers to keep their money safe, as well as safeguard their personal financial information.

Cole moved into her Citi post in August 2020, coming there from nearly five years at Wells Fargo, chiefly as Head of Operations. Before that she worked in senior retail banking positions at Bank of America and BMO Harris Bank.

Cole’s first banking job was in Lagos, Nigeria, where she had graduated with her undergraduate economics degree. She returned to the U.S. — she was born in New York City — and obtained an MBA from Kellogg School of Management. The degree led to a nearly six-year stint as a McKinsey & Co. consultant, chiefly working with banks.

Today Cole is Head of Operations and Fraud Prevention and the Chief Client Officer for Citi’s Global Consumer Bank. The organization serves over 100 million customers in 19 markets. As Chief Client Officer, she oversees the customer experience provided by approximately 50,000 employees worldwide who have customer contact in person and via contact centers.

Job #1 for Cole every day, in that role, is making sure that everyone “is putting the client at the center of everything we do. For me, the job is advocating for the client and connecting the capabilities available across the company. We’ve got regional teams that have client experience functions that matrix into me. My job is to make sure that in every dialog we are bringing the voice of the customer front and center.”

Spend five minutes talking banking with Cole and you realize that she is passionate about her work. Behind that passion lies putting herself in consumers’ shoes.

“I am the client,” she explains. “I tell people that I love consumer banking because it’s not that hard to figure out what actually needs to be done. You just have to ask yourself, ‘If this was my account, what would I want?’ Somehow, as an industry, I think we’ve lost that client perspective in some ways. But if you can answer that question, you’re good.”

At Citi, Cole says, she has emphasized that everyone in the consumer bank ultimately serves the consumer..

Some back office staffers can be more focused “on efficiency and how they can do Six Sigma,” she says. “That’s important. However, excellent client experience means connecting the firm end to end and getting every single person to understand how the work they do impacts the experience.” 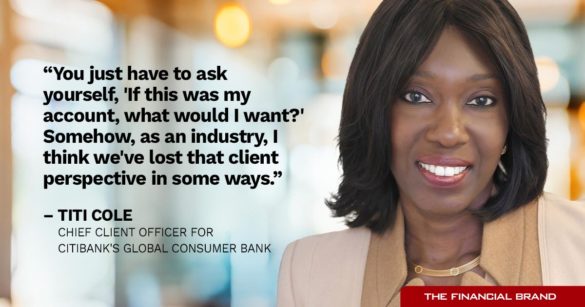 A lesson of COVID-19 for Cole was that banking is an essential industry, like first responders and hospital workers. Keeping offices open where possible in the early days, keeping ATMs operational and stocked with cash, making stimulus funding available, all underscored banking’s critical economic role.

“Without those efforts, the economy would have come to a halt around the world,” says Cole. Increased use of digital channels and efforts such as Citi’s partnership with Google Plex play to the tech side of the bank, but Cole says it is critical to remember that there are people behind every account.

Recognizing that the industry has multiple pain points that need addressing, Cole says she realizes that it is often in the “last-mile” that financial institutions falter. A key one arises in digital banking channels.

“We have to continue to make sure that regardless of the channel that the consumer starts in, that they can complete the transaction, and that that doesn’t mean starting over again if they need help and go to another channel,” says Cole. “It’s an industry pain point when people start in digital and get pushed out and have to call a number and begin again.”

Cole says Citi has been working on capabilities to give people help while they are in a given channel, instead of bouncing them out.

“And if you still need to pop out of channel,” she adds, “there will be authentication and protocols to allow you to continue where you left off.”

“That’s a big part of our digital agenda,” Cole continues. But beyond that is making better use of the mountains of consumer data the bank has amassed over time. The goal is to build a relationship-level view of consumers so the company can offer relevant solutions.

Helping To Build Careers For Other Women And Minorities At Citi

Cole was brought aboard by Anand Selva, CEO of the global consumer bank, and Jane Fraser, Citigroup CEO.

The leaders had asked Cole to take on an additional role, to be the Global Diversity & Inclusion Champion for the Global Consumer Bank. The post includes working towards increased participation at Citi by women and underrepresented groups.

“I joined the bank to be part of a leadership team that I thought was on a really good path,” says Cole. “And with Jane’s leadership Citi is on a great path towards progress.”

Jane Fraser’s appointment as CEO was a huge advance for women in banking, but Cole says there’s more to do at Citi and in the industry.

Cole says the purpose of the additional appointment was not to set up a new organization, repetitive of human resources and other functions that already were addressing equal opportunity and related requirements.

Instead, “the idea is to be a leader at the table who is challenging, pushing, helping remove some of the roadblocks,” Cole explains. “I partner with HR teams that have more formal roles. My work is to talk to my peers to say, ‘Here’s where we’re making progress and here’s what we need to do more of’.”

Cole sees diversity revolving around factors that can be counted, i.e., there are so many people in management from this group or that group, representation of women is up here, and so forth. As a numbers-oriented industry, Cole notes, there is a good deal of counting.

In the U.S., the participation of women has seen “really good progress, but we have a way to go,” says Cole.

.
“Jane Fraser is the first woman CEO of a major bank,” says Cole. “It’s a big step, but late. And as she has said, she’s the first, but she won’t be the last, because the talent is there.”

The representation of women on Citigroup’s board is now on par with men, Cole notes. “But we’ve got work to do on women being in leadership positions,” she adds.

Cole notes that Fraser has spoken openly about understanding what it is like being a working mother in corporate America.

“She brings a level of empathy,” says Cole, “and for all the younger women who are trying to figure out how they can make it happen, it helps to have a role model at the most senior level who has actually done it. Representation matters.”

“Now, when you talk about people of color, especially underrepresented minorities, we have even more work to do,” says Cole. “I’m not just talking about blacks, I’m also talking about Hispanics and other groups.” She points out that Citi has committed to goals for having more women and minorities in leadership roles by the end of 2021.

Regarding her work in support of inclusion, Cole says that where diversity is a matter of quantifiable records, inclusion is more qualitative.

“Diversity is about different viewpoints, styles and backgrounds,” says Cole. “But if those can’t be brought into the workplace, then what’s the point? Inclusion unlocks the power of diversity and it is a little bit harder to measure because you are not really counting it, though you can see what’s happening with retention, engagement levels, and the sense of belonging in an organization.”