Social media experts have been known to say some pretty ridiculous things. Take for instance celebrity keynote speaker Gary Vaynerchuk, who likes mocking those who ask him about the ROI of social media by offering up this illogical reply: “What’s the ROI of your mother?”

What does that even mean?

Pay Gary his $50,000 speaker’s fee and he’ll answer that question for you. He’ll explain that there are some things — like love and mothers — with a value that can’t be quantified. Too bad his analogy breaks down the instant you try applying it in a business context. While there may be things in people’s personal lives that don’t have a price tag, everything — and that means everything — in the business world has a quantifiable value, even the “intangibles.”

Among the many other nonsensical recommendations social media consultants have repeated (over, and over, and over) is that “social media should not be used to sell your products and services.”

To an ROI-focused CEO, this sounds like a joke. But the problem is, no one in the C-suite is laughing, CFOs least of all. They wonder why the organization would engage in any activity that has no measureable impact on the bottom line.

Reality Check: If you don’t weave product promotions into your social media activities, of course you are going to struggle establishing any kind of ROI.

Navy Federal Credit Union is one financial institution that has dismissed the anti-sales strategy proffered by social media pundits: “You can’t sell stuff in social channels?” Navy FCU says phooey to that.

It started off with a social component — nothing earth shattering, just a fairly typical contest where members were invited to submit videos explaining why they loved Navy FCU. Over 300 video entries were submitted, with six members winning $4,000 CDs, six winning $1,000 CDs, and ten getting $100 gift cards.

Notice that instead of giving away hard cash, Navy FCU gave away CDs. That’s smart, because (1) they are making consumers aware that the credit union offers certificates of deposit, and (2) they are maximizing the time-value of money by locking up cash giveaways as term deposits.

Most financial institutions would be happy with that one modest idea (deferred cash prizes) and stop there… a video contest with a giveaway and nothing more. While delaying distribution of cash awards is something CFOs will surely appreciate, a straight video contest without any product offers is something CFOs will account for as pure cost — no income minus expenses equals a net loss. “So tell me why we did this again?” they will ask.

Read More: How To Gain (And Lose) a Ton of Facebook Fans Fast

Rather than accept the “no sales” theory pitched by social media gurus, Navy FCU decided to go one step further and do the unthinkable: They would actually try selling banking products on Facebook — gasp!

They strategically placed a few posts on their Facebook page and paid for Facebook ads to promote two specific products: auto loan refinancing and certificates of deposit.

The results? Brace yourself…

Keep in mind that these results are on top of the standard metrics used to measure social media success. There were over 45,000 votes in the video contest, and the credit union saw the number of its fans on its Facebook page increase five fold. Add in the tens of thousands of video views generated on YouTube when members posted their stories there. 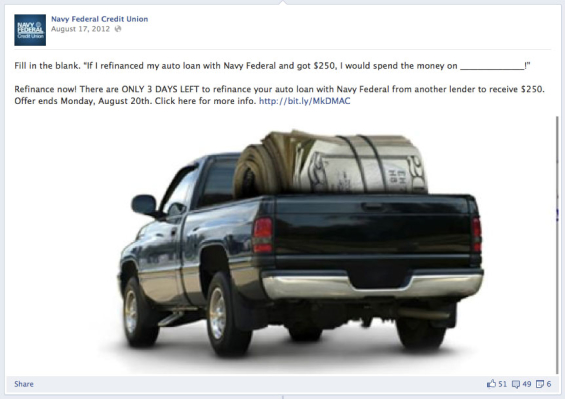 This Facebook post from Navy FCU says, ” Fill in the blank. ‘If I refinanced my auto loan with Navy Federal and got $250, I would spend the money on _____!’ Refinance now! There are ONLY 3 DAYS LEFT to refinance your auto loan with Navy Federal from another lender to receive $250. Offer ends Monday, August 20th. Click here for more info. http://bit.ly/MkDMAC.” You’ll notice they are using a Bit.ly link to track inbound clicks from Facebook.

Navy FCU currently has 829,000 ‘Likes’ on Facebook. Back in April 2013, they had 520,621. That’s over 300,000 new fans in less than six months. All this activity has helped propel Navy FCU to the top of nearly every Power 100 list The Financial Brand maintains. They must be doing something right. Facebook (the company) apparently agrees. They published a glowing case study on their corporate website about the “4 Million Members, 4 Million Stories” campaign, touting the kind of results and bottom-line data that would wipe the Facebook frown off any CFO’s face.

Read More: Facebook Engagement – How The Top 5 Brands in Banking Get It Done

Success With Sales In Social Channels Is Neither Free Nor Easy

Navy FCU’s member appreciation event isn’t the only time the $54 billion credit union has used Facebook ads to sell its services. Earlier this year, they ran a campaign for their mobile app. Rather than blanket Facebook with ads using a crude demographic model, Navy FCU targeted its campaign with pinpoint precision. The ads were only shown to members who were: (1) fans of their Facebook page, (2) used online banking but not mobile banking, and (3) accessed Facebook from a mobile device. Simply brilliant. Navy FCU saw the number of downloads for its mobile app triple during the campaign.

Even though Navy FCU takes a sophisticated, sales-oriented approach to social media, they are still mindful of the norms and user expectations in each channel.

“We realize we are invited into fans’ personal space,” says Jennifer Sadler, Manager, Social Media Strategy/Marketing Communications at Navy FCU, about the credit union’s involvement in online communities. “We have to be cautious about how we handle sales so we don’t get uninvited.”

When Navy FCU wants to promote a product like mobile banking on Twitter, they can carefully craft a tactful tweet — something that allows them to talk about the product without turning it into an unsavory ad. For example, they might talk about how they are going to have a tweet-up with their in-house mobile banking expert for the next hour, so anyone with any questions can hit them up.

If Navy FCU wants to push the throttle on sales in social spaces a little harder, that’s when they start buying promoted tweets. If they want to grow followers, they pay for a promoted account.

For all of Navy FCU’s success in social media, it doesn’t come without a price. Out of 80 or so marketing employees on Navy FCU’s staff, eight are in the social media department. The credit union employs another 20 in their contact center who act as social media service reps. Navy FCU publishes a service-level agreement for Facebook users that promises any inquiry will receive a response within an hour, but normally it only takes 15 minutes, Navy FCU says, and 95% of all issues are resolved within Facebook.

The credit union also pays for its enterprise-grade social media management solution from Sprinklr. The Sprinklr system allows Navy FCU to monitor conversations about their brand occurring anywhere online. It also serves as the organization’s interface with social networks, allowing Navy FCU’s service team to log all interactions. This makes it easy for compliance people to audit the communications trail, should any disputes (or regulators) present themselves. Whenever the marketing department creates content for a social network, it travels through Sprinklr over to compliance and legal for a thumbs up before it gets posted.

“If I had any advice for financial marketers involved in social media,” Sadler advises, “it would be to make friends with compliance. You need a really strong relationship with your compliance team in order to make social media work.”

Navy FCU also ponies up money for an advanced social media metrics system. This allows them track online traffic inbound to their website. Which channels generate the most pageviews? How many pages on the website do visitors from social networks look at? Which ones? How often do they come back? How often do they click the “Open Account” and “Apply Now” buttons on the site? Navy FCU’s high-tech online tracking system gives them the ability to answer all these questions. The marketing team takes the results and packages them neatly into an executive summary. If any manager at Navy FCU wants to know about social media ROI, all they need to do is check their email inbox.