Subscribe Now Get The Financial Brand's FREE Email Newsletter
Messaging on social media has to touch people's economic situation to be relevant. There's room for product promotion too, says a marketing veteran, but bank marketers must start from a position of trust and usefulness.

Financial institutions that want to do a better job with social media marketing might be tempted to emulate some of the largest banks, or other major brands like Nike, Apple or Tesla. But Chris Curtin, whose duties at Bank of America include heading up social media, thinks a great place to learn from are the branding efforts of colleges and universities.

Many collegiate brands are masters of branding, he says. “They have each created an identity that people apply to be part of,” says Curtin. “They apply the brand to themselves while they are there and then they carry that brand with them for the next 40 years or so.”

“Collegiate branding permeates culture, it permeates merchandise and even employees and students, says Curtin. He suggests that companies could turn their branding into something that employees might carry with them even after leaving, creating a sort of “alumni base” of former staff that becomes an extension of the current community.

Curtin’s choice comes after extensive experience in branding and social at several blue-chip companies. He arrived at BofA in April 2022 as SVP and Head of Digital, Social and Rewards after a seven-year stint at Visa, ultimately as its chief brand and innovation marketing officer. Before that he served in marketing and innovation posts for Hewlett-Packard and The Walt Disney Company.

Yet Curtin’s involvement at Disney didn’t begin in marketing or innovation at all, but with a five-year job in government relations. Curtin has a law degree from Georgetown — law was a family business — but he suggests that marketing is not that far away from the law, in a broad sense.

“With hindsight being 20/20, careers make sense looking backwards, and rarely make sense looking forward,” says Curtin. “But there’s a lot about the law and marketing where skill sets overlap. One such overlap is advocacy. Another is the ability to find a way to articulate arguments in favor of a vantage point.”

Tapping the Power of Social Media for Customers’ Good

Social media platforms aren’t courtrooms, but Curtin says there’s considerable power in them that can be used in multiple ways.

“There’s a lot of good that can come from social platforms and channels, and there are also risks and concerns,” says Curtin. “Social channels can unite the world and advance the world, but they can also be abused.”

At its best, social media is a marketplace of ideas, according to Curtin, and financial marketers need to think of this ahead of the goal to push product.

“You have to think about the ‘social’ part long before you get to the word ‘media.’ There should be a sharing of ideas, thoughts, perceptions and beliefs, where people can sift out the best insights.”

This comes down to creating content, large and small, that provokes thinking, and Curtin says he encourages his social team to work towards content that is responsive to what is on people’s minds. This entails observation and listening before sending messages — and not getting sucked into every bit of noise trending on social channels.

Right now, consumers and businesses are still acclimating to a severe change in circumstances, with inflation, higher rates and the potential for a recession in mind. 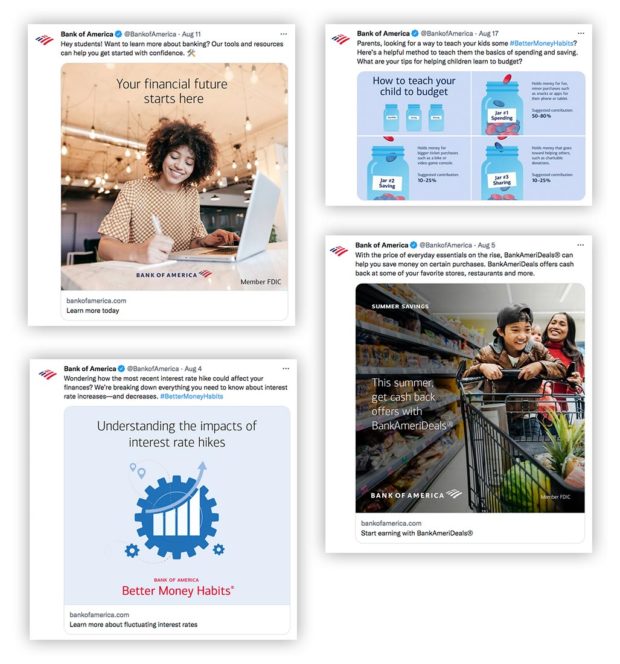 “People are looking to trusted sources to provide guidance and thought leadership, not just products and solutions,” says Curtin. “They want thought leadership regarding where we are today, where we could be tomorrow, and what the best path forward is.”

Because of this, while BofA does promote products through social, a common thread on the platforms it uses has been educational. The stress is on practical perspectives on how to make it through tougher times.

Some financial institutions treat social media as a set of interchangeable pipes, all of which carry social media “water.”

That’s a mistake, according to Curtin. “I don’t believe each platform and channel is just another street to drive down. The best brands approach them for what they are and use what they offer to best advantage.”

Underscoring this, Curtin adds: “One of the reasons the big brands have built audiences of the size they have is because they are not facsimiles of their competitors. It would be narrow-sighted for a brand to sit back and say, ‘This content works in radio, therefore it works on social. Or that what works on Pinterest is going to work as well on Twitter.”

An example of applying this approach is an effort BofA has on social that uses the occasion of a wedding — the same wedding — very differently depending on the social platform.

On YouTube, below, the viewer zooms in on a couple dancing at the wedding. The woman speaks to the audience and points out all the people around the room who are using a moment here and there during the reception to check something on their BofA mobile banking app.

At the end of the spot, her partner asks, “Who are you talking to?” Nobody, she replies. 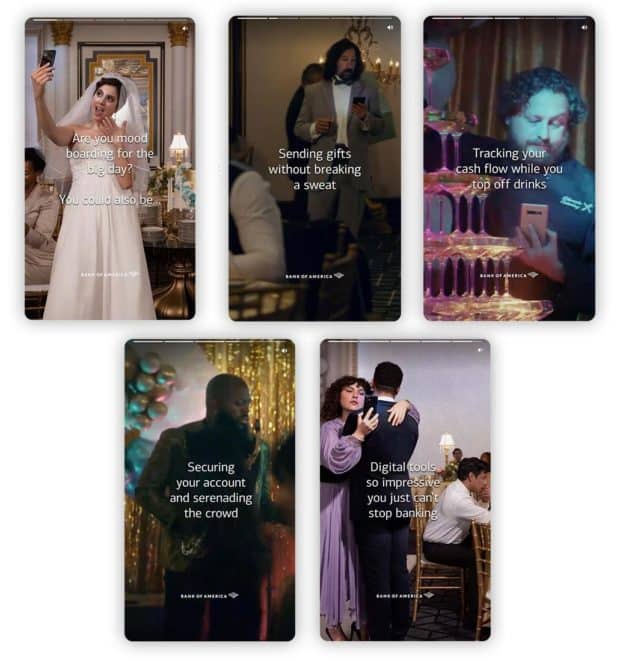 In a Pinterest treatment of the same wedding, above, five different characters — the bride, a cousin who forgot to bring a present, a waiter pouring champagne into tiers of goblets, a saxophonist whose credit card has been compromised, and a woman checking her balance while dancing — all use the app.

On Instagram, a woman offers her commentary in slices tailored to this platform’s style.

Read More: YouTube: Best Practices for the Most Ignored Social Channel in Banking

Marketers can speak so much in terms of “eyeballs” that it’s possible to forget that there are people attached to them. Curtin thinks a financial brand that has amassed millions of followers has established an obligation to them that demands what he calls “white-glove service.”

He adds that followers are an asset that should be treated as such.

“That’s a community you should be looking to first. You should be thinking that before you speak to anyone else, you want to make sure that those people, along with your customers, hear from your directly.”