The popularity of buy now, pay later programs with shoppers has caught the eye of regulators. The Consumer Financial Protection Bureau has raised concerns about the plans and in December 2021 issued a call for data from five of the leading BNPL providers to support a probe. The pending inquiry of Affirm, Afterpay, Klarna, PayPal and Zip has produced a trove of valuable product guidance for banks that want to set up their own BNPL programs.

That source is a fat file of responses to CFPB’s call for public input about BNPL programs. Among the comment letters filed by the late March 2022 deadline are responses from consumer groups, state attorneys general and even from consumer advocates from Australia, where BNPL is very popular.

Taken together, they serve as a good guide to what consumers don’t like or find confusing about BNPL plans and how they are marketed. The comments also carry clear clues to what future BNPL regulation could look like. CFPB Director Rohit Chopra has major concerns about buy now, pay later debt, so the chances of rules being imposed are strong.

As one example of what’s in the file, Consumer Reports notes in its BNPL comment letter how the concept has been expanding to cover more categories of goods and services and not always with the common “pay in four” plans that bear no interest charge.

“Using BNPL loans for groceries or gas purchases raises concerns about potential risks relating to the financing of regularly recurring household expenses. While BNPL might help borrowers to navigate an occasional shortfall or unexpected expense, overuse could expose them to debt and delinquency.”

One of the most powerful comment letters came from consumer advocate groups in Australia, where BNPL got an earlier start than it did in the U.S. In fact, the BNPL company Afterpay that Block (formerly Square) acquired in early 2022 started in Australia.

The letter, from Consumer Action Law Center and Financial Counselling Australia, has an underlying tone of “don’t let things go this way in America.”

Specifically, the letter states: “To date, the Australian government has taken a hands-off approach to the [BNPL] industry, and has left the industry to regulate itself. The key consumer protections that apply to other forms of credit in Australia do not apply to BNPL.”

“Given that BNPL sits outside of the regulatory framework in both of our countries and the similar growth in usage, it is likely that the experience of U.S. consumers will be much the same as that of Australian consumers,” the letter states. The document cited government research that found that 21% of Australian BNPL uses had missed a payment and that one out of five BNPL borrowers had reduced or gone without essentials like meals in order to make BNPL payments on time. In addition, 15% of BNPL users had to borrow to make timely BNPL payments.

The findings in the infographic below come from a survey among Australian financial counselors. 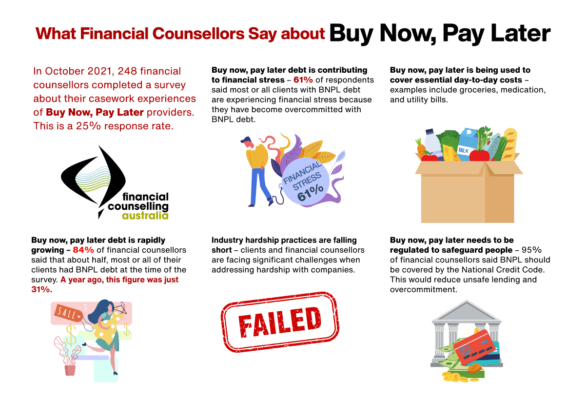 “Buy now, pay later” is very popular in Australia, where it arrived earlier than in the U.S. In an unusual move, two consumer advocacy groups filed warnings about BNPL with the Consumer Financial Protection Bureau.

Overall, the study depicts a form of credit that is resulting in considerable stress. Note that this study was among consumers who are consulting with the counselors and not Australian adults at large.

A telling anecdote about BNPL: The fact that a consumer is not running late on BNPL payments doesn’t mean everything is OK with their life financially.

The Australian groups’ comment letter provides a case study taken from a counselor’s files. “Donna,” an Australian single mother with only part-time work and three kids, sought debt counseling after running into trouble handling utility bills, a car loan, credit cards, insurance and multiple buy now, pay later debts. Donna wound up borrowing to pay down credit card debt and BNPL debt. Initially this helped restore some balance, but then she needed to use BNPL to buy groceries.

“She likely had high BNPL credit limits because she had consistently made her repayments,” the comment letter says, “which disguised her financial hardship.”

During a recent media backgrounder held by the Financial Technology Association (FTA), which represents some BNPL firms, several provider representatives indicated that most payments toward their plans come from debit cards. Their suggestion was that rumors that Americans are paying off BNPL debt with fresh debt are not accurate.

The issues brought up by consumer representatives and others fall into two broad categories: how BNPL offerings are marketed and how the credit is administered.

Let’s look at communications first. Some questions to ask, based on the comments filed:

• Is the type of plan and its interest rate, if any, clear? For many people the “pay in four” plans, with interest subsidized by merchants, represents BNPL. But that is not the only kind of plan offered. Commenters also noted that offerings have been evolving, but communications aren’t always explicit in describing new variations.

• Are billing cycles adequately explained? Pay-in-four plans begin when the purchase is made and run over six weeks, meaning that they don’t synch with the typical monthly billing most mainstream consumer credit uses. The Woodstock Institute says that this “may be unfamiliar, confusing and surprising to consumers who are accustomed to budgeting for monthly bills.”

• Can basics about the BNPL offerings be easily found when shopping or within the lender’s app? The emphasis in BNPL credit typically is on speedy, frictionless transactions. Consumers may bypass disclosures and details that are not explicit. Consumer Reports points out that there is no standardization in the presentation of details. That’s one of the first things a regulation would likely tackle.

• Is it clear that the credit is coming from a third-party company? This one is a little trickier for banks venturing into buy now, pay later because some early banking efforts have been structured to be akin to store cards, where the actual lender is not highlighted.

• Is it clear that the consumer is entering a credit relationship? Observes a group of state attorneys general in a joint comment letter: “Some providers even claim that their products are not loans or credit products, but instead refer to them as payment plans. Regardless of what some BNPL providers and advocates may claim, BNPL financing is credit.”

• Will your program provide reminders that payment of another installment is due? Commenters pointed out that some BNPL firms don’t do so, which may lead to missed payments or misunderstanding regarding when they are due. Missed payments can often lead to penalties, interest or both.

• Is it clear what happens to the outstanding BNPL debt if goods are defective or otherwise have to be returned? This theme came up frequently in comments. One letter notes that returns and refunds are among the leading issues in complaints against BNPL providers filed with the Better Business Bureau.

Among the credit-oriented issues brought up, the most frequent one was “ability to pay.”

“Even if BNPL loans are made at 0%, without a formal determination and legal standard for the borrower’s ability to repay, lenders may make loans for principal amounts alone that could be unaffordable to consumers to repay, and create unreasonable risks for delinquency and default,” writes Consumer Reports.

An issue that comes up in the comment letters is that lenders may not be clear on how much BNPL debt a consumer is racking up overall. They typically only know how many plans and how much total debt the shopper has compiled with their company. The three major credit bureaus, Equifax, Experian and TransUnion are developing differing approaches to BNPL credit reporting. However, a conclusion from their own comment letters and comments by BNPL firms indicate that it is still very early days.

• Is the plan explicit regarding fees and penalties and what lenders will do if the borrower doesn’t pay? In its comment letter, FTA notes that BNPL firms don’t always seek recourse if a borrower defaults, but simply cut them off from future plan purchases. A bank getting into this might need to make its policy clear.

• Does your pending buy now, pay later offering include the same dispute protections that are made available to credit card customers? A comment letter from PSCU, a credit union service organization specializing in payment services, points out that some BNPL firms don’t provide such protections and that “many consumers have come to expect” treatment akin to that in credit card programs.

• Does your BNPL strategy address the risk of fair-lending issues? One point to consider: “Due to widespread publicity and availability of BNPL credit, fair lending issues surrounding the product are far less likely to involve exclusionary issues, such as redlining, and more likely to involve risks related to unaffordable lending targeted at — or disparately impacting — protected groups.”

That comment comes from a joint letter sent by the Center for Responsible Lending, the National Consumer Law Center and the Consumer Federation of America. The letter also points out that BNPL providers may offer differing plans at different merchants — “which could result in disparate impacts due to the merchants’ different demographic bases.”

In fair-lending terminology, “disparate impact” can arise when results appear to vary along racial or other protected lines, even though no intentional different treatment occurs.