Subscribe Now Get The Financial Brand's FREE Email Newsletter
Sales of all-electric cars and trucks is growing and financing of those sales has doubled. While Tesla dominates the field with its partners, third-party lenders can still break in with their own programs. Possibilities beyond purchase loans, like affinity credit cards, also beckon.

Surging gasoline and diesel fuel prices are among the factors that may bring on a surge of another kind: purchases of electric vehicles.

Already, fully electric or hybrid cars and trucks are accounting for a larger share of U.S. vehicle sales. In 2021 Americans purchased about half a million fully electric vehicles, not counting hybrids. AutoPacific, a research firm, forecasts that this will rise to 700,000 in 2022 with strong annual increases on top of that over the following five years. 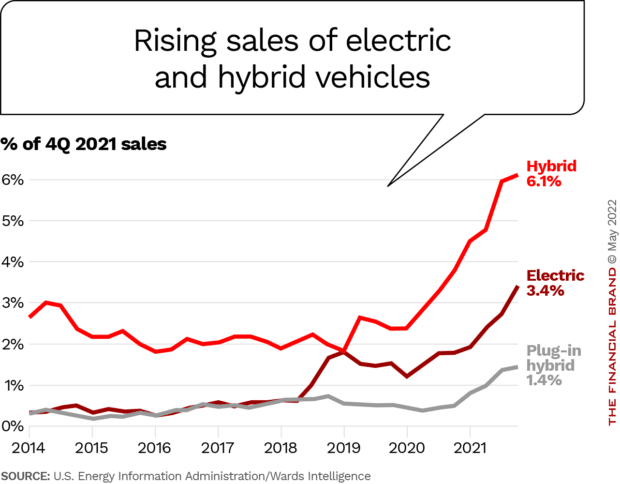 AutoPacific’s surveys of people intending to replace their cars that four out of five planning to buy electric vehicles of some type say they’ve made that decision because “charging is cheaper than fueling.”

Electric vehicles are becoming a viable factor and a growing source of potential business, not only for the vehicles themselves, but auxiliary necessities such as home charging stations and related installation services. Banks, credit unions, manufacturers’ captive finance companies and others are all in the mix. 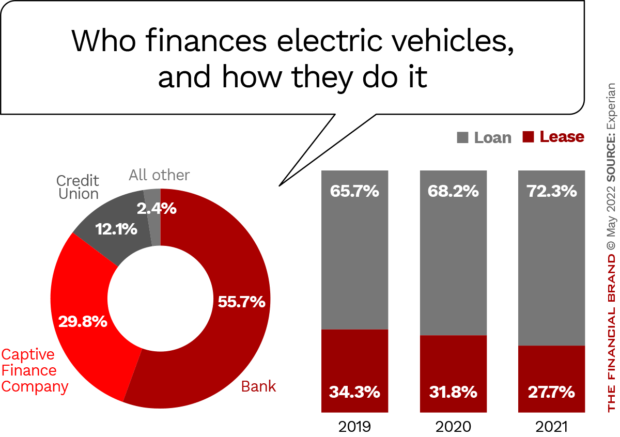 The potential may go beyond loans. Some credit card issuers that provide cashback for gas purchases have started offering parallel incentives for charging expenses at public stations. So far no electric vehicle affinity card appears to have surfaced, but that may only be a matter of time.

Electric vehicles still have an element of a “movement” about them — no pun intended — and owner groups exist that would be a natural for affinity marketing. U.S. Bank has issued a Visa card for members of the Harley Owners Group — HOG — for some time. Features include points redeemable for Harley-Davidson gift cards. In 2020 LinkedIn’s marketing division developed the Electric Vehicle Affinity list, which even back then had a population already topping 17 million worldwide.

There are one-off marketing opportunities, too. For example, Aspiration, the card and app devoted to environmental causes, has promoted itself as a worthy way to pay for charging because it invests nothing in fossil fuels.

Banking institutions like USAA that also sell auto coverage have opined in company blogs about the impact of electric car ownership on insurance costs and that could lead to specialized products. O Bee Credit Union in Washington state not only offers 100% financing for qualifying electric vehicles and borrowers, but will also package the loan with mechanical breakdown and other coverages.

It’s not so much of a stretch to think that over time some smart financial marketer won’t figure out a way to roll all of this into one account. Related apps are already in development, such as one from Tenet that will track savings in dollars and CO2, monitor battery health and more.

How Green Vehicle Sales Growth is Being Financed

Unlike mainstream automakers that have moved into electric vehicles in some way, Tesla does not have a captive finance company. Instead it offers financing through five bank partners: BMO Harris, Chase Bank, TD Bank, U.S. Bank and Wells Fargo. Some lenders finance specific Tesla models. Tesla essentially serves as a loan broker. (Tesla releases only production figures and not sales figures, according to Capital One’s Auto Navigator site, hence the mismatch in two of our charts.) 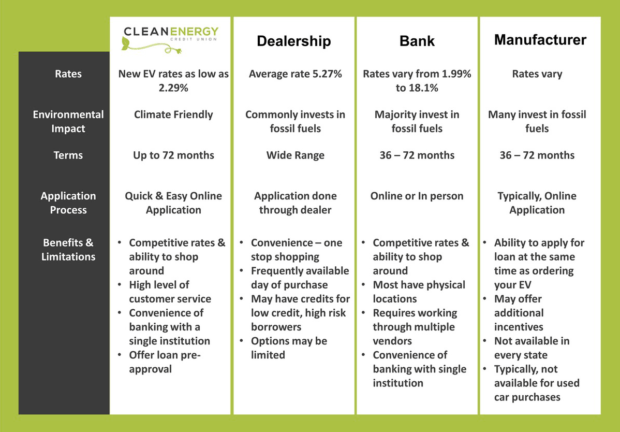 Here’s how Clean Energy Credit Union promotes its electric vehicle loans versus other sources. The specialized institution has made over 7,000 clean energy loans of all kinds.

“Fully electric” cars has a specific meaning, and the figures above refer to those types of vehicles.

Here is an explanation of the distinctions among the types of vehicles currently on the market:

All-electric vehicles, or just electric vehicles for short, are also called battery-electric vehicles. The car is exclusively powered by a large battery that must be charged periodically from an external source. (These are the vehicles set apart by the green section of the bar chart below.)

Electric plug-in/gas vehicles, often called plug-in hybrid-electric vehicles or “PHEVs,” contain both an internal combustion engine and an electric motor. Either or both may power the car at a given time, depending on the model, and the electric motor can be charged by an external source.

Gas/electric hybrid vehicles are primarily powered by a gas engine, with the battery pack and electric motor providing supplemental power.

Flex fuel vehicles can run on gasoline or a blend of gas and as much as 83% ethanol.

The chart below illustrates the share of vehicle financing represented by all the types above, as well as others that aren’t fully gasoline powered. 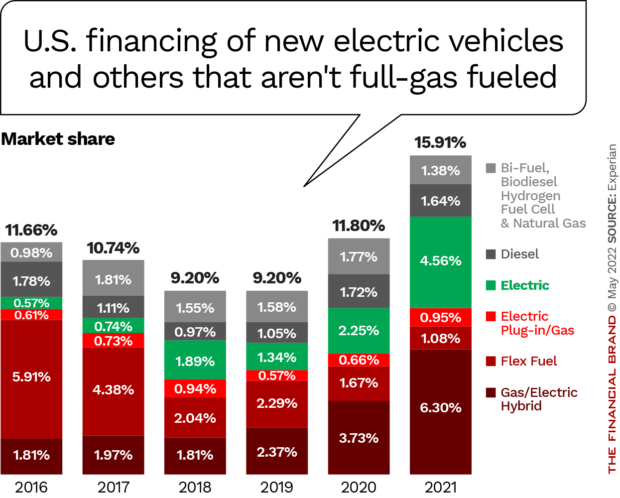 Electric vehicles still represent a minority, but growing, preference. In early 2022 research by CivicScience found that people considering a vehicle purchase intended to buy a gas-powered vehicle 51% of the time. But 13% want gas/electric hybrids, 7% want PHEVs and 7% want all-electric vehicles. (21% aren’t sure, given all the choices.)

Among banking institutions, more is going on than simply deals with the dominant player. Some examples: