Subscribe Now Get The Financial Brand's FREE Email Newsletter
The largest neobanks continue to grow in market cap and number of customers served, while the majority of traditional banks are being challenged to keep pace. Will recent innovations and the addition of physical banking capabilities by Chime be a fintech trend that will create an even greater structural shift?

As the pandemic drove more consumers to tech-enabled banking, traditional banks and credit unions needed to quickly play catch-up with fintech firms that delivered products and services that were quicker, easier, more contextual and more cost-efficient. Despite the reality that many neobanks rely on traditional banks to provide services such as holding insured deposits, younger consumers are flocking to non-traditional providers for innovative and low-cost products that serve their unique needs.

In fact, roughly 30% of Americans use some type of online-only banking, according to Plaid’s 2021 Fintech Report. One drawback of many of the neobanks is the lack of branches and the fees related to depositing funds or replenishing debit cards. In many cases, this stands in the way of a neobank becoming a consumer’s primary bank.

Chime is the largest neobank in the U.S., with over 12 million customers. According to Insider Intelligence, Chime is expected to reach 22.7 million account holders by 2025, improving its position among both digital-only and traditional banking competitors.

Chime offers “spending” (checking) and savings accounts without monthly fees as well as a secured credit card. The spending account offers free access to over 60,000 ATMs and a fee-free overdraft program that covers up to $200 if the customer signs up for direct deposit. Other features include receiving a paycheck two days early and a credit builder credit card. The majority of revenue generated by Chime comes from interchange fees, estimated at $600 million in 2020.

Similar to many neobanks, cash deposits are available at several large retailers for a nominal fee. The completely digital account opening process is significantly easier than at the vast majority of traditional banks. The rapid growth of Chime has positioned the neobank as a top 10 financial institution based on number of customers. Chime also raised $750 million in July 2021, at a valuation of $25 billion, positioning the neobank as next fintech startup to seek an IPO in 2022. 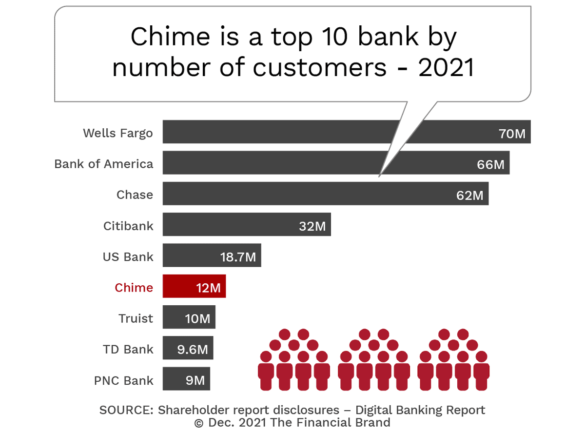 Read More: Chime Leads U.S. Neobanks With Aspiration and Current on Its Heels

Even when measured by the number of customers who consider Chime to be their primary banking relationship, Chime ranks as a very formidable competitor, with nearly 8 million customers, based on an analysis done by Cornerstone Advisors. Even though the Chime customer base is younger, with lower incomes, education and employment status, the offering from Chime definitely meets the needs of a consumer who has not been served well by the traditional banking organization in the past. 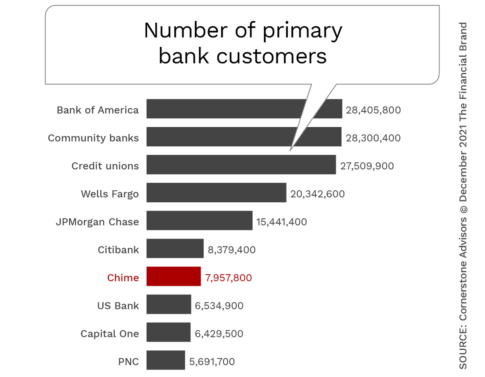 Chime Removes Fee for Deposits at Close to 9,000 Locations

One of the challenges customers of fintech firms like Chime have is the ability to make cash deposits easily … and for free.”We know having access to a physical location for cash deposits is important to our members, and until recently, the options have been limited,” Chime co-founder and CEO Chris Britt said in a statement, according to Bloomberg. Chime has removed this barrier recently through an agreement with Walgreens, whereby customers can make cash deposits without a fee. Chime’s customers can also make deposits with a nominal fee at the physical locations of CVS, Walmart and 7-Eleven.

When we look at the number of fee-free deposit branches offered by Walgreens, Chime has more physical locations than any traditional financial institution in the U.S. While there will not be any advisory services offered at these Walgreen locations, the existing customer base of Chime, that often live paycheck to paycheck and are heavier users of cash, will be the most appreciative of this added capability. Virtually all other digital-only banks have a fee for reloading a debit card or making deposits at major retailers. 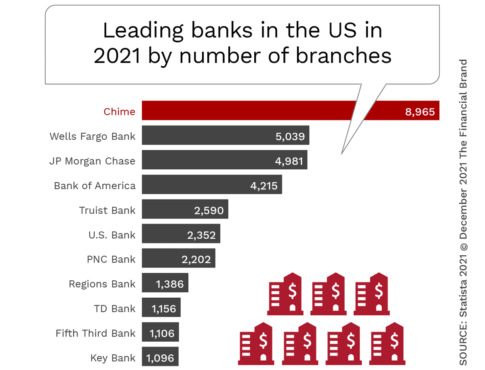 Why Bankers Should Be Concerned

Similar to the majority of fintech firms, Chime focuses on providing low-cost basic banking services driven by mobile functionality, big data, contextuality, cloud computing, and personalization. With the addition of close to 9,000 locations where customers can make cash deposits, Chime has increased no-fee accessibility beyond digital transactions. Probably of greatest concern for traditional bankers is that there is no way to profitably respond to this threat.

Most traditional banks still depend heavily on outdated platforms and legacy infrastructure. Without significant digital banking transformation (and massive reduction of underlying costs), legacy infrastructures can’t support the new wave of digital products and services that many segments of consumers want or the agility and innovation people increasingly expect. While many consumers may retain a traditional banking relationship, loyalty to a bank that is slow to respond to market needs and still have costs associated for basic services becomes fragile.

The good news for bankers is that traditional banks retain the trust and confidence of consumers. Legacy banks also have a treasure trove of data and insights that can provide the foundation for innovation and digital banking transformation. The bad news is that the longer it takes for the needed digital banking transformation changes to occur, the more trust and confidence consumers will have for non-traditional financial organizations like Chime (or potentially Walmart or other major forces). This shift in trust and confidence will result in even more consumers using fintech firms as their primary bank.