Subscribe Now Get The Financial Brand's FREE Email Newsletter
The successful U.K. challenger bank recognizes the need to expand its marketing from mainly organic and word-of-mouth as it seeks to propel growth, especially in the key U.S. market. A new CEO is intent on having the mobile bank live up to its mission to redefine how consumers interact with their money.

It sometimes feels like Europe — and specifically the United Kingdom — is the neobank capital of the world. Over the past decade, dozens of such fintech banking disruptors have popped up in that part of the world and have made waves in the banking industry.

The waves for overseas neobanks like Revolut, N26 and Monzo have so far been ripples in the U.S. market, even as homegrown brands — notably Chime, SoFi and MoneyLion — have made their own waves. This could be changing, and this article focuses on the prospects for Monzo.

Monzo built its brand by focusing on word-of-mouth advertising and having loyal customer advocates.

Much of Monzo’s marketing and advertising efforts to date have been focused on organic and grassroots efforts, using strategies such as on community meet-ups and hackathons to spread the word. But while that may work for a while for a boot-strapped startup, Monzo is expanding its brand strategy as it seeks to grow even more in the decade ahead.

The Road to 5 Million Customers

Monzo started life in 2015 offering prepaid cards. It was founded by a group of people that had previously been at another prominent U.K. neobank: Starling Bank. Following Starling’s lead, in 2017 Monzo was granted a banking license by the U.K.’s Financial Conduct Authority and has since branched out to offer services such as business banking, loans, debit and credit cards, checking, savings, and treasury services. 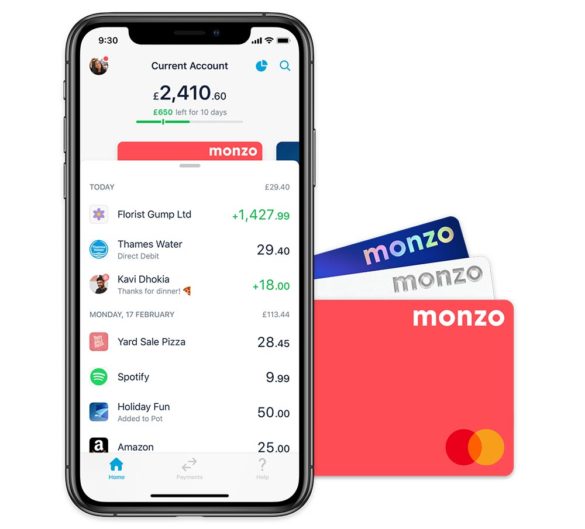 In 2019 it announced plans to expand into the United States, however the Covid-19 pandemic delayed those plans somewhat. In the spring of last year, ex-CEO Tom Blomfield said of the U.S, plans “Certainly some of it has slowed down a bit…and it’s unclear whether that’s going to be a long-term or short-term thing,” in an interview with Wired U.K.

In the U.S., Monzo uses Sutton Bank to enable it to provide deposit account and card services.

A blog on Monzo’s website touches on the current status of its U.S. expansion roadmap.

“Our 2021 roadmap has two focus areas,” the blog reads. “First, we know we need to build additional functionality that will allow you to get day to day banking tasks done — things like ACH payments or Plaid. Second, we want to launch a series of tools that will help you better manage your money. Some will be features we already have in the U.K., while others will be brand new for the U.S. market.

“By the end of 2021,” the blog continue, “our ambition is that you can use Monzo for all of your everyday banking needs, while also giving you better visibility and control than you’ve ever had before over your money and spending.”

In the U.K. Monzo offers a wider range of mobile banking accounts and features than U.S. neobank do including business accounts, junior accounts, joint accounts, and Monzo Plus, a premium account offering “full financial visibility, with your other bank accounts and credit cards all in one place.” The U.K.’s open banking regime makes Monzo Plus more feasible there.

Monzo currently has around 1,600 employees and has raised in excess of $400 million in funding, per Crunchbase, with a valuation of $1.6 billion as of February 2021, according to WhiteSight. It has about five million customers worldwide.

Top neobanks operating in the U.S.

Blomfield, also one of the company’s founders, left Monzo earlier this year and the current chief executive, TS Anil, has an extensive financial services background, working for such firms as Citi, Visa, Standard Chartered and Capital One. Chief Product Officer Mike Hudack comes from a more traditional tech background, with stops at Deliveroo and Facebook. Meanwhile, some of the ex-Starling founders of the neobank remain, such as Chief Technology Officer Jonas Tempelstein. Other members of the executive team have a similar mixture of traditional financial services or tech backgrounds.

Monzo was founded by several ex-Starling Bank employees, and its executive team has a mix of people with tech and traditional finance backgrounds.

The company has had a few hiccups to deal with as well along the way, most notably an issue where many customers were frozen out of their accounts, some for weeks at a time, as reported by Business Insider. Monzo has said this was due to antifraud measures being implemented, where suspicious activity was detected on certain accounts.

Powering Up the Marketing Machine

With 5.24 million customers, per the company’s website, Monzo has certainly made great strides, but still has a fraction of the customers of a large megabank. In addition to competing for customers with traditional banks, it also competes with fellow European digital neobanks such as Starling, N26 and Revolut, and in the U.S. with Chime, SoFi, Varo Bank and Current, among others.

That’s one major reason why Monzo has been beefing up its presence in more traditional marketing channels to supplement its word-of-mouth ethos.

“All of those [word-of-mouth] activities bring people close to the brand and we’re still doing that but we’re also looking into traditional marketing as well. We’ve been running YouTube ads … and ads on Facebook and Google,” Monzo’s head of marketing, Tristan Thomas, told MarketingWeek. “This is us going from a company that just uses word-of-mouth to one that also uses traditional marketing to supercharge that.”

Thomas also noted that Monzo is banking on “radical transparency” as a way to attract new customers.

“Radical transparency is about two things for us: changing the way that businesses normally interact with customers and also just building the business we want to build,” he added.

Like many neobanks of its ilk, Monzo has high aspirations to fundamentally change the financial experience for consumers. CEO Anil told Sifted that “Longer term, we want to really redefine what it means to interact with your money no matter where you are.”

He also revealed a bit of insight into Monzo’s high-minded goals: “Our biggest threat is that we don’t live up to our own potential. There’s such an opportunity for Monzo to make money work for people all over the world, and it’s up to us to meet that challenge. We need to stay close to our customers, understand what they’re feeling and what they need, and build new things that really solve their problems.”

Monzo has big plans to change the way people interact with their money, but still must achieve profitability as a business.

For now, at least, it seems as if Monzo will continue to try and achieve its goals as a private company and currently has no exit plan, Anil further stated.

“We have no plans to sell; the goal is to bring an exceptional banking experience at a global scale. And it’s too early for us to have an exit plan – we’re just getting started,” he said.

Furthermore, the company has yet to turn a profit; it recorded losses of more than 100 million in 2020. It noted in its 2020 annual report that, a major goal is “building and implementing our long-term business model to help us, and our customers, through the ongoing Covid-19 pandemic and set us on a path to become profitable and more sustainable.”

Monzo certainly has generated quite a bit of buzz since it launched, and boasts a fiercely loyal customer base. Whether it can build on that and achieve profitability and acquire a large, U.S. customer base will be something to watch closely.