Subscribe Now Get The Financial Brand's FREE Email Newsletter
Getting banks and credit unions further down the digital road is imperative, but it can't happen if tech leaders and marketers aren't working together. While cooperation is often lacking today, some simple fixes like better communication, starting with some common vocabulary, can jump-start improvement.

For years, no one in banking gave much thought to how well the top marketing officer and the top technologist were working together. The CMO labored away at the creative side, supervising production of advertising and communications. The head of IT kept the computers running. Neither had much to do with the other. It was almost like a left-brain/right-brain kind of split.

“The rapidly growing role of data and technology in marketing has made the idea of a hybrid creature begin to make sense — the ‘chief marketing technologist’.”

Simpler times. Now the top marketer has to be as much a numbers person, and a strategist, as a creative type, in order to understand and apply the increasing amount of data necessary to use to run a modern bank or credit union. And the top technologist can’t hide in the data center, monitoring the institution’s server farms or cloud storage from a terminal. Increasingly, it’s necessary for them to become partners who understand each other’s turf — even sharing it. Both disciplines have a role in the transformation of banks and credit unions.

In some ways the rapidly growing role of data and technology in marketing has made the idea of a hybrid creature begin to make sense, the “chief marketing technologist.” The Harvard Business Review describes this kind of person as “part strategist, part creative director, part technology leader, and part teacher.” One might add, part go-between, part-ambassador, and perhaps even “translator.”

In such an atmosphere of teamwork and collaboration, banks and credit unions would find the digital transformation of their institutions and their industries a piece of cake, more or less. At least with everyone pulling in the same direction, transformation could proceed more quickly.

But while this would be a good state of affairs, banks and credit unions still have a quite a ways to go before it will be very common. Their challenges are a subset of those facing many companies witnessing disruption to their traditional models as new technologies revamp process and redefine competition.

Forrester’s Thomas Husson notes in a report, “CMO-CIO Collaboration: Resolving the Paradox,” that he and his team “struggled to identify a great pair of CMO/CIOs who had a meaningful impact on their business. Worse, throughout the course of interviews, we discovered a high level of skepticism and even frustration among the C-Suite.”

Why such skepticism and frustration? In part, perhaps, because the clock has been ticking for some time. In an article of half a decade ago that has become a touchstone in this area, McKinsey authors put it plainly:

“CMOs, who are responsible for promoting growth, need the CIO’s help to turn the surfeit of customer data their companies are accumulating into increased revenue. CIOs, obliged to turn new technology into revenue, need the CMOs to help them with better functional and technical requirements for big data initiatives.”

A key point of the McKinsey article, “Getting the CMO and CIO to Work as Partners,” is that there are cultural challenges to be overcome in building this partnership in each organization. There’s still room for each to improve their perception of the other, for a start.

The ideal strategic partnership remains elusive, the Forrester research found. As shown in the chart below, only 12% of B2B company’s global marketing decision makers surveyed feel that CMOs and CIOs have such a relationship. And only a handful more (16%) of respondents from B2C brands thought such collaboration existed in their companies. 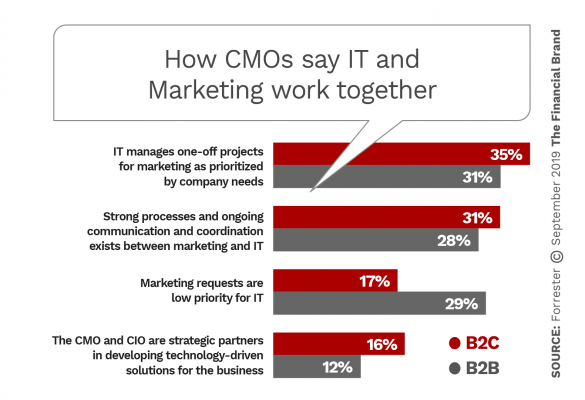 As the chart shows, in some cases IT gives Marketing’s needs low priority, especially in B2B operations. In a decent number of firms the relationship is stronger, but it’s not a majority by any means. It’s hard to warm up to collaboration when the intended collaborator doesn’t quite see you as important.

Husson’s diagnosis of what’s wrong: “Frequently, CMOs and CIOs have misaligned goals. CIOs focus on optimizing costs to securely implement the technology while rarely measuring customer experience metrics. CMOs focus increasingly how customers perceive the brand experience across channels but without ROI constraints on how the technology is deployed over time.” 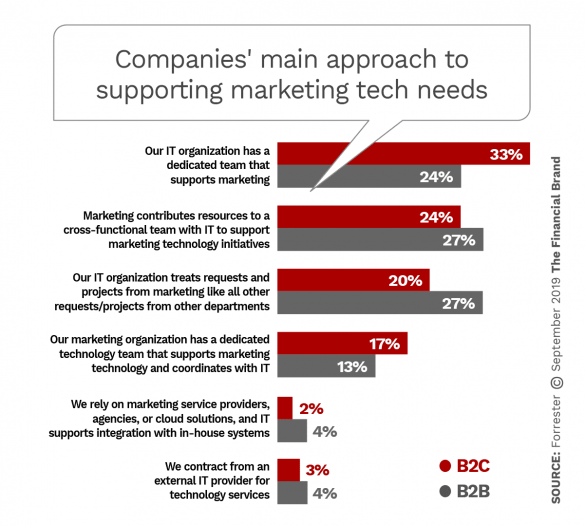 Terminology by itself can be a fundamental disconnect. In financial institutions as well as other types of companies, Marketing and IT don’t even speak the same language. The Forrester report notes that to a technologist, for example, “agility” connotes a specific type of software development process. By contrast, a marketer uses the word more loosely, implying fewer bureaucratic restraints on reacting to competitive challenges.

Some experts suggest, quite literally, that the first task towards building cooperation is development of a written glossary of common terms.

The McKinsey article points out that the two functions come at projects differently, too. “To the CMO’s mind,” the authors write, “defining use cases, for example, should involve writing a few clear sentences. The CIO, on the other hand, might expect ten pages.”

Jurisdiction can be challenging. In many organizations, the study found, CMOs don’t have direct charge over digital transformation — only one in five oversee strategy in this area, and only 16% direct execution of the strategy.

And there is also a sort of “mission tension.” Both functions have “day jobs” that have to be done, and done well, in addition to squiring their institution into the promised land of transformation. In a study by CIO.com, 73% of IT leaders surveyed said they must “strike a balance between business innovation and operational excellence.” As one executive told the publication, “You can’t forget the basics. If you can’t deliver core services, why is anyone going to come talk to IT about strategy?”

Building on a Thin Foundation for the Future

In Accenture’s study “Way Beyond Marketing: The Rise of the Hyper-Relevant CMO,” researchers examined the behavior of CMOs who the firm characterized as pioneers. Only 17% of the sample classified themselves as such. These individuals were deeply involved in rethinking their roles within their organizations.

One factor setting them apart from their peers was a much stronger tendency to connect with other executives in their companies. While “breaking down the silos” has become a cliché in banking circles, the study found that the “pioneers” take this quite seriously. Many consider improving their relationship with CIOs and the rest of the IT contingent to be very important.

Simply better understanding the pressures each side faces can help improve collaboration, according to the Forrester report. “Slow decision making and a lack of urgency from IT organizations is often why the CMO goes rogue,” the report states.

Forrester also suggests that both CMOs and CIOs can help each other’s function improve their influence in the organization by combining forces.

Specifically, the report indicates that having a common set of performance goals can help IT and Marketing work better together.

And it’s OK to call in help.

“If you can’t agree together,” the firm advises, “ask your CEO to define goals.”