Subscribe Now Get The Financial Brand's FREE Email Newsletter
With so many financial, technological and delivery advantages to being a digital bank, the best strategy for traditional banking providers may just be to start over and build a digital-only component on top of their legacy business.

Banking has been conducted in pretty much the same way for decades. While some of the legacy processes have been replaced by new technology and digital capabilities, much of the foundation from the 1970s remains. This infrastructure and legacy culture places traditional financial institutions at an increasing disadvantage compared to digital alternatives.

The response from some of the mega banks has been to introduce digital-only units to supplement their legacy banking organizations. But is this enough? Should more banks and credit unions consider starting over – building digital banks that can take advantage of the technologies, efficiencies and reduced risk of a digital entity?

In the report, “Time to Start Again: The State of Financial Services 2019,” published by Oliver Wyman, there is the recommendation that current financial institutions should start with a blank canvas. The combination of the old and new is referred to as a “greenfield concept.” The concept would free financial services firms from legacy infrastructure enabling firms to leverage “new technology, entirely new organizations, and complete customer-centricity,” states the report.

Read More: The Dangers of a ‘Digital First’ Strategy in Banking

The Power of Digital

There is evidence throughout the economy of the power of digital. Amazon has replaced the legacy big box retailer while providing smaller retailers the ability to reach micro segments efficiently. Netflix has disrupted the video industry, with its eyes on disrupting Hollywood production giants altogether. Uber and Airbnb have changed personal travel and lodging, while hundreds of thousands of smaller digital start-ups have supplanted many firms unable to serve the digital consumer.

The same is true in retail banking, where huge digital players from China and significantly smaller neo-banks in the UK and elsewhere are changing banking’s competitive landscape. In each case, there is the combination of the efficiencies of digital technology and the focus on an improved customer experience that is hard to achieve with old infrastructures.

Some financial institutions are trying to keep pace by partnering with fintech firms that have the agility only hoped for in a traditional bank. These collaborations definitely improve the consumer deliverables, with faster go-to-market capabilities, but the pace of change in the marketplace is far exceeding the ability to keep up using a bank + fintech model.

The challenge is not other traditional banks – it is the big tech players such as Google, Amazon, Facebook, Apple, Alibaba and Tencent that could directly attack the banking model as we know it at any time.

As outlined in the Oliver Wyman report, a greenfield approach enables existing businesses to build new businesses, leveraging the benefits from the existing firm. The new venture has the power (and advantage) of working independent of the legacy organization, with a new and unique culture, investment strategy and objectives. These new entities may be highly focused on a specific segment or consumer need or be much broader, mirroring the legacy organization.

A great example of the greenfield approach is Marcus from Goldman Sachs. While its complete vision for the future is not in place yet, Goldman is breaking down the offerings on its consumer platform into four key areas: Borrow, Spend, Save, Protect with 12 separate products envisioned.

Having Clarity Money as a central component illustrates that Goldman Sachs views personal financial management as a critical piece of the puzzle. Goldman Sachs makes it clear that future services may be developed within or may be offered as part of a strategic partnership. Another aspect of Marcus from Goldman Sachs is that there has been massive investment ($600 million through 2017) in both people and technology to make this entity a reality. 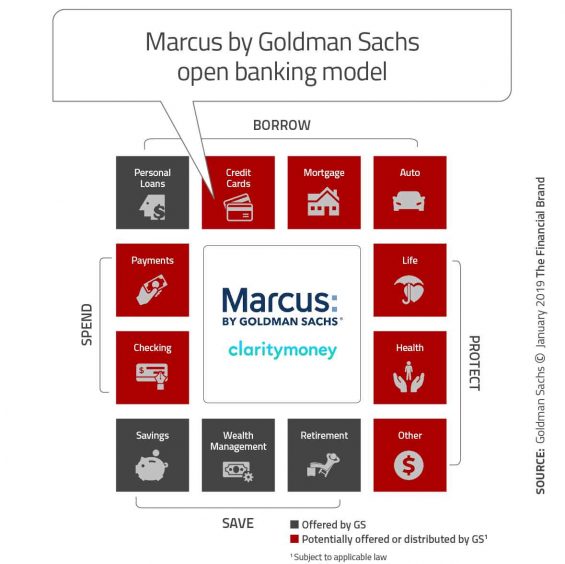 The Digital Advantage in Banking

Since the financial crisis of 2008, banks and credit unions have squeezed costs to the limit. Growth has become harder to achieve and the consumer has become more and more demanding.While the focus on innovation has increased, the level of innovation is not keeping up with market needs. Productivity must improve.

Research by Oliver Wyman illustrates the tremendous disadvantage traditional banks and credit unions have in the marketplace. From the cost of acquisition, to customer-facing friction, cost-per-customer and even the work environment, legacy financial institutions lag digital banks in virtually every category. In fact, the only thing holding back many challenger banks from creating a bigger threat in the marketplace is funding, scale and name recognition. 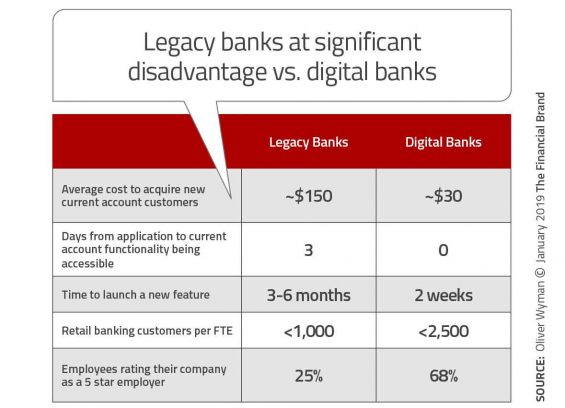 Financial institutions must embrace change, take risks and disrupt themselves. This is not a comfortable process since conventional wisdom gets challenged at every turn. Customer offerings, business models, internal processes, and organizational structures all need to change. And, most importantly, a new culture must take root in the new organization. This is one of the primary reasons a new organization is built – to avoid legacy thinking.

The reasons to get started are clear. It is harder than ever to generate growth or cut costs any further. The competition is not going away and innovation efforts to date are incremental and not enough to catch up with consumer expectations.

A complete re-start is not like a mobile banking app refresh or the introduction of a new technology within a traditional bank. It is truly starting over, with an open banking mindset (like Marcus from Goldman Sachs), leveraging the strong brand, capital and regulatory knowledge of the parent company. That said, the architecture is completely revised to reflect a digital organization from the inside out. Any or all components can be sourced from outside firms for the benefit of the consumer.

Will the new organization disrupt the existing organization from the consumer perspective? It is hoped so, because each consumer who “switches” to the digital bank will cost less to serve and will be better served than in the past. Mapping the past to the future may be difficult, but must be seamless from the consumer’s perspective. New customers don’t have to traverse the friction of the parent company – they would open new accounts with the new digital-only bank.

Not an All or Nothing Transformation

As mentioned, the digital greenfield organization does not need to replicate all of the components or offerings of the incumbent banking organization. To keep costs low and to test elements of the transformation, a bank or credit union could digitize a single component of the business initially. This could be a set of products or all offerings for a distinct segment of the customer base.

By limiting the scope of the initiative, the time from experimentation to deployment could be limited, possibly occurring in a year or less. As mentioned by Oliver Wyman, “A greenfield strategy lets you sidestep the challenges of legacy infrastructure and get you to a truly customer-centric offering faster.”

Customer-Centricity at the Core

Without being encumbered by legacy product silos, management fiefdoms, product-centered goals and technological inhibitors, greenfield businesses can focus on consumer needs from the initiation of development. Just as importantly, the new organization is better able to use data and advanced analytics to drive development and decision making. This enables faster innovation and dynamic product offerings. Banking will begin to look like tech firms, with market responses not possible in the past.

The starting point of the development should be a combination of unmet consumer needs and the ability to deliver a lower-cost, more seamless set of solutions. As engagement with the customer occurs, a flywheel momentum of insight and deployment occurs as it does with firms like Amazon.

To succeed in the future, financial institutions will need to disrupt themselves. This will require top-down support with the willingness to embrace change and allow for risk taking. There will need to be adequate budget and a focus on consumer needs. Those firms who can move forward quickly and decisively will be the winners.