Subscribe Now Get The Financial Brand's FREE Email Newsletter
A year into the newly minted position of Chief Client Care Executive, a Bank of America senior officer relies on two critical tools to help her track performance. One, a tech-powered survey, gives team leaders and individual employees instant input on every interaction. The other is a surprisingly old-school, but effective, tool.

They say banking is still a people business, despite all the automation. In fact, because of all the automation and the shift of so many routine transactions to digital, some argue that it’s more important than ever to track how an institution is doing at keeping consumer and small business customers satisfied.

Holly O’Neill is one banker who believes that. In the year she has served as Chief Client Care Executive and Head of Consumer Client Services for Bank of America, two initiatives have helped O’Neill and her colleagues monitor and improve customer experience. One is a sophisticated real-time customer interaction mechanism called Voices. It sends 90 million email surveys a year to retail and small business customers following a customer interaction.

The other is the polar opposite of that tech-driven tool — in-person dialogs between national and regional BofA leaders and small groups of consumers or heads of small businesses. O’Neill has arranged 25 of these gatherings so far. 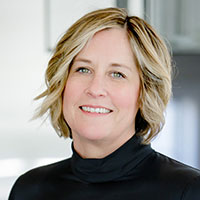 O’Neill’s mandate is to drive a client-focused culture across BofA’s consumer bank, which includes small business. She has worked in the BofA organization for 23 years, beginning as a credit analyst trainee, rising to become COO of the Corporate Banking Group. More recently she was COO of U.S. Trust, Bank of America Private Wealth Management. She was also a COO of Merrill Lynch’s Wealth Management, Private Banking and Investment Group.

O’Neill points out that though she has the title of Client Care Executive, the responsibility for overseeing customer experience of 66 million consumer and small business clients is a partnership with other executives within the consumer bank, overseen by Dean Athanasia, President of Consumer and Small Business. O’Neill also manages BofA’s contact centers. One of her goals is to ensure that Bank of America feels like one business for clients.

The “client care” part of her title was chosen deliberately, even though O’Neill says that as a practical matter “care” and “service” are interchangeable. But “care” does “feel more human,” she tells The Financial Brand. Client service remains a key component, but care is more about the culture and the connection with the customer, O’Neill adds. “We want to make sure we create that personal connection with clients no matter how they’re interacting with us — using a financial center, online banking or our mobile app.”

Increasingly consumer interactions are digital. In just one year from its full rollout, interactions with BofA’s digital assistant Erica climbed to 50 million, and more than 7 million of its mobile banking app customers have launched the chatbot capability.
Read More:

When Hearing Voices Is a Good Thing

Bank of America has deployed the Voices customer feedback mechanism across the entire consumer bank. It is essentially a survey mechanism to measure how the various customer-facing teams are doing. An email-based survey replaced an earlier mailed survey.

Bank of America sends out about 90 million surveys a year to its consumer and small-business customers. It gets about 12 million of them back.

The shift from paper to email transformed the program. When it was done by mail, the data would go into a SharePoint site and a staffer would have to go search it, O’Neill states. It just wasn’t a timely, effective way to improve client interactions, she adds. 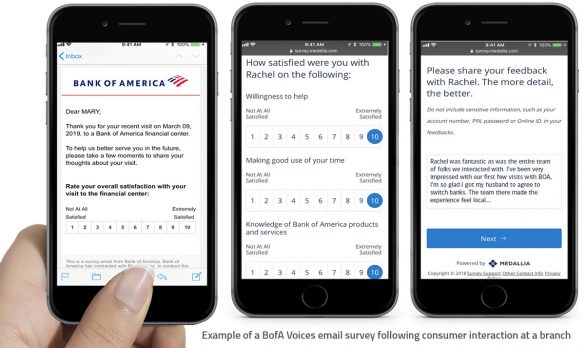 Now, far more surveys can go out than before and for a wider range of interactions. Voices is used not only for “high-touch” interactions in branches or contact centers or with the bank’s home loan and small business teams, but with online and mobile banking, Merrill Edge (the bank’s self-directed trading platform) and even ATMs.

Most importantly, the feedback is near real time.

After a client has an interaction in a financial center or calls into the contact center, the bank sends out a survey almost immediately. The surveys that are answered automatically get ported into the Voices dashboard, seen by the various team leaders as well as by the employee the consumer was working with, whenever it’s a human interaction.

“Right now 45,000 of our people have Voices dashboards on their desktop that every day tell them how they are doing with their clients.”
— Holly O’Neill, Bank of America

“Let me paint a picture of how this works,” says O’Neill. “Somebody on my team in a contact center is taking many calls a day. They have a Voices dashboard that sits on their desktop where they can see the surveys come in. So they can see immediately where they did well and where they have opportunity. Managers can use those surveys to coach our teammates real time, as well. Right now 45,000 of our people have these dashboards that they are looking at every single day, which tell them how they are doing with their clients.”

O’Neill says the bank continues to mature the Voices program, pushing it out further into the bank. A new capability they’re working on will include the ability for team members or associates to “close the loop” and respond more quickly when a customer includes a question in their survey response.

Up Close And Personal Still Works

The bank that has succeeded spectacularly in getting consumers to use its Erica chatbot nevertheless still sees the benefit of in-person contact. This manifests itself in two ways: the bank’s commitment to a high-tech, high-touch strategy, and in the importance it puts on high-level executives hearing directly from clients in face-to-face meetings.

“I want leaders setting time aside talking directly to clients, to get their feedback.”
— Holly O’Neill, Bank of America

As mentioned, O’Neill has orchestrated an ongoing series of customer-leader dialogues around the country. As she says, “I want leaders setting time aside talking directly to clients, to get their feedback on various topics, how the relationships have evolved and so forth.”

That’s no mean feat given the packed schedules of senior executives. She personally participates about 80% of the time. Others who have participated, according to O’Neill, include David Tyrie, Head of Advanced Solutions and Digital Banking; Aron Levine, Head of Consumer Banking and Investments; Steve Boland, Managing Director, Consumer Lending and Sharon Miller, Managing Director, Head of Small Business.

These executives, along with regional leaders, sit down with groups of about a dozen consumers or small business clients and discuss “what the clients think, what they feel, how we can be better.” This direct interaction with bank leadership sets these dialogs apart from the typical focus group run by a third party.

“Coupled with the other more quantitative data we get from our surveys,” O’Neill states, “hearing from clients directly is critical to how we’re building the business going forward.”

Bank of America uses several measures to gauge its overall customer satisfaction. One is a formula it created to aggregate the interaction-based data derived from Voices into a general consumer score. Secondly they survey consumers and business customers for “client sentiment.”

A third measure is brand favorability, calculated by the bank’s marketing team. It’s a survey-based measure of the perception of the brand among consumers and small businesses.

There are, of course, various external surveys of retail customer satisfaction, notably J.D. Power surveys. Bank of America has had mixed results in two recent J.D. Power Surveys. In the 2019 U.S. Retail Banking Advice Study, BofA not only came out on top, but increased its score by 26 points. Bob Neuhaus, Vice President of Financial Services at the research firm, attributes this performance to the bank’s “Life Priorities Model, that tailors financial advice for customers at different life stages.” 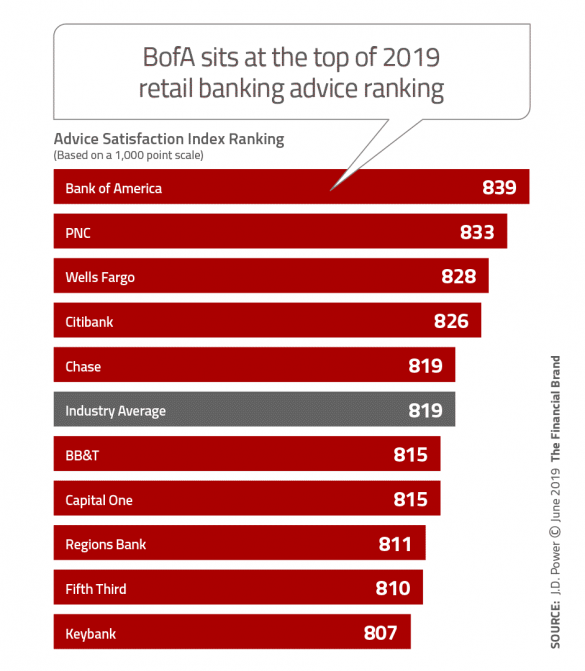 O’Neill says that strong result “speaks to our strategy of high tech and high touch.” That involves making most transactional interactions as easy as possible, usually digitally, while relying on teams of specialists to advise on more complex matters. “We’ve really shifted our financial centers to advice-based centers.” She believes the J.D. Power Advice Study results reflects this model. 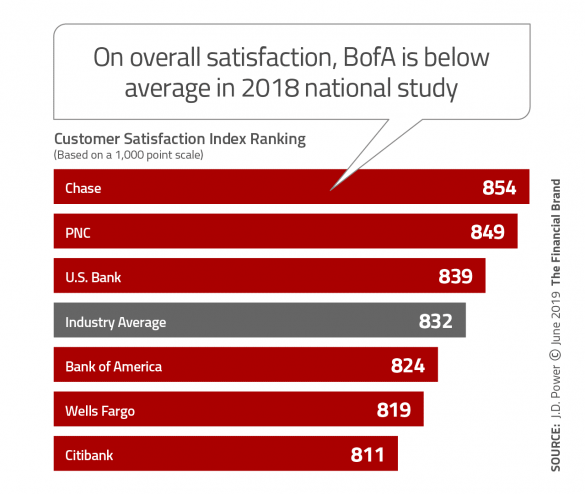 Soaring Digital, but No Exit for Traditional Channels

For the foreseeable future, O’Neill believes retail banking providers Must maintain all channels of service and communication. However, she does see it shifting more towards high-tech methods of client communication — one of the reasons the bank invested so heavily in Erica.

“I see digital growing exponentially over the foreseeable future,” she says, “but I do not see a complete exit of more traditional channels.”

While keeping an eye on that, O’Neill is focused on building and maintaining the right culture with the bank’s consumer teams.

“As you can imagine,” she states, “with a [Consumer Bank] team of 66,000 people, culture is really, really important.” The right culture, however, drives client care and customer experience.