Subscribe Now Get The Financial Brand's FREE Email Newsletter
Richard Fairbank, the longest-tenured CEO among the top U.S. banks, propelled Capital One from a monoline credit card company to one of the largest banks in the country. Despite being notoriously media-shy, the banker drops a few clues as to where he is steering the marketing and digital banking powerhouse he heads.

In retail banking, Capital One punches above its weight in brand recognition. By total assets, the Virginia-based bank is number 11 in the U.S. However, based on brand value, it ranks number six, according to Brand Finance’s latest ranking — well ahead of U.S. Bank, PNC and Truist, all larger banks.

Even more remarkable is that Capital One has existed only since 1994 – Kim Kardashian is older – and yet it has grown to be one of the biggest U.S. banks, competing with giants that are decades or even centuries older. The man largely responsible for that feat, Richard Fairbank, CEO, is still at the helm — a remarkable 28-year tenure.

Fairbank is one of the most media-shy big-bank CEOs ever. Yet while Fairbank is not as well known as some of the more prominent banking CEOs, such as Jamie Dimon of JPMorgan Chase or Brian Moynihan of Bank of America, Fairbank has played a key a role in shaping how financial services are consumed today. 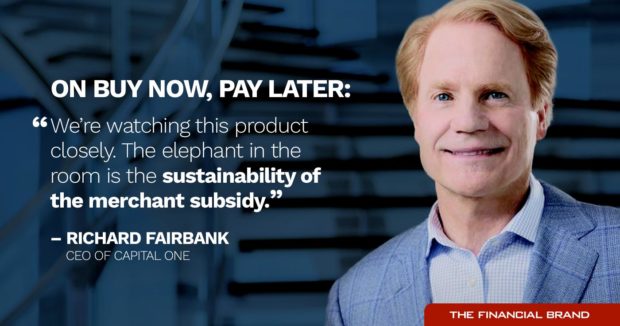 What became Capital One began life as a credit card operation created by Fairbank and Nigel Morris in 1988 as a unit of Signet Bank. Signet spun off the card operation in 1994 with Fairbank becoming CEO. The new company subsequently branched into auto lending, retail banking and business banking through a series of bank acquisitions in the early 2000s.

Despite that expansion, Capital One remains a card powerhouse to this day. It’s “What’s in your wallet?” tagline is so well know it was named one of the greatest as slogans in history by Business Insider.

Under Fairbank, Capital One pioneered numerous innovations in the banking industry — digital and otherwise. Much of this was done through strategic acquisitions, such as its 2012 acquisition of internet banking pioneer ING Direct. However, the bank also develops technologies in-house — including its digital assistant Eno — through the Capital One Lab, and has sought to remake the branch experience with its coffeehouse-inspired Capital One Cafés.

Innovation – primarily in the digital arena – has long been a priority for Capital One.

Capital One Plans for BNPL and Embedded Banking

Despite his lower profile compared to some of his peers, Fairbank has discussed aspects of Capital One’s innovation plans and product roadmap on several occasions, as The Financial Brand found.

One area the bank has plans for is buy now, pay later. That makes sense given the explosive rise in popularity of BNPL services in recent years. Fairbank said in a Barclay’s investor conference in fall 2021 that Capital One would soon be testing a beta version of its own BNPL product.

Read More: Can Banks Snatch Up BNPL Companies in an Overcrowded Marketplace?

“We’re watching this product closely and certainly not taking this growth lightly,” he said, adding that Capital One would be looking closely at the sustainability of BNPL, which he believes is now at least propped up by support from VCs and the willingness of merchants to subsidize the interest costs simply because the product is so popular at the moment.

Capital One also has designs on the banking-as-a-service model and embedded finance. Embedded finance provides an easy and seamless way to deposit, save, pay or borrow without leaving a fintech’s app. The result is the ability for non-bank firms to retain customers and increase the overall value of the relationship. Capital One has engaged with partnerships with several such apps to ensure that they are the bank powering these payments.

Even a powerhouse brand like Capital One recognizes that no one banking provider can meet all consumer expectations.

A blog on Medium from a Capital One executive (not Fairbank), explains the significance: “Why would a bank enter into this kind of partnership? Because this disruption can’t happen in silos. We no longer live in a day and age where one single company or individual can build the ultimate experience. Collaboration and consolidation are key to BaaS; especially as real time, instantaneous, trusted results become the consumer expectation. To think any one company can be the sole proprietor of this shift is living in the dark ages.”

Why Bank M&A Is Not a Primary Capital One Strategy

When it comes to building out the bank’s technology capabilities. Fairbank has said that Capital One will rely on a mix of in-house R&D as well as strategic acquisitions. However, he noted in an early 2022 investor conference that Capital One would likely look to do acquisitions on the smaller side, due to the skyrocketing valuations of many fintech firms and other tech startups.

“In our future, we’ll continue to [do] fintech and sometimes tech company acquisitions, probably mostly on the smaller side,” Fairbank is quoted by S&P Global as saying.

He also added in the same conference that Capital One would likely not look at acquiring other banks as a method of growth.

“Most regional banks … are putting a lot of energy into thinking about other banks that they could buy. And that’s not a quest that we are on per the national banking strategy,” Fairbank added.

Capital One is not looking to buy other banks in order to fuel growth.

Innovation is not only technological. Capital One made news by becoming the first major bank to ditch overdraft fees late in 2021, putting in motion a groundswell of reaction from other large institutions. In a statement, Fairbank said “The bank account is a cornerstone of a person’s financial life. It is how people receive their paycheck, pay their bills and manage their finances. Overdraft protection is a valuable and convenient feature and can be an important safety net for families. We are excited to offer this service for free.”

Capital One’s bread-and-butter is credit cards. It generates the largest portion of the bank’s revenues. For that reason, it’s an area in which the bank continues to innovate, especially as competition around rewards continues to heat up.

The bank introduced a new travel-focused card called Venture X late in 2021 that is designed to take advantage of an upsurge in consumer travel (before Russia invaded Ukraine) and to compete with other luxury cards such as Chase Sapphire Reserve and American Express’ Platinum card. The $395-a-year credit card — which will initially come with a 100,000-mile sign-up bonus as long as a minimum spending requirement is met — was announced alongside news that Capital One is set to open three airport lounges to serve a similar clientele.

“In the card business, competition has definitely intensified especially in rewards,” Fairbank told Fortune. “We saw some modest increases in upfront bonuses mainly in the form of limited time offers and in travel as demand returns.”

With 28 years at the helm of Capital One, Fairbank, 71, is one of the longest-tenured bank CEOs. Nothing publicly has been said about a CEO succession plan by the bank, and it appears Fairbank will continue to lead the institution for the foreseeable future.

In a 2021 memo to employees announcing that Capital One would become a permanent hybrid work company, Fairbank did not sound as if he was stepping down anytime soon.

“On the shoulders of our tech transformation, we will continue to transform how we work,” he wrote. “As always, our quest is to enable our great people to be great in the most fulfilling of ways. I am inspired to join each of you on this journey.”