Subscribe Now Get The Financial Brand's FREE Email Newsletter
JPMorgan Chase sent a letter to Kayne West, giving him 60 days to close his accounts and take his business elsewhere. While the bank hasn't publicly stated a reason, experts point to several cases of banks cutting ties with controversial figures based on "reputation risk." Banks have a right to close accounts for any reason, but taking sides in the culture wars may put their own reputation at risk.

Kanye West is no stranger to controversy. From awards shows and television interviews to social media, he has made jaw-dropping headline comments around race, gender, and politics. He was accused of anti-Semitic remarks on Twitter, and the platform then locked his account on October 10.

Two days later, conservative author and influencer Candace Owens tweeted a letter sent by JPMorgan Chase to West indicating the bank had “decided to end its banking relationship with Yeezy LLC and its affiliated entities.” Yeezy is West’s apparel company.

“We ask that you promptly transfer your business to another financial institution before November 21, 2022,” the letter to West said. 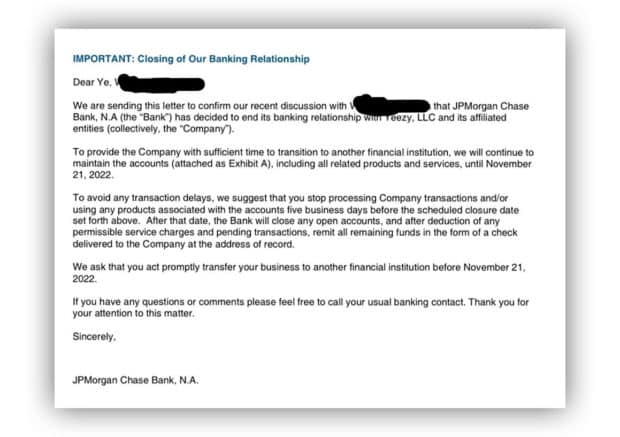 Chase hasn’t publicly commented on the matter, but West, a rapper who now goes by Ye, made it known in an interview on “Drink Champs” on October 15 that he wasn’t happy with the bank.

“I put $140 million into JPMorgan, and they treated me like sh*t,” he said. “So if JPMorgan Chase is treating me like that, how they treating the rest of y’all?” The interview, which had many controversial comments, has since been pulled from YouTube.

The New York Post and many media outlets note the letter from Chase was dated before West’s recent tweet. West also said on September 12 he was cutting most corporate ties, and that “it’s time for me to go it alone.” During that interview, he also criticized Chase for not giving him access to CEO Jamie Dimon.

'I put $140 million into JPMorgan, and they treated me like sh*t…So if JPMorgan Chase is treating me like that, how they treating the rest of y'all?'

The Reputational Risk of Banking With Kanye

The truth as to why Chase is closing West’s accounts may never be known because banks don’t have to give a reason, says Chris Skinner, author and CEO of the Finanser.

“Is it really cancel culture?” Skinner asks. “Or is it something else? They won’t tell you because under regulations and their own bank practices, they’re not obligated to.”

There’s no denying that with years of controversy to his name, West comes with more baggage than an airport terminal. If it wasn’t the recent anti-Semitic tweet, it could have been a dozen other things. And whether or not Chase cut West for his comments, this wouldn’t be the first time a bank closed someone’s accounts.

“This has been a looming problem for quite some time,” Todd Zywicki, George Maron University Foundation Professor of Law, tells The Financial Brand. “But obviously, something is going on where it seems to be picking up steam and becoming more common. And someone decided Kanye is a reputation risk.”

Dig Deeper: Keeping Your Bank’s Brand Out of The ‘Cancel Culture’ Crosshairs

After the Capitol Hill riot on Jan. 6, 2021, several banks — including Deutsche Bank, Signature Bank, and Professional Bank — announced they were closing services for Donald Trump. While a company spokesman wouldn’t comment at the time, Deutsche Bank Managing Director Christiana Riley said in a LinkedIn post that “violence has no place in our society and the scenes that we witnessed are a shame on our whole nation.”

Signature Bank closed Trump’s accounts totaling $5 million and went a step further. “Signature Bank pledges it will not do business in the future with any members of Congress who voted to disregard the Electoral College,” said spokesperson Susan Turkell. In a separate statement on its website, the bank also called for Trump to resign, saying “we have never before commented on any political matter and hope to never do so again.”

Signature Bank announced it was closing its Donald Trump's accounts following the Jan. 6 riots and said it would not do business with 'members of Congress who voted to disregard the Electoral College.'

JPMorgan Chase subsidiary WePay terminated a payment service agreement for a speech by Donald Trump Jr. in November 2021 citing its Terms of Service agreement which bans “hate, violence, racial intolerance, terrorism, the financial exploitation of a crime” or encourages those behaviors. And in February 2022, Minnesota Bank and Trust terminated the accounts of a controversial Trump ally, My Pillow President and CEO Mike Lindell, citing him as a “reputational risk.”

Yet Zywicki believes these cases may only be the “tip of the iceberg” and that such account closures are “picking up steam.” In 2018, a lawsuit against the federal government revealed that through Operation Choke Point, senior federal officials including the FDIC abused regulatory power on an ideological crusade that pressured banks to close accounts of legal gun dealers and payday lenders it didn’t like.

While banks were pressured by the government in the case of Choke Point, they can also be pressured by media, stakeholders, or organizations, says Zywicki.

“[Celebrities and politicians] have a voice, but I think this is also happening to ordinary Americans who have just gotten on the wrong side of the speech police, and no one knows about it,” Zywicki says.

When Banks Should Get Involved in the Culture Wars

Under federal and state regulations, banks have the authority to close accounts for any reason and, as noted, are under no obligation to state the reason. In most cases, banks that gave reason for the closure did so on the premises of “reputational risk,” says Zywicki.

Yet while banks may want to take a stand on important issues, they may have more to lose than they gain in doing so, Bradley Hecht, Chief Customer Officer at RepTrak, tells The Financial Brand. RepTrak works with many of the top banks, and Hecht notes that — unless a bank has a long-standing position on a particular issue and historical context — “the blowback is typically not worth it.”

“If you don’t have a history of being consistently vocal on a topic, and you chose to align yourself with one side or the other on it, you’re opening yourself up to a pretty significant reputational impact,” says Hecht.

Surveys indicate consumers increasingly expect brands to be engaged in heated topics: 47% of respondents in a Forrester survey associate the social, environmental, and political views of CEOs with the businesses they lead. Additionally, more than a third say they are more likely to trust brands when they take a stance, with 43% favoring companies that take a stand on social, environmental, and political issues.

“If you don’t have a history of being consistently vocal on a topic, and you chose to align yourself with one side or the other on it, you’re opening yourself up to a pretty significant reputational impact.”

Yet when it comes to banking, consumers are generally more concerned about operational risk, financial risk, or a case where a bank may be engaging in something unethical like predatory lending or discrimination, says Hecht. Because the U.S. is so evenly split on so many political and social issues, banks that take a stand risk significant blowback from the other side.

For example, after the close of Mike Lindell’s accounts, Missouri state treasurer Scott Fitzpatrick sent a letter to Dimon saying JPMorgan Chase “has made it its policy to discriminate against its customers based on their political ideology” and that the state would not do business with Chase.

Similarly, when employees pressured Disney to take a stance against Florida’s “Don’t Say Gay” bill March 2022, it faced pushback from state political leaders and mistrust from consumers and employees. By April, the political backlash contributed to a 19% market drop in Disney’s stock.

If a bank does feel compelled to make a public stand on an issue, they should be “very deliberate and consistent” with a very clear message that aligns with their history, says Hecht. “If not, it ends up looking like you’re targeting a profile of a person,” he states. “And you open yourself up to the perception that you’re inconsistent.”