Subscribe Now Get The Financial Brand's FREE Email Newsletter
Crafting the right marketing messaging is increasingly complex as digital channels proliferate and consumer attention span shrinks. Promoting empathy for lifestyles over product selling is one way to stand out.

Which came first? The two-second consumer attention span or the seemingly ever-widening range of channels now used to grab that sliver of consumer consciousness?

There’s little time to ponder this chicken-or-egg conundrum. Financial marketers not only have to find ways to reach consumers with their messages, but also to do it better, more frequently, more efficiently and more successfully than a growing roster of competitors.

“Today, it’s all about authenticity and storytelling.”
— Laura Ziemer, Comperemedia, a Mintel company

Marketing expert Laura Ziemer has been studying financial services marketing strategies and recently issued a report on major brand campaigns that make use of omnichannel marketing. The idea, she explains, is to pick and choose among about 15 different marketing channels for the ideal mix to sell consumers on those brands.

“With so many potential touchpoints across digital platforms and increasingly sophisticated targeting capabilities, there are more opportunities for competitors to get their message in front of your customers than ever before,” writes Ziemer in a report on omnichannel marketing. Ziemer, Director of Insights at Comperemedia, a Mintel company, says that to fight back, financial marketers must balance four key elements: channel, message, creative and audience.

When there were fewer channels, and fewer devices vying for the same 24 hours humans have always had, the marketer’s job was more straightforward. Essentially they were pushing brand or pushing product, and using traditional mass media and direct mail to send the message. Now, not only have new channels emerged, but old channels have morphed, and the essence of what brands need to do has changed.

Empathize with the Consumer, Don’t Get in Their Face

“Today, it’s all about authenticity and storytelling,” says Ziemer in an interview with The Financial Brand. “We consumers are very savvy. We’re exposed to marketing messages all day, every day on our phones, on our desktops, going to and from work, on TV, and more. The challenge is to stand out from the clutter by showing that your brand wants to connect with the consumer and support their lifestyle.”

What’s in: “It’s not about chasing the individual sale. Making that lifestyle connection is what will cause the consumer to pause and mentally process the message they’ve been presented with.”

What’s out: “Here’s our product. Here’s our introductory rate. Here’s what we’re going to offer you.”

That’s the elevated view. The closer you get to the ground, the more complex omnichannel marketing gets, according to Ziemer. Increasingly, multiple interactions with the consumer must successfully occur before the needle will begin to move, perhaps resulting in their considering enrolling with a new brand.

“That’s where the concept of multi-touch attribution comes into play,” says Ziemer. While multiple influences have always played a role in consumer decisions, she says, it was a matter of gut feel. Now, more advanced analytical tools make it easier to monitor these influences. Beyond tracking, brands can use immediate digital feedback to better reach target consumers across multiple channels.

It’s not just the need to tap the right combination of channels, but also the need to send the right kind of message across those channels — and to be measuring the impact and being ready to adjust based on what’s seen. Financial brands now must use different creative and different messaging for each channel.

Ziemer says that consumers will mentally reject redundancies and repetition when it’s the same across every channel that a brand is using, and even within the same channel.

She uses the range of social media platforms as an example of the need to tailor and create for each place your message appears.

“Use each channel to build on itself or to offer something unique,” says Ziemer. “If you are putting the same post in each channel, there’s no incentive for people to follow your brand across all those different channels because you are telling them the same thing in every place. They’re not learning anything new about you that would potentially pique their interest.”

GEICO repeats itself over and over in many of its video ads and Ziemer feels that after a while these get tuned out. Viewers are jaded, they want new things.

However, she says, approvingly, that GEICO uses Facebook marketing to promote a multitude of discount programs that the insurance carrier offers in partnership with gyms, fraternities and other organizations.

“They position the ad in a different way, with a different brand that is already part of the consumer’s life, and it jumps out for them,” says Ziemer. 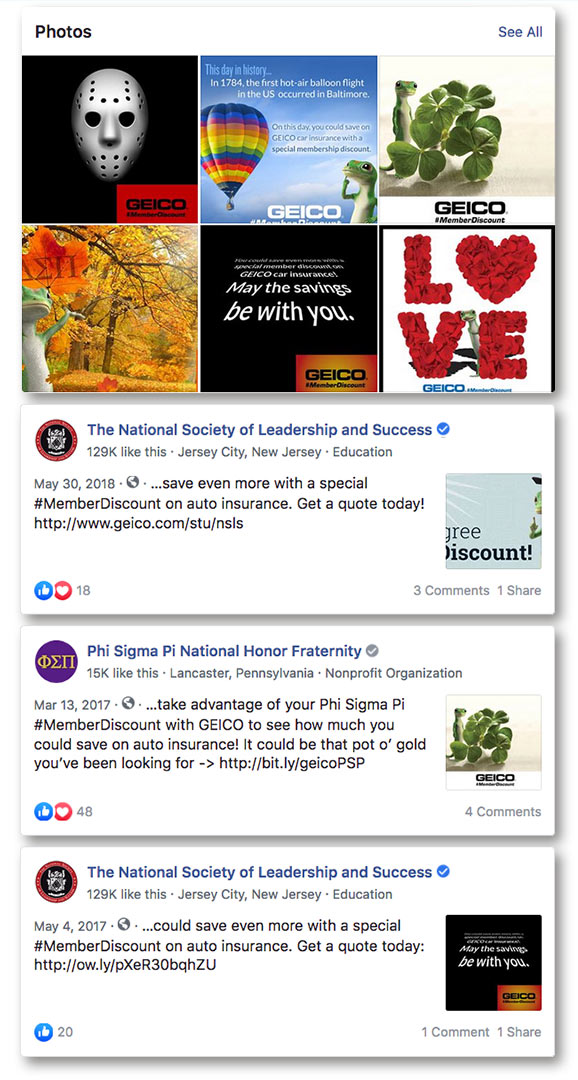 Key advice from Ziemer: “Don’t just appear on a channel because you feel like your brand has to be there.”

Audience is critical to consider. “Different groups of users favor each platform,” says Ziemer, and you have to speak to them each differently.” Generational differences apply too, with Facebook, for example, skewing older, and Instagram, Snapchat and Tik Tok, the relatively new mini video service, skewing younger.

One standout, conspicuous by its absence from her mentions, is Twitter. Ziemer says this platform differs from others because many people visit Twitter multiple times daily, and often take part in running conversations with other users.

“Twitter tends to be more evenly distributed across the different generations than some of the other social media platforms because it’s more about people engaging with members of the sub-communities they’re interested in,” says Ziemer.

A nonfinancial example that Ziemer especially approves of is the completely different ways the National Football League uses the various social platforms. The league uses YouTube and Facebook to build engagement with specific players and events, she explains, while Instagram is set up to allow fans to download themed phone backgrounds, team logos, and other static imagery.

Meeting the Omnichannel Challenge with Subtlety

“One of the things that is key about omnichannel marketing is that it’s really about allowing the consumer to engage with your institution on their terms. The soft sell does a much better job of that,” says Ziemer.

Amassing data about the consumer, and working at understanding it, makes a softer sell work.

Ziemer says the relaunch of the Chase Freedom Unlimited Card is a good example of how to do this right. The campaign’s videos show comedian Kevin Hart in everyday situations talking about all the ways he gets cash back on card purchases — at the supermarket, when he’s buying gasoline and more.

“They feature Hart in a very big bold way,” says Ziemer. But on social media, the brand uses vignettes to show how cashback can support consumers’ lifestyles.

“They have had a few that were workout based. Some were parenting based. Some related to travel, and some related to home cooking,” says Ziemer. “What they’re trying to do overall is build and reinforce the image that Chase Freedom fits into your day-to-day interests. And that the card will support the life you are already trying to lead by offering benefits.”

However, Ziemer adds, other than mentioning the introductory 3% cashback offer, “there wasn’t a huge bold call to action. It was really heavier on imagery and less heavy on words.”

The softer approach is part of the strategy used by Ally Bank, too. Ziemer points out that while Ally is clearly hoping to open accounts, it has established an overall, ongoing theme in its marketing.

“It’s all about how your own bank isn’t treating you right,” says Ziemer. “They are urging consumers to break up with their bank and to come bank with Ally. They do everything they can to position themselves as the disruptor who will take care of you.”

This is the theme challenger banks have also been promoting in their omnichannel efforts and Ziemer says it has driven other, more established banking brands to find ways to broaden their appeal in various channels. Citi, for example, has shifted its creative work toward younger and more whimsical memes, she says. And Wells Fargo is working to appeal to younger consumers with its Greenhouse budgeting app.

“They’re positioning themselves as an institution that is there to support the consumer,” says Ziemer, “instead of leading with the products.”