Connie, a typical consumer, visits a branch to make a routine deposit. While she is waiting in the queue, she remembers she’s been meaning to talk to someone about refinancing her home loan. Connie asks a service associate whom she should see. Instead of making an appointment and forcing Connie to drive cross-town for a second trip, the associate explains that she can sit down and talk to the mortgage rep right now using two-way cameras and TV screens.

You may be asking yourself, “How is this different from video conferencing?”

“OmniSuite provides an experience that is both magical and timely.”
— James Miles,
President/CEO of MidUSA

The 3D OmniSuite technology from Buffalo Pacific and Telepresence Technologies provides high-definition, 3D imaging and video communication with full eye contact, life-size images proportioned to human scale, and theater quality sound. The technology is designed to give users the virtual sensation that a real, live banking advisor is sitting across the desk — as close as possible to the real thing.

The best part? You don’t need any goofy glasses to make this 3D tech work. 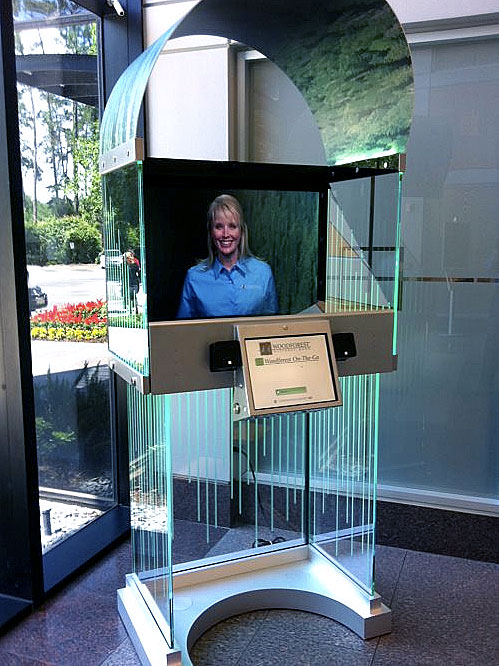 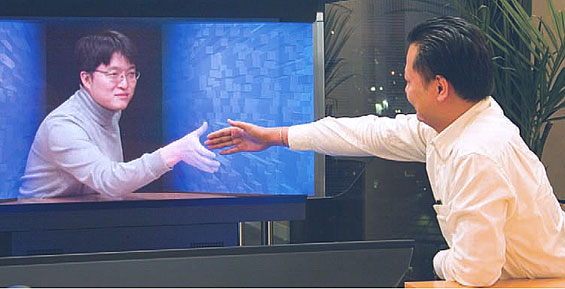 People are going to have to come up with a new formal greeting for video conferencing systems, because a virtual handshake seems kind of silly.

Woodforest National Bank in Woodlands, Texas ($3.9 billion) has already begun experimenting with a kiosk version of the 3D tech. In June this year, MidUSA Credit Union in Ohio became the first credit union in the U.S. to sign up for a test drive of the 3D OmniSuite solution.

A spokesperson for Buffalo Pacific said the company plans to focus on credit unions for the immediate future, but there are plans afoot to offer the service to banks sometime down the road as well. (Interestingly, Buffalo Pacific CEO David Allen is one of MIdUSA’s roughly 18,000 members.)

James Miles, President and CEO of MidUSA, believes the technology will allow his credit union to build and enhance member relations and not simply offload interactions to a technology device.

With only six branches and 54 employees, the $195 million credit union hopes to extend the geographical reach its few expert associates — increasing cross-selling by serving more members at more locations.

“We think this technology is especially exciting for our members who work with our investment and mortgage experts,” Miles continues. “If a member walks into an office and they want to conduct business right then and there rather than schedule an appointment for later, this technology allows them to immediately talk with the MidUSA expert they need.”

“This will allow the investment advisor to have less down time than they would if they were driving during the business day between our six offices to meet customers,” Miles told the CU Times. “We can also use it to conduct mortgage workshops and other educational programs for members.

Miles says the credit union also plans to conduct mortgage workshops and other seminars through its OmniSuite terminals.

While the benefits to OmniSuite are essentially identical to regular video banking, Miles says you have to see the technology in action to fully grasp it’s quality and eye-popping impact. 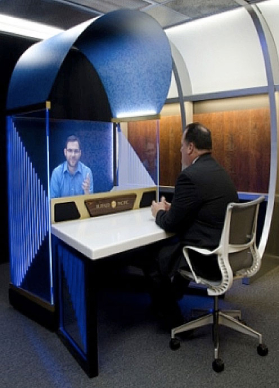 “The real-time 3D video communications experiences which are transmitted through the OmniSuites are of such quality that they appear to be real life and they give the member the feeling of sitting across the desk from our expert staff,” he explains. “It provides an experience that is both magical and timely.”

“Other technologies are good at showing you the person, but a telepresence allows the person to physically be in the room,” according to Allen. “With full-eye contact, trust is developed and soon the consumer feels as if a routine conversation is occurring right across the desk. It’s an experience like no other.”

Is Miles worried about launching the technology, or how his members might react? Apparently not.

“The technology, while advanced and leading edge, is very stable and largely fail-proof,” he told the CU Journal.

Miles expects to deploy the 3D telepresence technology in two locations sometime “over the next several weeks.”

The credit union will be evaluating the performance and ROI of the OmniSuite system from a new account/new relationship perspective.

MidUSA is trumpeting the impending rollout of the OmniSuite technology in a prominent location on the credit union’s website, where already provides a live, text-based chat service for members.

If you’re really curious and want to see an OmniSuite workstation in person, you could visit any of the company’s five live demo locations.