Subscribe Now Get The Financial Brand's FREE Email Newsletter
You can't plan serendipity, but you can embrace it. Case in point: The story of how OneUnited Bank — the largest Black bank in the U.S. — created a small-dollar loan option for Covid-impacted customers, which led to the bank starring in the first segment of a new docuseries aired on CNBC.

OneUnited is the largest Black-owned bank in the United States — a distinction that carries a lot of weight. Headquartered in Boston, the bank has six branches, but has customers all over the country.

In a bit of marketing happenstance, OneUnited caught the attention of Salesforce as it was planning content for its new docuseries ‘The Shift’ to air on CNBC. The series is designed to showcase how various companies survived the pandemic by incorporating digital transformation. 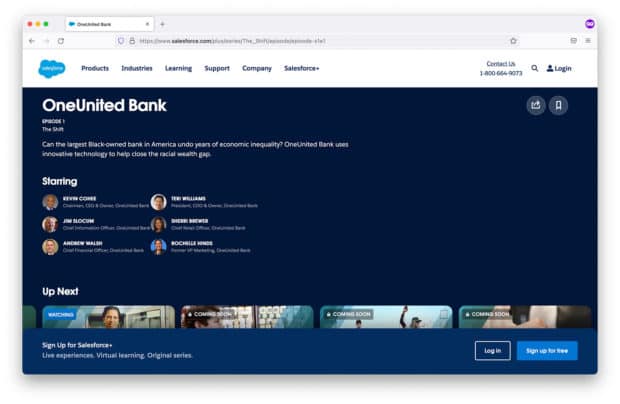 The series producers felt OneUnited had a strong enough story to be the inaugural episode of the new series. The initial inspiration for the first episode of the docuseries came from a new product: OneUnited’s CashPlease service.

The banks with the most success during and following the Covid-19 pandemic were the ones who acknowledged and helped alleviate the formidable problems facing banking customers. OneUnited Bank, as depicted in the docuseries, recognized one painful gap in banking that needed addressing: “predatory payday loans.” CashPlease was developed soon after.

But, the 23-minute feature on Cohee’s bank went farther than that — it also dove into the history of the racial wealth gap in the United States, and the dynamics of “Black banking.”

The episode is a promotion, in many ways, for Salesforce’s products. However, the exposure for OneUnited — a marketing coup that came knocking unexpectedly — was significant.

Building A Solution to the Broken ‘Payday Loan’ System

Payday lenders can charge rates in the 400% range, according to the docuseries, making it difficult for low-income families to pay off even small loans. Teri Williams, President of OneUnited, says few banks want to compete by offering competitive products, primarily because the chances of making a profit from lower interest rates are slim.

To make matters worse, payday lenders often only report when a customer hasn’t made a monthly payment, as Williams explains in the episode. If an individual is paying down a payday loan, they’ll likely never see it reflected on their credit report.

Even Williams and her team debated whether they could break even by offering an alternative small-dollar loan to customers struggling to make ends meet.

Many low-income customers need access to quick cash, and turn to payday loans. But with the high interest rates, the customers struggle to pay them off.

“Salesforce asked us if they could follow us around as we were developing this program and we agreed without really knowing what the end goal was going to be,” says Williams. The vendor’s camera crew followed the bank’s team around off and on for six months to capture the institution’s culture in true form.

Since then, the bank has realized the value of spreading word about not only the OneUnited brand, but also educating the public about Black banks as a collective.

The racial wealth gap is a strong focal point for the bank, and Williams emphasizes that can’t be changed by a single bank. It will take corporations and other large organizations with influence to create real, equitable change.

The Impact of George Floyd on OneUnited Bank

After Cohee’s opening shot in the episode, the perspective shifts to video footage of protests following the murder of George Floyd in 2020 in Minneapolis.

The event was a turning point in many ways, and a critical moment in OneUnited’s story. Shortly after news spread of Floyd’s death, celebrities and influencers advocated people move their bank accounts to Black-owned financial institutions. The movement — and the new catchphrase ‘Bank Black’ — spread like wildfire, and quickly stimulated massive growth for Black-owned banks across the country.

No good story lacks struggle. The docuseries doesn’t just highlight the bank’s successes, or its strong points. It also showcases the lash-back the bank received when its own growth became unsustainable.

For instance, customers flocked to the bank following the movement, but its call centers weren’t equipped to handle the overflow.

“The abandonment rate in our call center was as high as 15%,” Williams explains in the episode. Screenshots of bad reviews flash across the screen. 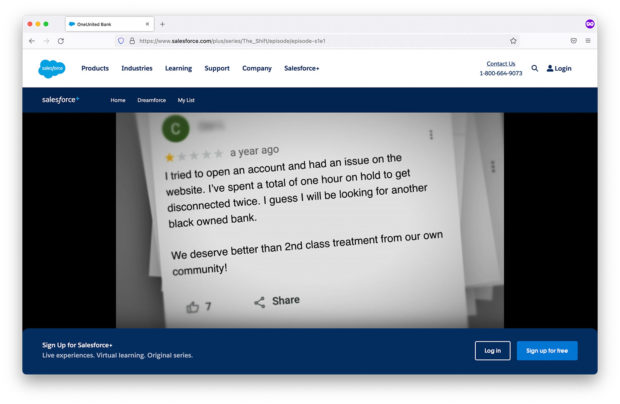 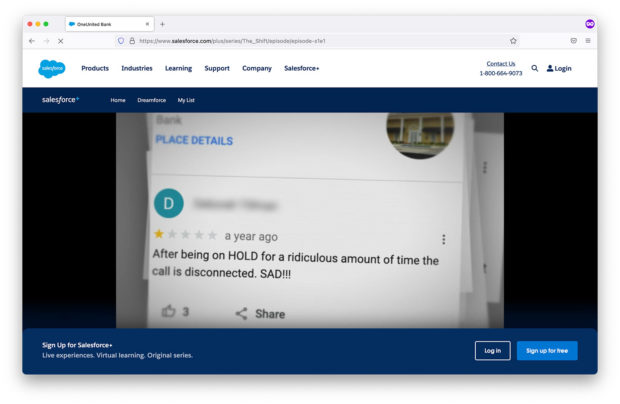 Williams says most banks would want to sweep sour moments like these under the rug, and remove them from the public eye. She argues OneUnited is different, that it thrives on feedback — good or bad.

“That’s what tells us what’s going on, and what we need to fix and how we need to improve,” says Williams. “For us, it’s a great feedback loop. And we don’t consider them to be complaints.”

The solution was a quick digital fix, suggested and implemented by Salesforce, that reduced their call abandonment rate to 1%.

The docuseries is a blend of educational and emotional. Williams explains the focus of OneUnited is to be authentically Black — not just a bank which happens to have Black owners.

It is sponsored content, of course. On several occasions, members of the bank’s executive team reiterate that they “couldn’t have done it without Salesforce.”

Yet the bank’s culture and purpose still shine through.

Listen In: The Irresistible Power of Strategic Storytelling

“I have to say, when I watched it, I was like ‘Wow, they really did capture who we are.’ And that was fun to see,” Williams says, joking that it is ‘inherently awkward’ to be the one in front of the camera. None of it was scripted, she says, which added layers of spontaneity and authenticity to the story.

To balance out the content about the partnership between Salesforce and OneUnited, the emphasis on Black history and the bank’s new small-loan product, the docuseries also included customer perspectives.

“Storytelling is an outgrowth of authenticity,” Williams says. “We started to hear stories from our customers, because as they started to understand who we are in our journey both as individuals as well as an institution, they started to tell their stories.”