The balance of sales between branches and digital channels isn’t necessarily a zero-sum game. Not at Citibank anyway.

At the same time, as more transactions have shifted to digital channels, this has changed how consumers use Citi branches and how the bank organizes its branch staff, according to Mercaldo. She noted that some sales have shifted to suburban locations from urban ones, reflecting widespread working from home.

“But it’s still to be determined what the long haul’s going to be,” says Mercaldo, as many companies are still figuring out how to address post-Covid work. She notes as an example that the bank’s customers have been returning to Midtown Manhattan in New York City and this has caused a spike in deposit sales in those branches.

Mercaldo, who has more than 30 years of retail banking experience, a decade of it with Citi, was interviewed by Jim Marous, Co-Publisher of The Financial Brand and CEO of the Digital Banking Report, for a Banking Transformed podcast.

Branch Versus Digital? Less a Rivalry, More an Evolution

Marous, who noted that he started out as a branch banker, suggested that branch staff must see digital channels as an enemy, grabbing their volume over time. Mercaldo says this isn’t the case, as increasing use of digital has enhanced the roles for humans in branches while reducing rote transactions.

Citi for some years now has pursued a different approach to branching than the other megabanks.

While JPMorgan Chase, Bank of America and Wells have thousands of branches across the country, Citi’s network consists of 687 branches, as of the first quarter 2021.

These are centered on six key U.S. cities and much of the bank’s cross selling focuses on its extensive credit card customer base.

Branch Strategy Ahead of Its Time:

In a sense, Mercaldo suggests, Citi was ahead of the curve in forming a trim branch network.

“We think we’re well positioned in the cities where we have a physical environment, especially as consumers lean into digital for routine transactions and interactions,” she explains. “We think they’re shifting away from the need to have a branch on every street corner.” Mobile deposit usage grew during the pandemic, she says, and that growth has stuck. At present mobile deposits account for 41% of checks deposited in Citi’s U.S. system.

However, she continues, this change makes use of branches a “want,” rather than a “need.”

“It’s something they want when they seek advice and guidance,” says Mercaldo.

“We will always be looking at ways to optimize our footprint,” says Mercaldo. “We want to make sure that we’re renovating branches, that we’re relocating them as appropriate into high-opportunity markets. And at times we’ll close them and open new ones.”

In a June 2021 analyst meeting, Citi’s CEO Jane Fraser said some growth in the U.S. footprint might even be in the offing. “I don’t believe the branches are dead yet,” she said. Fraser also suggested that as some in-branch services migrate to digital channels, some might also become embedded with card partners like American Airlines and Home Depot. She emphasized that building full-relationships, not just product relationships, is a priority for Citi.

“As transactions have migrated to digital, we’ve changed the way we think about roles in the branches,” says Mercaldo.

It’s Not All About Tech:

Consumers arriving at branches want to be greeted by humans — that’s why they are going to the branch, after all, to deal with people.

This led to creation of a concierge job in Citi branches, which represented a step up for tellers whose services were less necessary. While Mercaldo didn’t use the term “universal banker,” much of what the job entails fits that label. Concierges greet, direct, help with certain inquiries and introduce the customer to specialists when necessary. They can also handle transactions and open accounts as needed.

Customers seem to like this approach. Where it’s been adopted in the Citi system sales and referrals are three times as productive as in locations without them, according to Mercaldo. These branches also produce higher Net Promoter Scores.

Because the emphasis is now on advice and education, this has led to increased staffing in such offices. Mercaldo notes that the lowest volume of branch visits were in April 2020, and that as protections were put in place, traffic steadily grew from that low.

Getting to Know Pets, Kids and Customer Needs Via Video

During the pandemic Citi began using video chat, via Zoom, to give consumers who couldn’t or preferred not to visit branches the opportunity to still connect with branch bankers that they knew.

“In the end, we are all social beings, we like to connect with other humans and banking is an emotive event, especially for the big decisions in someone’s financial life,” says Mercaldo. “We basically began bringing the human touch to clients through high-tech interaction.” 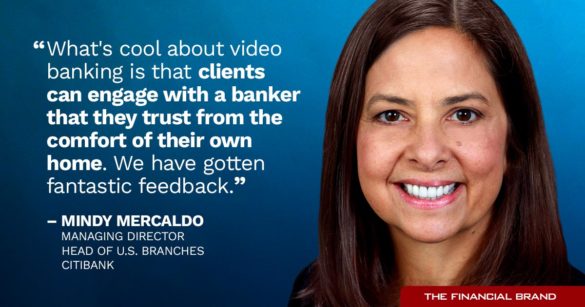 “What’s cool about video banking is that clients can engage with a banker that they trust from the comfort of their own home,” says Mercaldo. “We have gotten fantastic feedback. People love meeting with the banker that they already have a relationship with.

Mercaldo adds that the technology is helping to maintain connections with consumers who have moved to other cities who still want to do business with the bank. “We are providing a face-to-face way to bank with us that’s virtual,” says Mercaldo.

On the flip side, the bankers “have met kids, significant others and even pets.”

Building Bases Beyond Branches — and Playing into Google Plex

During the podcast Mercaldo also spoke of the value of the bank’s 60,000 fee-free ATMs, which also come under her direction. These provide a means for consumers beyond the six branching cities to maintain or establish a relationship with Citi.

This might seem to be a wasting asset, given the cashless trend, but Mercaldo called that viewpoint into doubt. “As communities open up, we have been seeing clients return to ATMs,” she says. In the most recent reporting period at the time of the podcast, ATM withdrawals had returned to pre-pandemic levels.

Marous asked Mercaldo about the pending launch of Google Plex accounts by Google and a small group of financial institutions, with Citi as the largest of the bunch. At first, he suggested, it would seem the digital transaction and savings account would work against a physical network. But then it hit him that for branch-light Citi, “this is an expansion play.”

Mercaldo confirmed that. “Ours is a digital-led strategy,” she says, “with a physical footprint that brings the human experience to clients, both in a branch and through digital tools, like video and Google Plex.”