Subscribe Now Get The Financial Brand's FREE Email Newsletter
Coastal Community Bank, a leading banking as a service provider that works with Greenwood, Bluevine and Walmart's ONE, has introduced its own take on an interactive 3D financial world where consumers can play and sample fintech and neobank offerings. And that's just for starters.

Coastal Community Bank, a pioneer among banking as a service providers, is forging ahead with the beginnings of a digital ecosystem that engages consumers with an experience similar to the Metaverse while tying together its BaaS partners with its own presence there. Management envisions adding more partner companies to the virtual world and expanding into financial education and eventually into live transactions.

In October 2022 Coastal had a soft launch of its “Coastal World,” an immersive 3D website that promotes 11 fintechs and neobanks that use the $2.9 million-assets institution’s services. Management expects to fully launch the site in January 2023. Coastal World is already drawing over 600 unique daily visitors daily for an average stay of over seven minutes. That’s even though there’s been no promotion to speak of.

Welcome to My World:

Coastal World is a blend of fun and financial business. Presently it consists of a three-island virtual archipelago where visitors can play, interact with island dwellers, and visit pavilions for the brands that have planted their flags so far.

“There’s a whole generation that has a lot of experience playing games,” says Laura Byers, chief digital banking officer at Coastal Community. She says experiences like Coastal World are “the next stop for the internet.” Byers adds that while the prime target is people aged 20-40, older people may also become interested. She says research indicates people in their 50s like digital games like FarmVille.

A New Way to Build a Community for Banking

Some community banks have established national brand divisions, often under completely different names, to tap deposits from a broader piece of the country or to expand a specialized lending niche. Coastal Community Bank’s effort goes in a different direction — creating its own “country.”

Coastal World represents a virtual expansion of the bank’s territory that has significant real-world potential. Legacy Coastal Community serves about 350,000 households in Washington State. The Coastal World universe is far larger. It consists of the total of all of the customers of the fintechs currently participating in the virtual world — approximately 5 million households, according to Curt Queyrouze, president of the bank.

As the bank develops a functioning financial ecosystem in the marketing and play space that Coastal World is now, that would represent a 15-fold increase in potential customers.

Queyrouze points out that as the online world develops more interoperability among participants it will expand the range of services the bank’s customers can avail themselves of through the fintech and neobank partners.

This puts a new twist on banking as a service. Not just renting access and capability, but becoming a sort of cooperative venture.

Queyrouze says he’s long been excited about the possibilities of banking ecosystems.

“I wondered how you could make it work,” he says. Coastal World is the beginning of that.

Life Inside Coastal World and Its Three Islands

Coastal Community has 19 active BaaS partners and seven more in various stages leading up to activation, as of September 2022 financial reports. Byers says the 11 companies on Coastal World’s three islands — Lake, Cove and Wild — are the early adopters among current BaaS partners.

Visitors begin by being welcomed aboard a boat with a skipper who asks them what financial needs they are especially interested in hearing more about. The boat drops them on the appropriate island of Coastal World and they begin interacting with the island dwellers.

Some inhabitants stroll along and will engage in conversation if approached, often offering tips, tricks and secrets. The latter includes where to find treasure — gold coins visitors can accumulate towards in-game equipment and special clothing, like rocket boots — or what activities to try out. Some invite visitors to compete in events like bicycle, car and boat races against the clock, that are tougher than they sound. (Occasionally there is also a red herring.) 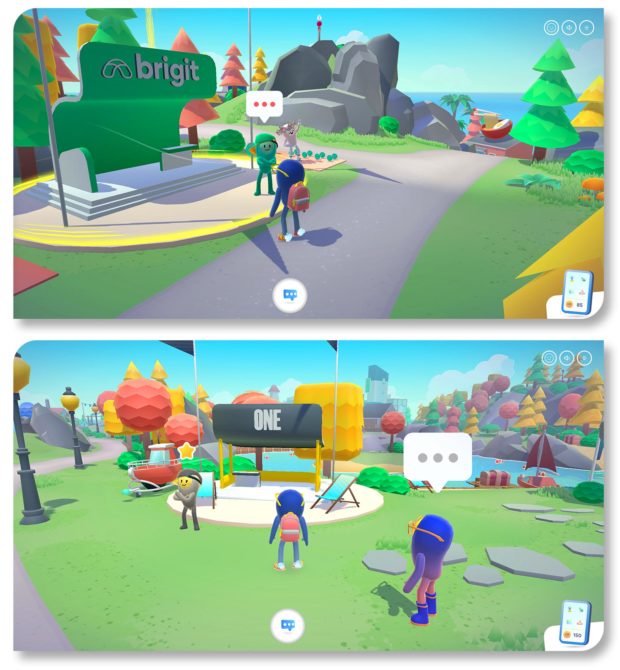 Other residents are based at pavilions for Coastal and the participating BaaS clients. Many of the pavilions have two game-based attendants.

One attendant may give tips or special tools that will help the visitor complete missions. One example is a watering can for sprinkling saplings to turn them into trees, on behalf of Aspiration, a fintech dedicated to ecological causes. Another is healing sick game characters with a stethoscope, courtesy of Zenda, a fintech that assists with health savings accounts. In a third case, visitors use a hammer from home equity specialist Aven to fix multiple houses on the islands that need repair.

The other attendant at each pavilion is there to talk about what the fintech can do for the interested consumer.

If a visitor wants to know more about the company, a “yes” to the attendant activates the player’s in-game mobile device. This displays information about the provider. Sometimes the displays, typically long enough to include a scroll feature, include a short video explaining the company’s accounts or service. 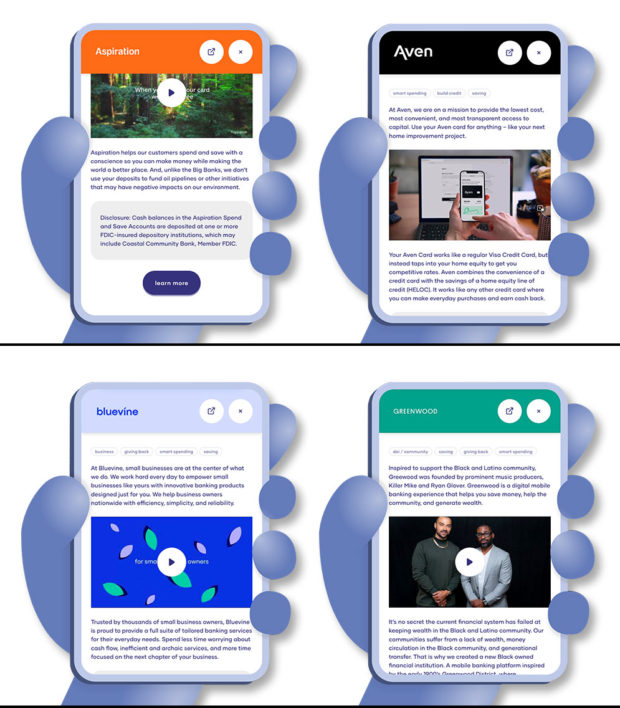 The mobile device also offers a scrolling map of the entire archipelago, complete with logos that enable quick travel to those locations by boat or taxi when clicked on. The devices also track missions completed and gold coins earned for doing so. Another screen shows a roster of all participating companies with capsule descriptions and links.

Read More: How Real Is the Metaverse and Web 3.0 for Banking?

Coastal World is actually a cool game to play and the controls, navigation and speed are better than a comparable experience in Decentraland, one of the actual Metaverse communities.

Byers says building an interface that’s attractive to younger people is critical, because “traditional customers are aging out.”

“Coastal World has the potential for creating engagement that is different,” says Queyrouze. He points out that the customer can engage with the bank using multiple senses at a time, versus using an IVR (interactive voice response) interface. He foresees a point where providers will be able to host meetings between live representatives and customers or prospects in the firms’ pavilions.

Byers says that Coastal World’s system, designed by Merci-Michel of France, has the capability of hosting seminars and other meetings. This could facilitate group activities.

Queyrouze notes that his pre-teen sons are not in the market for financial services but that they’ve made multiple visits to Coastal World and are racking up points. They are quite used to playing Roblox, Minecraft and other modern digital games and have been enjoying the bank’s take on this idea.

Byers suggests that the cross-pollination of working with fintechs and neobanks in the virtual space will help Coastal learn more about new customers and prospects.

What Lies Beneath: The Tech of Coastal World

As impressive as the work is that Merci-Michel has put in on art direction, user experience and user interface, part of the future direction of this virtual world will hinge on banking technology, according to Queyrouze and Byers.

Byers says that Coastal Community is in the midst of developing a data lake that will enable it to improve features like fraud protection across its entire BaaS clientele. This will be essential to enabling companies to fully take part in Coastal World as it becomes a deeper financial ecosystem. As a BaaS provider a selling point for Coastal Community is that it is “core agnostic.” That is, it will work with whatever processing approach the client companies choose. New players get an intensive vetting before the bank takes them on, as well.

Facilitating financial interoperability among the companies living in Coastal World, from know-your-customer compliance to payments, will likely hinge on some form of tokenization, says Queyrouze. The concept is that once someone is approved to be in the system, their data is secure and secret. Should the need to know the information within the token arise, the recipient would ping the bank, which would make secure and confidential contact outside of the system.

Queyrouze says in time blockchain technology could be incorporated into Coastal World to provide a protected method for payments.

Thinking like this is part of the impetus for the bank to develop its own BaaS community — fintech and neobank participants don’t pay anything to take part — rather than join a Metaverse provider.

There’s no control when you join someone else’s system, says Queyrouze, and it’s generally expensive. He points out that Coastal is already spending a good deal on risk management in its BaaS activities. The bank has a dedicated staff of 100 people handling risk.

The next big step will be incorporating financial education into the mix, according to Byers.

Queyrouze says he has been involved in traditional financial literacy training at Coastal and other institutions. He says a better way must be found.

“You can see that it is still not sinking in,” he says. He hopes Coastal World can change that.