Subscribe Now Get The Financial Brand's FREE Email Newsletter
Financial marketers are struggling with promoting digitization. Two thirds have average or below scores for digital marketing strategies, according to Gartner research. Fintechs have their own challenges, but they pick their battles and their narrower focus gives them an edge. A wrinkle is financial institutions' competition for Google traffic with comparison sites like NerdWallet.

Fintechs and other challenger brands have been outdistancing many traditional financial institutions in key aspects of digital marketing efforts, according to a Gartner financial marketing study. The research also finds that financial comparison shopping sites like NerdWallet, Credit Karma and Points Guy have been grabbing more attention in Google search than financial institutions’ own sites, cutting many brands off from some potential sales opportunities.

Fintechs tend to use a stickier approach to promotion, particularly in mobile channels. For example, they often require consumers to download their app before proceeding beyond step one. Whereas traditional providers, says Gartner, often miss very obvious places to give consumers connections for enrolling in their services.

In the area of search, the report states, “comparison websites receive a high volume of traffic from search, siphoning organic nonbranded keyword results away from retail banks.”

One area where brands with branches are doing well is investing in branch locators, as well as ATM locators. The report notes that this caters well to younger consumers who still like having a physical location to go to. Gartner pointed out that traditional institutions’ efforts to rethink branch formats have helped make them more appealing to newer generations, even though they have taken to apps.

How the ‘Genius’ Institutions Got that Way

Gartner’s research, the Digital IQ Index: Retail Banking, U.S. 2019, is a first for the firm and evaluates both traditional financial institutions and fintech firms as well as the comparison sites.

80 brands were evaluated, including national and regional financial institutions, online-only banks, and fintechs, including both larger and smaller ones. Overall, the researchers looked at deposit accounts, credit cards and personal loans.

Only three institutions’ total scores qualified them as Geniuses: Bank of America, Wells Fargo and Chase. 22 companies were ranked one notch lower, as Gifted. But the remaining firms, 69% of the sample, didn’t do so well. 21 came in as Average, 25 as Challenged, and 9 as Feeble, in the terms selected by Gartner.

A few highlights from Gartner’s explanations for the Genius-level rankings include the following.

1. Bank of America got high marks for site experience, especially for emphasizing mobile app download via a pop-up and including promos across the three product categories the study evaluated. BofA topped organic search visibility among all 80 companies. It had the most interactions on LinkedIn and was in the top 10 in Facebook, Twitter, and Instagram interactions. In the area of digital commerce, BofA scored for features such as live chat availability during online enrollment.

2. Wells Fargo topped all companies in the firm’s index for YouTube subscribers, at 280,000 — three times the closest rival. The bank also came in second in the group for customer service tweets. In digital marketing, a significant win was having the highest total for opened customer emails. Site experience pluses included offering search results that consumers could filter as they chose.

3. JPMorgan Chase rang the bell for site experience. “Navigation is among the most comprehensive in the Index,” the report states, “with search, language toggle, branch locator, content hub and customer service links.” Chase was the group’s leader on Instagram, with the most followers and net new followers. In addition, Chase had the second-highest level of mobile app downloads and the highest level of five-star app ratings among the companies studied.

The report doesn’t provide details on most of the Gifted, but gave specifics on the top two. Among PNC’s attributes: “Content hub is among the most comprehensive in the Index.” Capital One earned kudos as “the top Index performer for mobile apps and voice.”

Improving traditional institutions’ competitive ability versus fintechs’ requires making further investments in the mobile channel, including creating easier ways for interested consumers to move from inquiry to signup. Financial institutions on the whole also have to work harder at including “calls to action” on their digital channels, according to the report.

Where Fintechs Have Gained Their Edge

One important distinction made by the research is that fintechs generally enjoy a very narrow product line. In a sense traditional institutions, especially commercial banks, are like department or warehouse stores, with much to promote and sell. Fintechs resemble specialty stores that can concentrate and tailor because what they do is basically all they do. Yet traditional organizations can learn from this difference.

Being much more specialized, and not taking on as many forms of digital marketing, many fintechs placed in the lower categories based on their overall scores, but did very well at what they tackle.

“Fintech brands disrupted the existing business model by focusing their efforts on select strategies like driving app downloads, rather than website conversion,” the report says. “Challengers have perfected the art of using their mobile apps for more than just servicing customers. Fintechs are ‘download first, enroll second,’ and 47% don’t even allow account signup on mobile sites without first downloading the app.”

A strength shared by fintechs and online financial institutions is their stress on mobile app download calls to action, as demonstrated in the chart below. 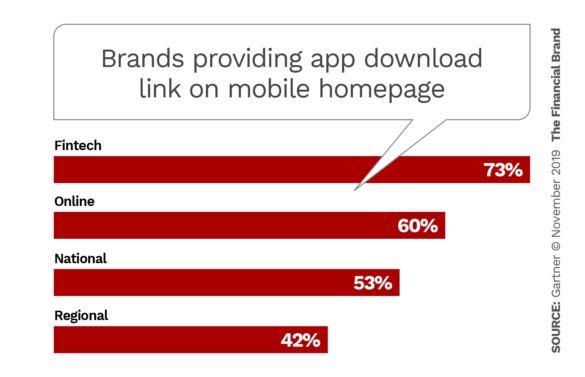 The message here, according to Chris Bendtsen, Principal in the Gartner for Marketers Practice, is that “to thrive in a mobile-first environment, traditional retail banks should think about expanding their mobile app product roadmaps to include prospecting capabilities and test a variety of tactics for promoting mobile app downloads to defend against challenger disruption.”

Over the entire study, the report points out, brands with active app promotions earn four times the downloads as brands that don’t work at this.

Gartner’s 4 tips for getting mobile-app signups

“By brand category, fintechs and online banks are the clear winners for growth,” the study says. “When comparing two six-month periods, challenger brands produced a 1.8 million iOS app download increase versus a decrease of 836,000 for national and regional banks.” Challenger brands have also been experiencing much higher growth in active use of downloaded apps, according to the research.

And that underscores an important ongoing requirement, according to Bendtsen: Fintechs and online banks build their apps to be fan favorites.

“People love those experiences,” says Bendtsen. “Those companies are doing something right with their apps.”

A wide range of sites exist to help consumers pick and choose among the multitude of financial services offerings, especially in the three areas Gartner studied — deposits, credit cards, and personal lending. Something that sets today’s consumer advice sites apart from classic sources such as Consumer Reports magazine recommendations and rankings is that it is common for today’s sites to receive fees from financial providers whose products are sold as a result of one of their listings. (Typically this relationship is disclosed.)

But what this means is that those comparison sites have business models that make them competitors with even the brands they take commissions from, in a sense. To get the traffic they need to their sites, they have to work Google’s algorithms just as much as the brands they evaluate.

And they are winning.

The study found that less than 20% of site traffic on the public-facing websites of brands in the research comes from search. For national, regional, and online banks, over three-quarters of traffic comes from visitors who specifically went to those sites. The study surmises that these are likely consumers with existing relationships.

“Banks lose out on prospect ‘foot traffic’,” according to the report, “due to a low share of first-page search results for nonbranded key words.” The chart below shows how heavily comparison sites and publishers of financial information dominate organic search, and their strong performance in paid search. 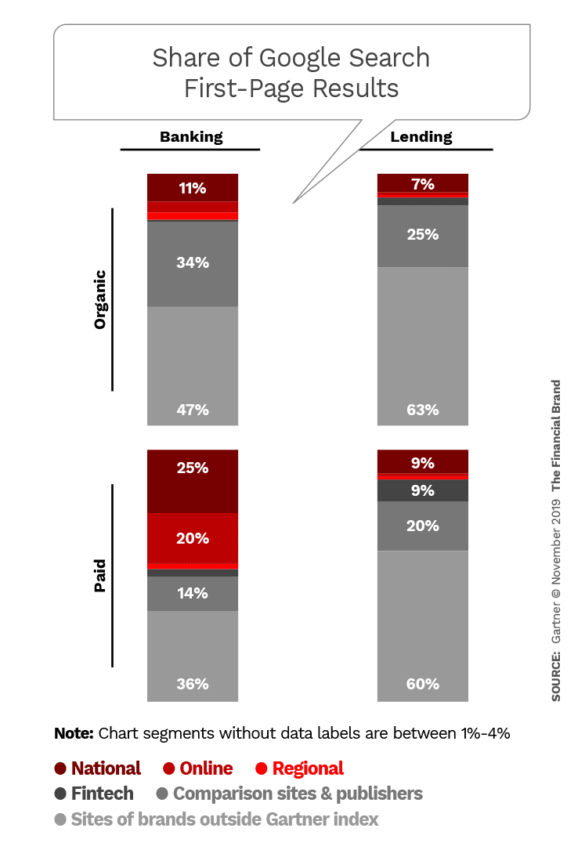 What holds back financial institutions paid search results is their choices, the study suggests.

“A disconnect exists between the keywords that banks bid on and what people search for,” the report says. Many buy deposit-related search terms, rather than terms related to lending, which consumers search for more frequently, according to Gartner.

The study indicates that the brands that have adapted the best to the first-page challenge are those that reason “if you can’t beat them, pay them.”

The report singles out Citibank and Capital One as especially adept at this strategy. By sponsoring product listings on banking and credit card comparison sites, the report says, they tend to dominate them.

Gartner recommends that financial marketers allocate an appropriate chunk of their marketing budgets for promotions on comparison sites that offer high traffic or conversion as well as a good fit with their institutions’ products.