Subscribe Now Get The Financial Brand's FREE Email Newsletter
Consumers increasingly use online and mobile apps to pay bills but are often stymied by an over-complicated, opaque user experience. Banks and credit unions have a chance to regain ground lost to billers and fintechs, but only if they upgrade their bill-pay experience to be more seamless.

Banks pioneered the online bill payment business as a way to end the drudgery of monthly check writing for consumers, and reduce check volume as a side benefit.

It was highly successful for a time, yet the industry didn’t follow up on its advantage and instead let bill pay stagnate. Gradually biller-direct payments surpassed the bill payments sent via bank programs.

By some estimates, banks’ share of market slipped from over 50% to the mid-to-upper 20% range.

Paying bills directly on a biller’s website often offers more payment choices, automation, and clarity of information surrounding the bill pay process, notes Mercator Advisory Group. “While banks do recognize that bill pay both drives institutional loyalty and is critical to consumers’ financial wellbeing, they are missing opportunities to make it a more central part of their interactions with customers,” Mercator says in a report. 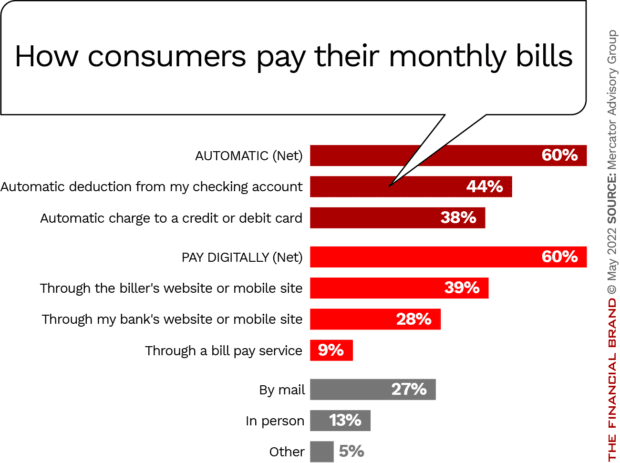 The irony is that banking industry has advanced greatly in other areas of payments including P2P and real-time payments. Adding to the enigma of why banks have neglected bill pay is that three-quarters of consumers report they would like to have a single platform from which they can pay all their bills at once, as Dan Holt, chief executive officer of bill pay solutions provider BillGO told PYMNTS.com.

Confusing online payment functionality is actually a contributing factor to a rise in the number of missed and late payments, according to data from a survey of consumers by PayNearMe.

“Nearly one in five adults surveyed (19%) say they paid a bill late because the online bill pay process was so complicated they became frustrated and didn’t complete the payment,” says Anne Hay, head of PayNearMe’s consumer research initiative. It was the top reason for late payments across all age groups. This was followed by: “I overlooked my bill in my email”; “I simply procrastinated or forgot” and “All my bills have different due dates, and I’m not sure which bills are due when.”

With increasing reliance on online/mobile payments, banks and credit unions need to create a frictionless payment experience, which, for many consumers, means having the ability to pay their bills via a mobile device.

Statistics from the Federal Reserve Bank of Atlanta indicate that mobile/online bill payments are gaining traction by consumers. 46% of consumers made at least one mobile payment in the 12 months ending October 2020, up from 38% in October 2019.

To be sure, hard economic realities also figure into late or missed payments. Each year U.S. households spend more than $4.6 trillion on recurring bill payments, says doxo, a bill pay provider. In a 2021 report it quantifies household bill trends:

The pandemic also significantly altered bill payment behavior. According to doxo, 52% of households paid more bills online because of Covid. 40% of bill payers delayed paying at least one household bill during the pandemic and, of those that delayed bill payments, the most common delayed bill was utilities. In addition, the company found that 89% of consumers said they had seen their household bills increase as a result of rising inflation.

What Banks Can Do to Catch Up on Bill Pay

Aside from economic forces out of their control, banks and credit unions can do some relatively simple things to improve their bill pay offerings. According to the PayNearMe survey, 45% of U.S. adults say receiving a text message or email reminding them when a bill is due would make on-time bill payment easier. And 38% say that a reminder including a clickable payment link would be even more convenient.

Present multiple bills in one tidy list along with due dates, log-ins and payment options.

Email reminders were also the most popular response among participants in a survey from doxo, when it asked how they wanted to improve their bill pay experience. The responses to the doxo survey are depicted in the chart below. 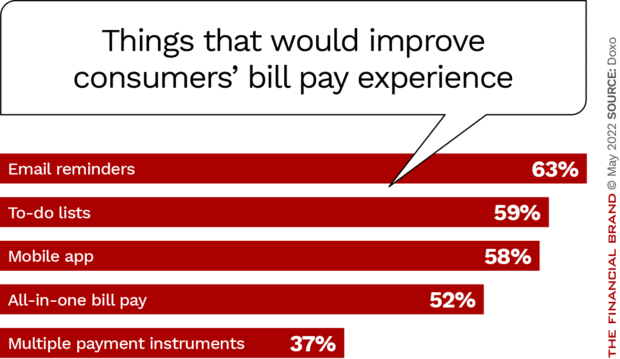 Mastercard debuted a solution that it says addresses the issues of inconsistency, cost, transparency and simplicity related to consumer bill pay. It’s called Mastercard Bill Pay Exchange, and has these features:

A company called CSG is using the Mastercard product to power a bill management solution for banks and credit unions. “Companies must make it easy for consumers to take charge of everyday responsibilities, like budgeting and paying bills on time,” said Eric Carrasquilla, SVP, digital engagement solutions, CSG.

BillGO’s Dan Holt says banks and credit unions still have an advantage when it comes to keeping the bill pay relationship: Most consumers still have their paychecks deposited at banks. But banks have to leverage that advantage and Holt says he has seen few moves “in mainstream banking to make the bill pay experience cleaner, faster, more digital or more advantageous for consumers.”

A crucial improvement, he points out, would be to make the whole process more transparent as to what’s happening and when, so the consumer has more certainty. People who are used to P2P or paying on Amazon expect that now.

Equally important is for banks and credit unions to use data analytics to enhance their bill pay offerings. As Holt observed, this kind of data intelligence includes understanding the trend of a consumer’s bills so that the institution can advise the consumer in advance that they will be late on a payment if they don’t act promptly.

Another facet of bill pay where traditional institutions have an edge is in security. When doxo asked consumers about their bill pay concerns, the fear with the biggest increase was identity fraud. 38% of surveyed households were more concerned about it in 2022 than they were the previous year. Other mounting concerns were stolen payment information (up 35%), and the impact to their credit score (up 31%). 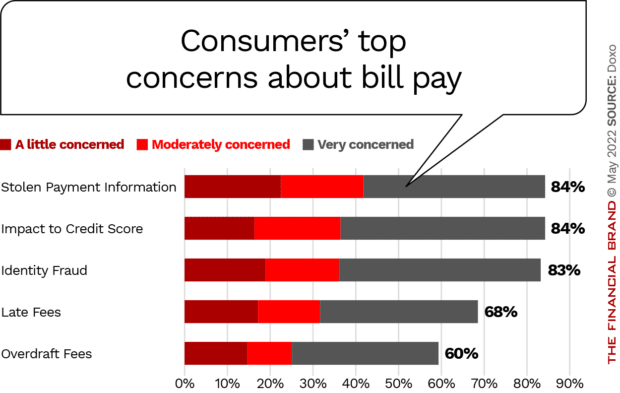 The firm also sees artificial intelligence and machine learning technologies making advances in online security. For example, once a bank analyzes patterns in a consumer’s account, such technology can uncover anomalies that could indicate fraud. The financial institution could then almost instantaneously send a text message to the consumer asking if a particular transaction was legitimate.