Subscribe Now Get The Financial Brand Newsletter for FREE - Sign Up Now
Will Gen Z even know what an antenna is? Connected TVs that bring the web to big screens, increasing digital audio options that are outpacing traditional radio, and podcasts all offer bank and credit union marketers new places to reach consumers. As tolerance for ad-free subscription services levels off, fresh opportunities are opening up.

Americans seem to find more and more ways to be connected to entertainment and information delivered in a continuous flow they can turn on any time, from mobile devices to new ways of accessing programming through TV sets. And as they explore new channels, financial marketers must keep up with new ways of reaching them through those technologies — especially as older channels fade.

Even on streaming services that don’t carry obvious advertising, there may be opportunities for product placement, but that would seem to count out banks and credit unions. A branded box of corn flakes served during a breakfast scene might do something for a cereal company, but what would a bank show? A credit card bill (bad news)? A branch (not leading edge)? An ATM (ditto)?

So other opportunities must be explored. This report looks at developments in three digital areas: connected TV, digital audio, and podcasts.

Where Does TV End and the Web Begin?

The growth of streaming services continues, along with both beloved vintage programming and new content to boost subscriptions to advertising-free platforms like Disney+ and Apple TV+. More are expected in 2020.

That said, there’s an upper limit to how much many American consumers will pay for streaming subscriptions, Emily Groch notes in a report for Comperemedia, a Mintel Company.

Groch, Director of Insights, Telecommunications, says that 81% of Americans subscribe to one to three streaming video services. (Of those, more subscribe to just two.) And the firm’s research indicates that if these consumers want to add a new service, they will cancel something else.

This is on top of the continuing trend of cord-cutting. The firm reports that almost half of U.S. households are considering cutting their pay TV service to save money.

This contributes to the appeal of an alternative to ad-free digital video on demand. Groch reports that 30% of U.S. digital video subscribers would prefer a free ad-supported service to an ad-free subscription service. Comperemedia believes such options will become more common in 2020 and will be provided by more players — possibly twice as many as currently exist. 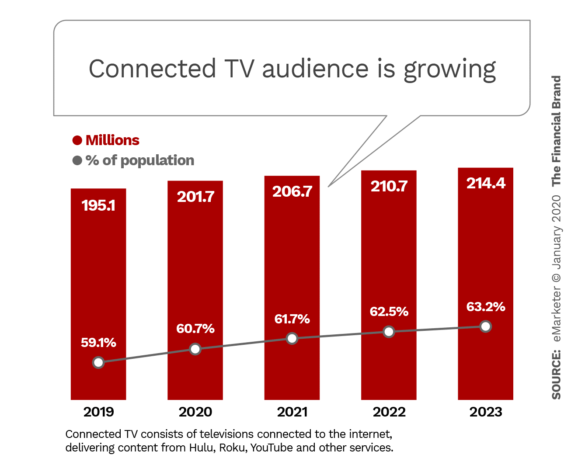 Many of these services can be delivered via connected TVs, including such services as Roku, Hulu, and YouTube, the three leaders, as well as others including Tubi TV, Crackle, and Amazon-owned IMDB TV. These TVs are connected to the internet, and there are more and more of them out there. eMarketer projects that by 2023 Americans will own 214.4 million connected TVs — a huge potential advertising base. 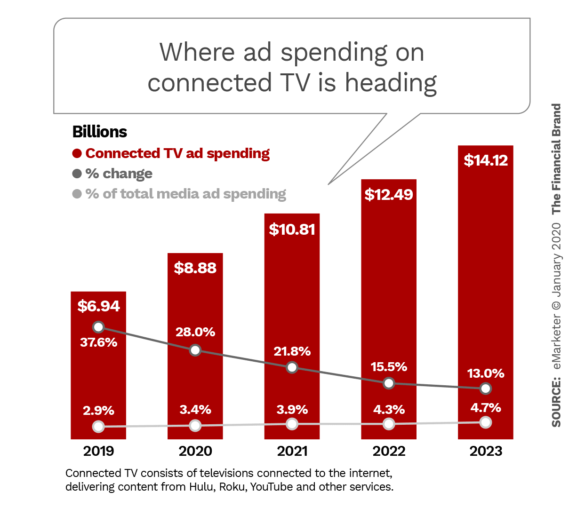 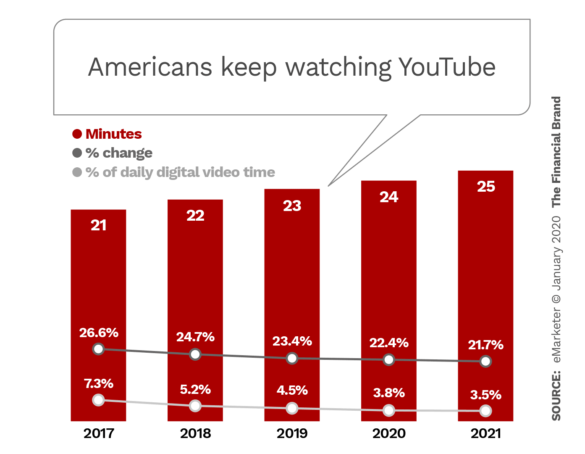 Advertiser’s spending on connected TV — CTV for short — has been growing fast and eMarketer projects that this trend will continue for at least the next four years at double-digit rates. The bulk of the spending goes towards video ads, though connected sets can also display banners and other choices.

Though formats and devices change, it’s still a battle for eyeballs. eMarketer points out that 2019 was the first year that digital video accounted for more than a quarter of the time Americans spend digitally. This includes apps and browsers, but excludes social media.

“From podcasts to streaming music services, digital audio advertising is on the rise,” says eMarketer in its “Ten Key Digital Trends for 2020” report. “2019 was a banner year for digital audio, and 2020 will be even bigger. In fact, we estimate it will be the first time that U.S. adults spend more time listening to digital audio than radio.” 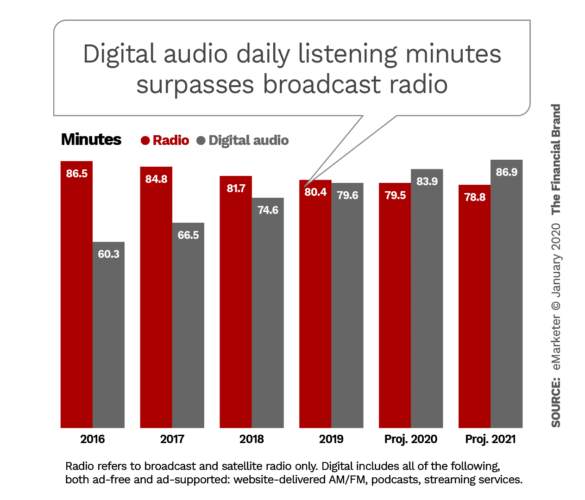 The research firm predicts that more marketers will be adding digital audio to their 2020 advertising palette as the importance of this set of channels continues to grow. Digital audio, as defined by eMarketer, includes both ad-free and ad-supported programming including website-delivered AM/FM material, streaming services such as Pandora and Spotify, and podcasts, which are covered in the final section of this article.

Among the factors that favor expanded use of digital audio is the growing presence of smart speakers in American homes. As of yearend 2019 there were over 157 million smart speakers in American homes, and 24% of Americans over 18 owned one — around 60 million people — according to the Edison Research/NPR “Smart Audio Report.” On average there are 2.6 of the devices in U.S. homes.

The research indicates that over the last five years, when in listen mode, as opposed to searching the web or other activity, users spent 5% less of that time listening to music, but 20% more time listening to voice programming. Overall, smart speaker owners listen to things on their smart speakers 17% of the time, just short of the 19% devoted to traditional AM/FM radio.

eMarketer predicts that as more advertisers seek opportunities in digital audio, more programmatic buys will become available. However, the firm also points out that as digital audio becomes a more popular choice among marketers, the bane of all digital marketing will grow: ad blocking. The firm’s report points out that such technology already exists for audio channels.

The Infinite Dial, an annual study by Edison Research of digital media, anointed podcasts in early 2019 when it found that over half of Americans over 12 had ever listened to one and that one third of that population said that they’d listened to a podcast in the last month — 90 million monthly listeners.

“The medium has firmly crossed into the mainstream,” said Tom Webster, Senior Vice President at Edison, at the time. Among the findings of the research was that weekly podcast listeners average seven podcasts a week, with 14% listening to 11 or more a week.

CivicScience, in later 2019 research, found that one in three Americans 13 or older (32%) listen to podcasts daily and that 39% listen at least weekly. “Daily podcast listeners are more likely to be men, sports fans, follow food and cooking trends, people who eat out for lunch, and heavy social media users,” the company states.

All this hasn’t been lost on the marketing fraternity. Podcast advertising revenue, estimated by the Interactive Advertising Bureau at $678 million in 2019, is projected by the organization to break $1 billion by 2021. The group’s Podcast Ad Revenue Study, performed with PWC, reported in mid-2019 that financial services advertisers accounted for 20.7% of podcast ad spending in 2018, making it the second-biggest spender after direct-to-consumer retail advertisers. The financial industry’s spending was up 14.4% over 2017.

Podcasts have come a long way since their roots of would-be broadcasters in a garage. Major media platforms like iTunes and Spotify carry podcasts now and they are produced by a huge variety of hosts and performers from historians supporting new books to name comedians finding new audiences to major publications presenting podcast news stories to virtually any other interest you can think up. 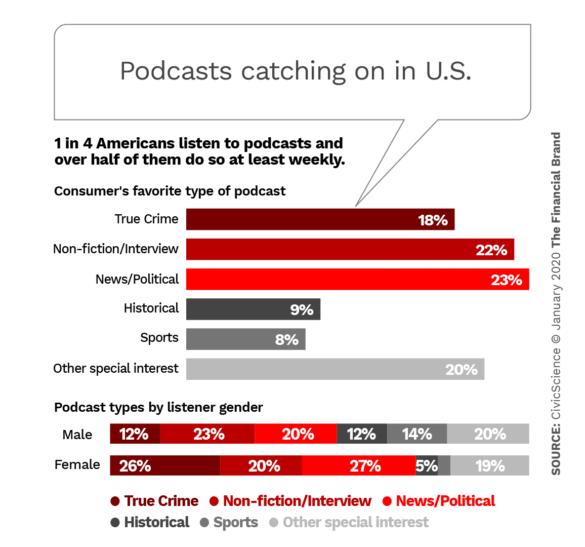 Services to provide firm measures of listener behavior and volume are evolving to give advertisers firm footing. Support for podcasts has included sponsorship advertising and some producers look for donations, through such platforms as Patreon and Kickstarter. IAB’s research indicates that while most advertising is purchased on a quarterly basis, automated programmatic advertising has started to increase. In early 2020 Spotify, building on earlier efforts, introduced streaming ad insertion technology to give marketers such information as ad impressions, frequency and reach, and to provide them with anonymous insights about podcasts’ audiences.

In podcasting, ads may be host-read or supplied to the podcaster, much like traditional radio. One advantage at present is that advertisers’ messages stand out more because there might be two of them in an hour podcast versus 18 in an hour of a radio broadcast, according to Dan Granger, CEO at Oxford Road, a marketing agency integral in podcasting.

The variety of subjects podcasts tackle is wide, and the sheer number of podcasts is daunting. Firm numbers can be hard to come by, but the field reckons it’s in the high hundreds of thousands. That’s a far cry from the days of three national networks or even the days when radio was “it.”

“Everybody in America has been thinking, ‘Let’s start our own podcast’,” says Granger, who pegs the total in the vicinity of 700,000. “There are almost no barriers to entry. The world does not need another podcast, but the world is also ready for someone who has something to say.” [Speaking of which, try the “Banking Transformed” podcast featuring Jim Marous of The Financial Brand and Digital Banking Report.]

Interesting generational trends were seen in the research. True Crime podcasts prove most popular among Gen Z — 27% ranked this as their top pick, while only 9% of Baby Boomers did. At least one out of five listeners in all age groups access News/Political podcasts, with Baby Boomers citing these programs as their top choice 31% of the time.

More and more advertisers are putting some chips on podcast advertising. Does it pay? CivicScience’s research finds that the more often someone listens to a particular podcast, the more likely they are to buy in response to an ad they’ve heard. 30% of daily listeners told CivicScience that they buy in response to podcast ads and 21% of weekly listeners say they do so. The most productive podcast categories, according to the research, are News/Political shows and special interest shows (24% of listeners to both buy). This is followed by another tie, at 21%, between True Crime and Sports podcasts.

An alternative gambit to advertising on a podcast, according to Granger, is to try the medium yourself. For example, a bank or credit union could present a financial advice podcast, basically a form of content marketing.

A good bet? Maybe not just yet.

CivicScience’s research indicates many podcast fans don’t even know such podcasts exist. And only 6% of the firm’s survey base says they ever listened to a corporate podcast — or plan to in the future.