Marriott's move to compete with Airbnb's platform-based business model should be a wake-up call for banks and credit unions to get serious about digital innovation. Traditional players must disrupt their business model themselves or have new competitors do it for them. Here are seven ways to get started.

Digital disruption is already old news in many fields — Amazon has been around for over two decades now — and yet many banks and credit unions treat it as an academic interest, something about as far over the horizon as the exhaustion of our sun.

But digital infiltration is close to becoming mainstream in financial services now, warns Jouk Pleiter, CEO and Founder at Backbase.

“Worldwide, we are actually getting closer and closer to the full tipping point — it’s not early days anymore,” says Pleiter. “Newer business models are going really fast. Look at digital payments. You see a bunch of nonbanks that aren’t just a group of funky fintechs. They are accelerating like a Netflix or an Amazon at their beginnings.”

Pleiter says that in the face of accelerating competition from fintechs and from Big Tech, most incumbent financial companies display a distinct lack of urgency. Or perhaps, Pleiter adds, it could still be a lack of understanding of what’s going on … and what could be coming.

Most incumbent banking institutions would agree that digitization ranks highly, says Pleiter, and they typically have some kind of digital strategy.

“If banks and credit unions were really honest about it, what they’re doing is like sprinkling around a bit of digital pixie dust on the side.”
— Jouk Pleiter, Backbase

However, “the digital stuff is still over on the side,” he explains. “Oh sure, there’s a great mobile app with a 4-star rating over here, and there’s a nice innovation lab over there. But if banks and credit unions were really honest about it, what they’re doing is like sprinkling around a bit of digital pixie dust on the side. It’s great to be moving in the right direction, but most are not yet working to become true digital-first banks.”

“Incumbents can aggressively make the transition from their model to the new digital model,” he explains. “But it requires great leadership. You need to be able to say, ‘This is not a little change. This is about disruption’.”

Specifically, the decision is to self-disrupt, says Pleiter. “And it takes courage to create a new organizational culture and operating model, where you really dare to change, and move decisively from familiar business models to experiment with new digital ones.”

Why Airbnb Should Be Keeping You up at Night

A good example from outside the financial services business is the announcement that Marriott, the largest hotel chain in world, has introduced Homes & Villas by Marriott International, an upscale take on Airbnb. The latter has nearly 5 million rooms available worldwide, dwarfing several major hoteliers combined. While multiple chains have been studying how to compete with Airbnb and its ilk, Marriott shot out of the gate first. 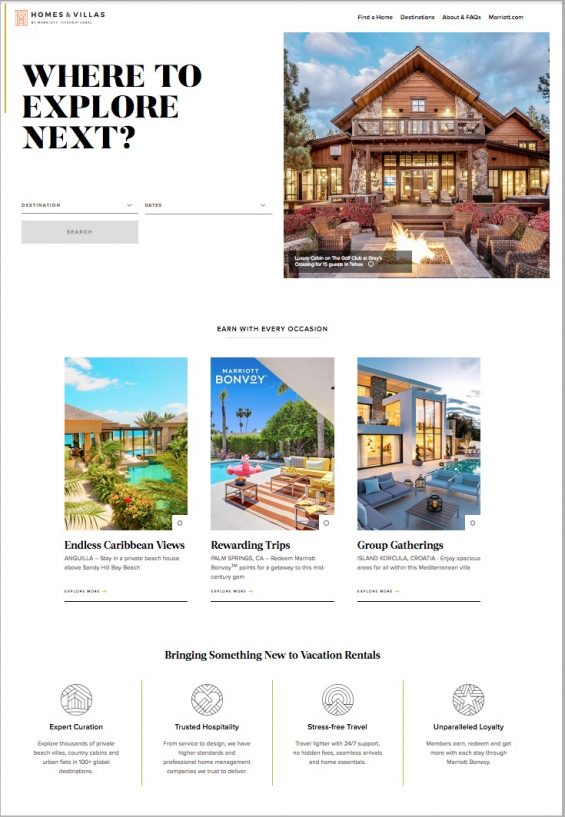 Homes & Villas is tailored to the vacation rental market, and promises a collection of curated properties that are handled through trusted home management companies that are available 24/7 to guests. Setting its program apart from disruptor Airbnb is vacationers’ ability to earn and redeem points in the Marriott Bonvoy frequent traveler program.

Incumbents making gearshifts like this serve as examples of the kind of change that banks and credit unions need to make as they choose to go digital. 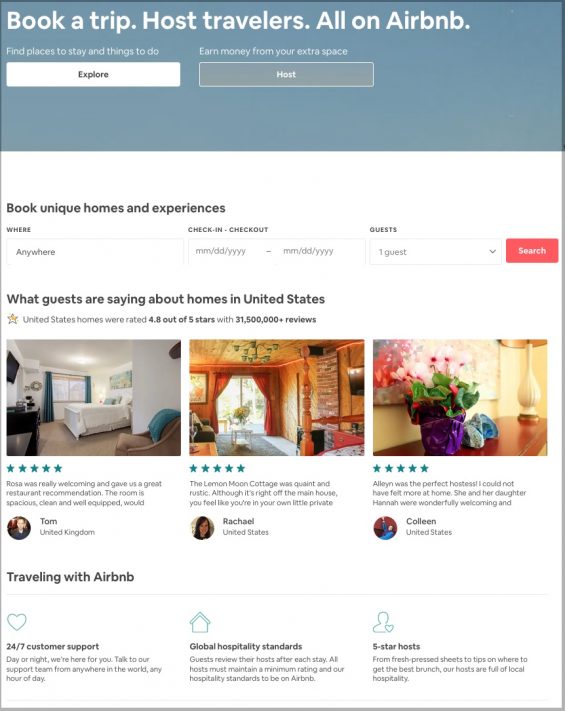 A traditional business like branch-based banking, can only grow linearly,” says Rutten. By contrast, a platform-based business can grow exponentially.

“The amount of rooms an Airbnb can add annually is explosive,” says Rutten.

The growth rates seen by financial disruptors, especially in markets outside the U.S., have been huge in large part because of what they give away, according to Rutten. At the introductory level, many use a “freemium” pricing model.

“They set out by creating a superior customer experience, and they give consumers access to that experience and to the platform for free,” Rutten explains. This enables the likes of Revolut and N26 to scale to millions of users. Such players eventually introduce premium levels of service, for a reasonable fee that, multiplied by their huge levels of users, adds up to big money fast.

“They set out by creating a superior customer experience, and they give consumers access to that experience and to the platform for free.”
— Tim Rutten, Backbase

“It’s like the stable subscription prices you pay for Netflix and Spotify,” says Pleiter. “And on top of that income, they offer the platform to other players who can’t make a platform work on their own. They earn a resale fee from such affiliates. The aggregation of the right products an the right value proposition is giving them a killer combination in the market.”

In the U.S., the rapid credit growth of Marcus, the Goldman Sachs consumer banking platform, means that it’s not only fintech challengers that can grow fast. Marcus, Pleiter points out, “is super-lightweight, compared to your typical bank.”

7 Tips for Becoming a Digital-First Bank

Pleiter and Rutten stress these points for institutions that want to advance meaningfully into digital-first service:

1. You must own the platform. Many types of companies sell and advertise profitably on Amazon, but at the end of the day, Amazon runs the place and makes the most money in the most ways.

“You have to own the platform, you don’t have to design and own the products.”

“You have to own the platform, you don’t have to design and own the products,” says Rutten. Running the platform and building consumer relationships creates an asset all its own that other providers want to reach.

2. Consider a fresh technological start — or as fresh as you can manage. Banks and credit unions routinely complain about being held back by their legacy systems and by the relative slowness of change among core providers. One large community bank maintains an innovation lab in part so it can gain what it estimates to be as much as a five-year jump on what its core system provider can provide.

This type of effort, putting a digital interface on top of older tech, is one way in which institutions can adapt. But Pleiter suggests trying the “greenfield” approach: Build your digital efforts on newer, lightweight cloud-based core systems, avoiding the boat anchor of legacy technology. Alternatively, an institution can aggregate several fintech partners’ technology into one digital home that interfaces with legacy tech.

Pleiter says a combination of all three approaches could also work.

But such thinking ignores the other side of the investment. Institutions that adopt modern systems gain major savings in the costs of such routine functions as onboarding new consumers. Rutten notes that when DBS Bank made a tectonic move to disrupt itself across the board with digital approaches, it cut the cost of onboarding by over 40%.

Beyond this, digital relationships may turn out to be broader and deeper, according to Pleiter. In time, he suggests, running the platform can be a “winner take all” stratagem.

4. Keep your eyes on “easy.” A key part of customer experience is keeping the experience simple and easy. Pleiter and Rutten both stress the importance of being the “go-to” app or platform that consumers look to first.

“Get consumer-obsessed about removing friction and leveraging digital,” says Pleiter. He notes that people of all ages who use fintech apps rave about how easily they can enroll, usually within two minutes. One reason for Netflix’ success is that “it’s the easiest platform for consuming media,” says Rutten.

5. Go for quick wins. Traditional financial institutions think in terms of five-year plans. Rutten says this is not how digital companies plan and change. While they may have a multi-year roadmap in mind, operational planning occurs in six-month blocks, often less, with the focus on a continuing stream of deliverables. Revolut, for example, launches two or three new capabilities per quarter.

Such planning enables production of “quick wins,” according to Rutten. This builds momentum that can keep enthusiasm up. A critical point because, as Rutten says, “disruption is painful.”

6. Revise your concept of success and failure. Banking’s roots lie in risk-averse thinking, so if something doesn’t work as foreseen, it is seen as a failure. A common belief among innovation lab leaders is that multiple failures lead to iterations that lead to success.

But Pleiter suggests a fresh perspective. Don’t even label any of that as a “failure.”

“It’s not a failure,” he says. “It’s just the little price you pay inside your organization to learn.”

7. Spread digital freedom around. Confining the ability to question the status quo and experiment digitally to an innovation lab is something both Pleiter and Rutten reject.

“Start by creating little pockets of entrepreneurial behavior inside the day-to-day operations of the bank,” says Pleiter. He advocates this even for Legal and Compliance!

“Transformation requires making safe spaces to let digital thinking impact your core business,” Pleiter says. “We’re not talking about a bunch of hipsters in the lab, but enabling digital talent inside the traditional bank.”