Subscribe Now Get The Financial Brand Newsletter for FREE - Sign Up Now
The financial services industry must respond to a mobile marketplace that has a new demographic profile, new usage patterns and new expectations around AI, IoT and other digital technologies.

After years of strong mobile growth being driven by younger demographic segments, the majority of recent, more modest growth can be attributed to the 55 and older generation. In fact, consumers in the 55+age group have a three-year compound annual growth rate of nearly 8% compared to only 2% for the 18 to 34 segment, according to a study from Deloitte.

While the rate of growth in ownership of smartphones has tapered off, exciting technologies are beginning to stimulate the imagination of the mobile consumer, including artificial intelligence (AI), machine learning, virtual reality (VR) and augmented reality (AR), the internet of things (IoT), 5G, and the integration with other non-phone devices (watches, glasses, tablets, etc.). At the end of the day, the banking industry must stay in front of these trends, offering consumers the experience they expect on the platform(s) they prefer.

In Deloitte’s seventh annual Global Mobile Consumer Survey, consumer attitudes about mobile technology were analyzed. The research validates a stabilization of our dependence on mobile devices, while indicating major shifts in usage patterns which impact any industry wanting to reach the increasingly digital consumer. As in 2016, close to 90% of consumers viewed their phone within an hour of waking up, with roughly 80% doing the same within an hour of going to sleep.

There was also a stabilization in the average number of times a consumer views their phone each day (47 times). The exception was with the 18 to 24 age segment, who view their phones an average of 82 times according to the survey. Finally, the average number of apps installed has also stabilized at 23, with the reasons for not downloading more being a lack of need and a lack of space on phones.

Interestingly, the Deloitte research found that over 70% of younger demographic groups believe they are using their phones too much and are looking for ways to limit dependence. Alternatively, only 13% of consumers over 55 had the same concerns. 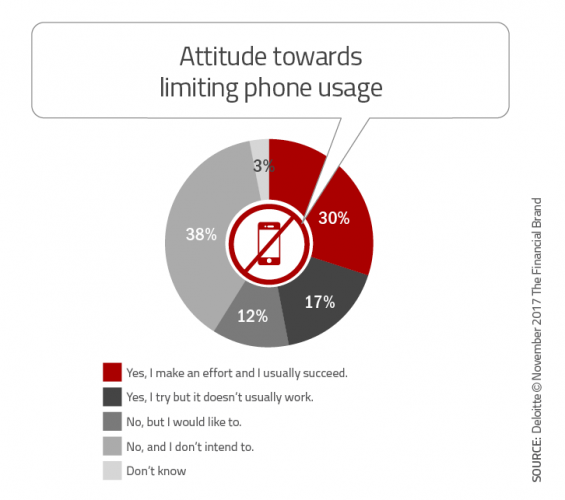 Impact on the Banking Industry: The impact of these trends on the banking industry is clear. As the penetration of smartphones, level of use and downloading of apps stabilize, mobile banking growth will need to come from delivering added value that improves a consumer’s daily life as opposed to hoping for organic mobile banking growth.

And, rather than only relying on the youngest demographic groups to provide leading indicators, the oldest demographic groups may provide some of the keys to increasing mobile banking market share. In fact, the daily use of smartphones by oldest age groups is the same or higher than any group except the 18-24 year-old segment, while daily use of smart watches by the oldest consumer is higher than any age category. 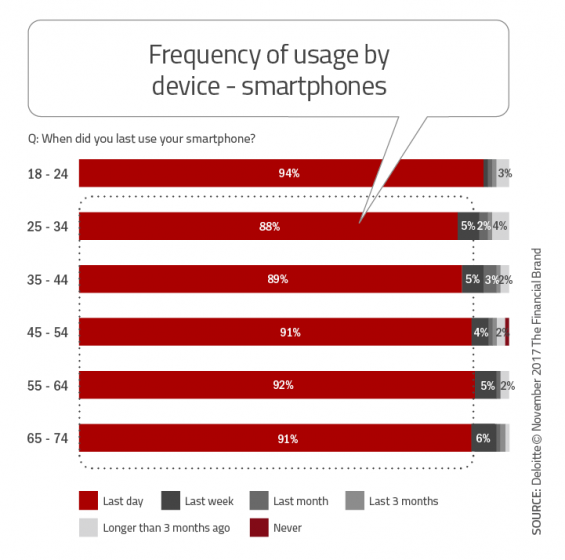 Mobile Beyond the Smartphone

As smartphone penetration and usage is beginning to stabilize, consumers are increasing the use of other wireless devices including tablets, eBooks, fitness bands, smart watches and even virtual reality (VR) headsets. And, while smartphone penetration is highest for consumers from the ages of 18 to 24 (93%),  the penetration of all other devices is highest in the 25-34 age group, attributed to dual impact of digital device familiarity and higher disposable income.

When consumers were asked about the way they communicated on mobile phones, all options increased in 2017, including text messaging (91%), voice calls (86%), email (81%), social messaging (72%) and video calls (30%). The increase in voice calls reversed a four-year decline.

Impact on the Banking Industry: Banks and credit unions must look beyond the phone when delivering mobile banking solutions. Going forward, digital banking solutions will need to be device agnostic, with the ability to flow from one device to another seamlessly. This applies to functions as basic as balance retrieval and as complex as applying for a new account or delivery of personalized financial advice. 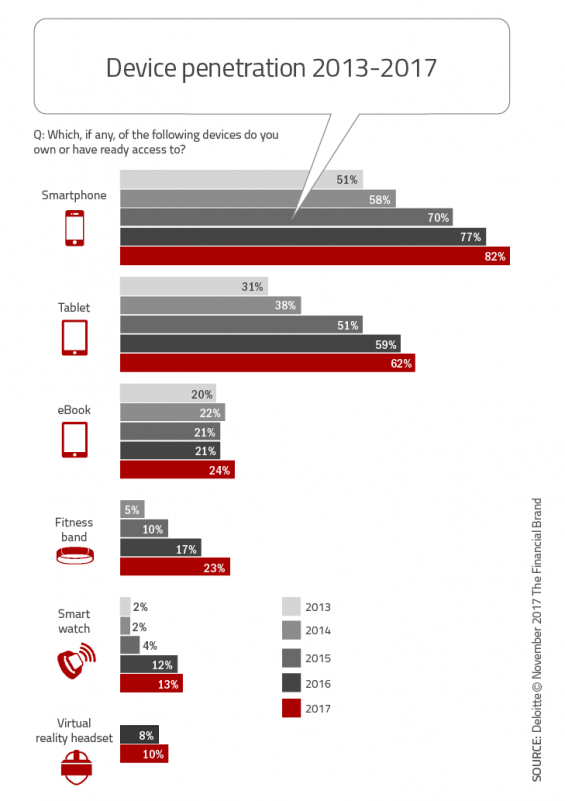 The survey found a significant growth in use of mPayments in 2017, albeit against a rather low base number. According to Deloitte, consumers who said they made an in-store mobile payment with a smartphone or other device in 2017 reached 29%, which is a 50% increase over 2016. Those who used mPayments weekly also increased by 50% in 2017, (from 8% to 12%).

Impact on the Banking Industry: Most industry observers have predicted a mobile payments explosion for years, with merchants, consumers and network providers not being on the same page. Future growth in mPayments will be highly dependent on improved perception of security and a better value proposition that offsets the simplicity of cash and plastic. At the same time, there will need to be a device agnostic capability that will allow consumers to pay on the device they choose.

Smartphones are the launching pad for other advanced technologies. These range from the Internet of Things (IoT), to wearables, autonomous vehicles, augmented reality (AR), virtual reality (VR), AI and machine learning.

When consumers were asked about the value of alternative ‘connected’ technologies in an automobile, the highest valued functions were navigation, traffic and weather conditions and car maintenance. At the same time, the top three wearables (fitness bands, smart watches and smart glasses) each had increased desirability in 2017. With each of these new technologies, security and privacy continue to be the biggest concerns.

AI and machine learning are beginning to be used more extensively by the general public. According to Deloitte, “Already 68% of consumers are using some form of AI/ML on their smartphones. Highest use categories include predictive text, voice assistants, and driving route suggestions. Those are in use by one-quarter to one-third of consumers.”

Impact on the Banking Industry: Consumers continue to be concerned about security and privacy, especially in conjunction with advanced technology. Despite this concern, the vast majority continue to put themselves at risk by signing legal agreements without reviewing, downloading apps without understanding the amount of data shared and by using passwords that are already used for multiple apps.

The banking industry could provide a significant benefit if they could develop ways for consumers to protect their identity and keep data secure. Cloud technology, the blockchain and biometrics provide some assurances, but a more comprehensive solution could position banks and credit unions at the center of the ‘identity ecosystem’.

It is clear that the mobile ecosystem is maturing at the same time that it is evolving and expanding to include new technologies. Growth of mobile banking in the future will rely less on the growth of smartphone penetration, and more on the experience differentiation that can be delivered by banks and credit unions.

The digital consumer is becoming more educated on the potential of wireless networks, and more selective of the organizations they will partner with for digital solutions. Beyond the smartphone, the digital consumer wants solutions that are device agnostic. More importantly, they value security and primacy more than ever.

To succeed, financial organizations will need to significantly improve current mobile banking offerings, while innovating to leverage other advanced technologies. As stated by Deloitte, “The mobile world is evolving, growing more complex, and for many, becoming ever-more attractive.”