Subscribe Now Get The Financial Brand's FREE Email Newsletter
The Financial Brand's Power 100 rankings provide marketers with a compass to see what financial institutions are doing to generate traction in social media channels. Let's take a look at some of the most successful credit unions on Facebook and see what ideas you can use. Here are five tangible and contextualized insights to help your social media marketing efforts.

A credit union’s natural affinity is with the community it serves. Traditionally that’s an important differentiator between credit unions versus big banks and super regional institutions. When looking at how credit unions leverage their ties to community in social channels, the most effective content tends to highlight being a good neighbor and community advocate without feeling like “filler” content.

Steal this idea from #11 ranked OnPoint: The top credit unions on Facebook diligently post community-oriented content. From blood drives to paper shredding sessions, credit unions like using social media to showcase their corporate citizenship. Content that amps the brand at the local level, such as OnPoint’s multiple posts showcasing 2014 Educators of the Year, exemplifies community-focused content, while neatly linking to the credit union’s roots in the educational industry. Most credit unions either sponsor, or are involved with community programs, and can/should use social channels to celebrate their involvement.

2. Product is not a dirty word

Within social streams, promoting products is sometimes viewed as a no-no. While consumers are indeed sensitive to overt selling in social channels, consumers also recognize financial products are your business (and because members are part “owners” of a credit union, it’s their business, too). The truth is that consumers will often appreciate product promotions that have relevant and contextualized benefits for them. Here are examples of how credit unions successfully promote products in social media.

Steal this idea from #19 ranked Kinecta: Showcasing actual homes for sale in their footprint, Kinecta builds interest in their home lending expertise, and highlights the profiles of mortgage specialists in local branches. For their “Smart Move” posts, Kinecta points Facebook fans to a mortgage Calcubot so they can determine whether or not they can afford the home. Under the “Smart Move” banner, the credit union seasonally sponsors home buying seminars and home buyer information kits — all promoted on Facebook. 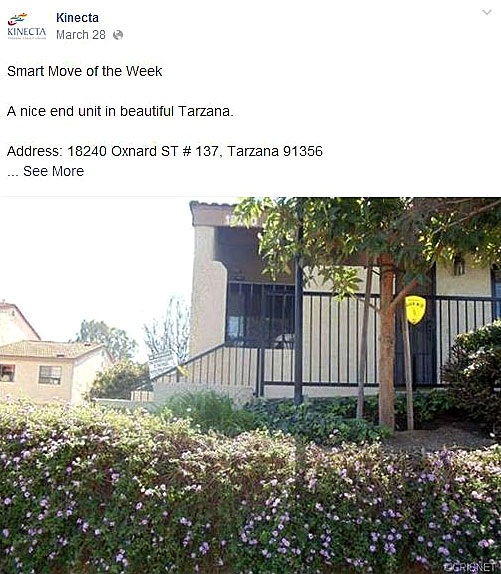 Steal this idea from #25 ranked Generations: Generations found an effective way of promoting savings without a heavy marketing message. The credit union posted the 52 Week Money Challenge with an effective graphic that encourages week-by-week savings with a creative and easy system. 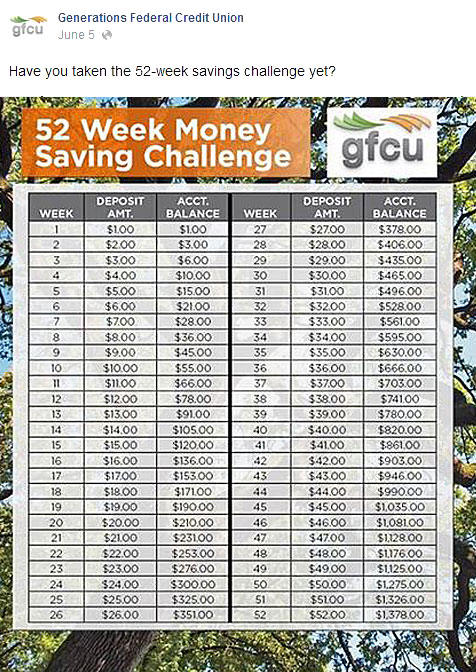 3. Membership does have privileges

Because of the very nature of cooperative financial institutions, credit unions can speak a little differently to consumers. Banks often find themselves pulling back from certain types of content that credit unions tend to embrace.

Steal this idea from #14 ranked First Tech: First Tech takes a very straight-forward approach in asking members if they notice and care that the credit union has increased overall e-mail volume. It’s a good policy, and one typically reserved for a more formalized research process. The message — “we’re tweaking our approach to email to see what works for you” — is noteworthy for its simplicity, its straightforward and honest tone. This alone could easily defuse any negative reaction to increased e-mail volumes.

Steal this idea from #16 ranked Elevations: Crowdsourcing is not new. Elevations keeps it simple, while underscoring the value of input from members. The credit union is upfront about seeking “design direction” rather than committing to a specific winning card by vote. Most financial institutions might hesitate to be so candid, and instead might dismiss crowd-sourced designs and ideas as too complicated or “unstrategic.”

4. Brands just want to have fun

Feel free to use social channels to add a sense of fun to your credit union. There are plenty of great examples from the highest ranking Power 100 credit unions, with posts that purely entertain or amuse… albeit with style. Here are some examples that avoid many of the pitfalls financial institutions run into when tyring to introduce humor in social media. 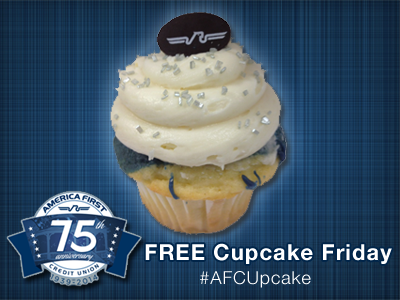 Steal this idea from #15 ranked BECU: BECU found a fun way of turning what could be just another fund-raiser into something their membership could rally around simply by taking advantage of the left-coast versus right-coast divide. They challenged their Facebook base in a contest to raise $50,000 for the Junior Achievement in Seattle, where the credit union is based. 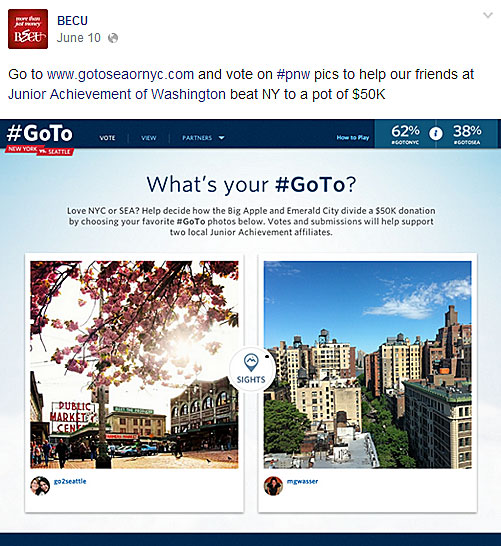 It might be difficult for a bank with millions of customers spread across the continent to create and foster traditions. Not so for credit unions.

Steal this idea from #2 ranked Mountain America: Mountain America created an annual participatory event — a branded 2015 calendar contest — featuring original landscape photographs from members within their scenic geographic footprint. The following Facebook post teases the upcoming calendar promotion, allowing the credit union to get the word out in advance. The campaign progressed to include more informational posts, including some directing participants to the credit union’s Instagram account. Mountain America gets mileage from what might be seen as a promotion but has become a strong, brand-building tradition.