As customers continue to change their channel usage patterns, banks and credit unions must focus on delivering a consistent and seamless experience across various touch points. More than just a buzzword, omnichannel banking is an opportunity to deliver bottom line results by gaining insight into customer's channel preferences and behavior.

Today’s customers are becoming highly sophisticated and are accustomed to receiving seamless service and targeted offers from companies like Amazon regardless of the device in use. So, it should come as no surprise that these same customers are beginning to expect similar experiences from their banking partner(s). From researching new services, to opening an account, checking balances, conducting transactions or getting customer support, delivering an omnichannel experience has become table stakes in a highly competitive marketplace.

The Importance of Omnichannel Banking

Banks are in an unequalled position to understand their customers. They already can see product use, transaction patterns and demographic profiles. By leveraging channel usage insight, they can develop an even more detailed customer profile. Understanding not only what the customer looks like, but also how they conduct their banking can allow for improved product offers using their preferred channel.

Developing strategies to integrate disparate digital and physical channels into a single, seamless experience has to be a priority. By analyzing the activity and preferences of their client base, banks can tailor offerings to address the priorities of each individual customer. Mass, low profit segments can be serviced accordingly as can high margin services and clientele.

Streamlined, integrated systems, a single customer view and an optimal customer experience are all objectives to work towards. Banks focus on these objectives will get the edge over the competition.

Channel Use Shifts and Increases

It shouldn’t come as a surprise that branch transaction volumes are slowly trending downward or that online and especially mobile banking usage are quickly trending up. What is less clear is whether call center usage will decline as more transactions migrate to digital platforms, or will it, in fact, increase as customers use call centers as their digital help desk? Finally, will Facebook, Twitter, and other social media platforms become banking channels in the future?

According to the channel usage component of the latest U.S. Retail Banking Study from Gallup, three different themes emerged:

1. The branch-ATM-online trifecta still defines the core of day-to-day banking. The core banking needs of most customers are being handled by branches, ATMs and online banking. In fact, nearly half (46%) of customers have used all three of these channels over the past six months. While it may cost a bank more to serve these customers (compared, for example, to those who use mainly digital or phone channels) these core customers keep an average of 4% more of their deposits and investments with their primary bank and generate an estimated $155 more in profit per year to their primary bank than people who don’t use all three of these channels. So while it may be commonplace to talk digital-first, banks can’t alienate a significant portion of the customer base in the process. 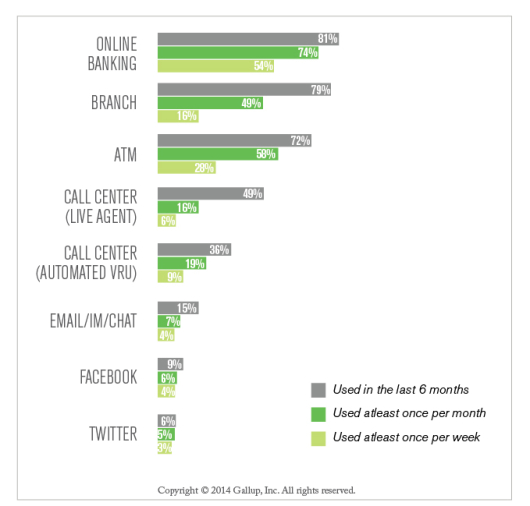 2. Mobile banking usage is on the rise, but it is adding to, not replacing, other channels. Among the largest U.S. banks that Gallup studied in both 2012 and 2013, heavy users (at least once per week) of mobile banking increased by 11 percent (more than in any other channel). Not surprisingly, 57% of Millennials/Gen Y customers have gone mobile for their banking. That percentage falls to 37% for Gen X customers, 16% for baby boomers, and less than 10% for seniors.

Below is the breakdown of channel use based on branch type/size:

3. Social media customers are valuable. Slightly less than 9% of customers contacted their bank via Facebook or Twitter during the six months of the Gallup study, and roughly half of those have done both. These socially engaged customers are both younger (91% are either Gen X or Gen Y) and more affluent. These customers are 12% more likely to be mass affluent ($100K to less than $1M in investible assets) and 18% more likely to be emerging affluent (age 35 or under with incomes over $75K/year.) These customers also are more engaged with their bank and hold much more positive feelings toward their bank than the typical customer.

Given the strong “AAA” status (age, affluence, and attitudes) of these customers, banks should continue to develop, refine, and strengthen their social media focus where possible.

While more and more customers are moving to digital channels to conduct their routine banking, they aren’t abandoning traditional channels at the same pace. This may be caused by banks not providing easy-to-use digital new account opening options or even simple mobile apps.

So, while the industry and more consumers are trying to embrace the omnichannel perspective, the vast majority of new accounts are still initiated in the branch. This is because digital channels don’t offer customers the kind of experience they desire for more complex, important interactions like opening an account.