A three-year study from Scratch, an in-house unit of Viacom, found that a third of millennials believed they won’t need a bank in the future. These millennials, defined as those between ages 18 to 33, also ranked the top four banks in the “ten least loved brands” and would rather go to the dentist than to their bank.

Is this surprising? This segment of the population has grown up in an era that saw trust in banking erode due to the financial crisis and a near stagnant economy. This is also a period when new technology has enabled firms like Simple, Moven, Square and PayPal to be more relevant with a generation that would rather handle finances on their phone than in a branch.

Here are some of the findings from the Millennial Disruption Index:

These beliefs are coming from the largest generation in the U.S. (84 millions) with a new found purchasing power of over $1.3 trillion that represent the vast majority of new home buyers. They are far more tech savvy than previous generations, use their mobile devices continuously, look for deals in every buying category and are connected through multiple social networks.

According to the TD Bank Financial Education Survey, many millennials look to their parents and friends for advice on financial services and many still rely on their banks. Ninety percent use online or mobile tools for everyday banking activities, with 57 percent saying they used mobile banking more frequently than last year.

It is clear, however, that banks are having a difficult time keeping up with the needs of this segment. While banks spent time improving the online banking experience, millennials had already moved to mobile devices for communication, transacting, entertainment and information. The industry’s response, for the most part, has been to provide mobile access to online banking platforms. Only banks built for the mobile device like Simple, Moven, GoBank, Fidor, mBank, Soon and Hello seem to see the future.

How Do Banks Need to Respond

As talk has shifted to the Internet of Things, banks need to become part of this talk. An entire industry needs to reimagine what banking means to consumers and determine the best way to leverage new technology to integrate banking into consumers’ daily activities. Downloadable banking accounts need to replace checks and potentially even plastic.

While branches may not disappear, they need to integrate new processes and technology so that the transition from mobile to physical is seamless. Banks also need to find better ways to differentiate, since millennials view all banks as being the same. New products or services aren’t the answer … enhanced experiences will provide the foundation for differentiation in the future.

The banking industry is reaching a tipping point. The millennial consumers (as well as older generations) are using other industries as a point of reference for what they expect from their financial services partner. If they don’t receive the experience they want, the results from this survey make it clear they will look elsewhere (outside traditional providers) to meet their needs.

This should serve as a wake-up call to the entire industry. While banks are not becoming obsolete, they appear to be unresponsive to an entire generation. It’s time for disruption to come from within the industry.

BBVA may have heard the call when they purchased Simple. They bypassed legacy systems, legacy processes and legacy thinking to leapfrog the rest of the large banks in delivering a better version of mobile banking. 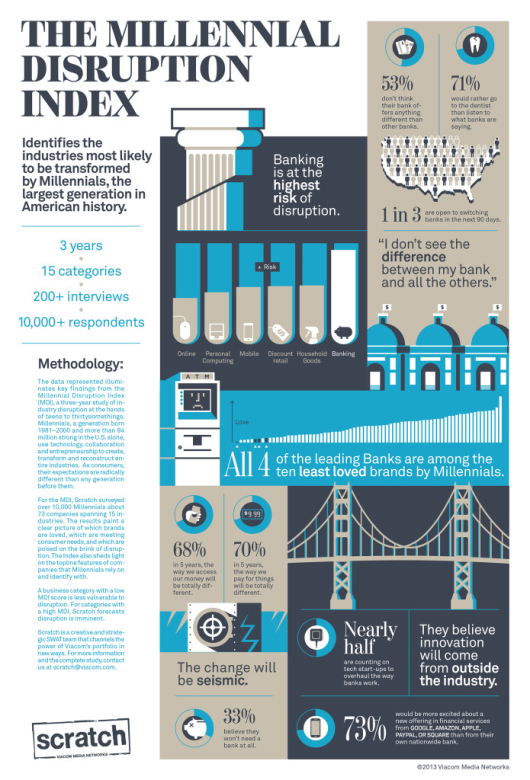