The USDF Consortium has set out to build a system for bank-minted stablecoins that would blend the attractions of digital currency, blockchain administration and faster payments. In time this could improve payments and other experiences for both companies and consumers.

Any American who has taken the public tour at the Bureau of Engraving and Printing in Washington, D.C., will remember fondly seeing huge sheets of U.S. currency rolling off the government’s presses. There’s no comparable physical place to watch stablecoins being produced, given that they are a digital abstraction, but that doesn’t mean they’re not real. In January 2022 total stablecoin market capitalization reached $174 billion, including leading names like Tether, USD Coin, Binance USD, and many more, according to CoinMarketCap.com.

To date, many of the uses for stablecoins — digital currencies denominated and tied to fiat currencies, such as the U.S. dollar — have been to facilitate other digital currency transactions. But the banking industry has fresh designs on the stablecoin. Beyond business payments, early intentions are to use the technology for consumer payments, as well. Also envisioned are financial marketplaces and crypto and securities lending.

In early 2022 commercial banking interests came together to begin working toward bank-issued stablecoins, a new phenomenon in this segment of digital currency. The USDF Consortium is a group of FDIC-insured banks that is developing a stablecoin — USDF — that will be backed on a 1:1 basis by U.S. dollar reserves held by the consortium members issuing the stablecoins to their customers. USDFs will also be redeemable through bank members of the consortium.

The new stablecoin will move via blockchain technology, specifically the Provenance Blockchain, a public chain designed for the financial services industry that will facilitate not only money transfers between banks and their customers, but also many other financial transactions.

One feature promised by the creators of the USDF stablecoin is built-in programming that will prevent transfers of the digital currency to wallets of parties that haven't been subject to KYC/AML screening. 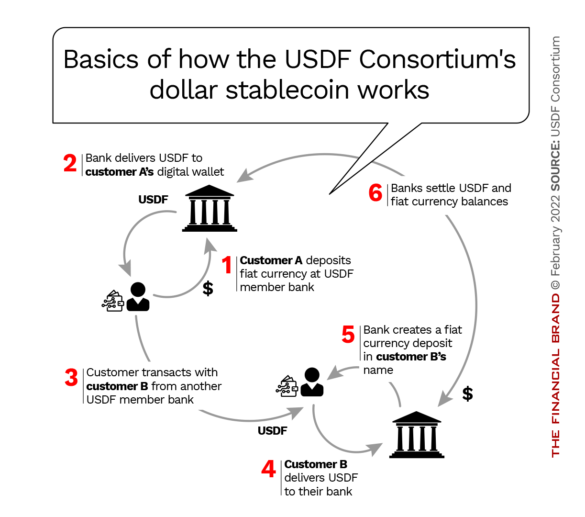 The report issued by President Biden’s Working Group on Financial Markets in fall 2021 discussed the risks of the stablecoin market at length. It recommended that stablecoins used as payments vehicles be subject to federal prudential regulation. It expressed some favor for issuance of stablecoins by regulated banks.

Members of the consortium will use a “smart contract” — a self-enforcing blockchain mechanism — which will allow members to mint USDFs in amounts that correspond to dollar deposits in the accounts of bank customers that want to transact in stablecoins, according to Ashley Harris, General Counsel at Figure Technologies, and chair of the USDF Consortium board.

Two founding members of the consortium — Figure (which has a bank charter application pending at the Comptroller’s Office) and JAM FINTOP Capital, a fintech investment alliance of community and regional banks — are specifically in charge of facilitation and promotion of the fledgling stablecoin. Founding bank members include New York Community Bank, NBH Bank, FirstBank, Synovus Bank and Webster Bank, N.A.

The founding banks are at various points in regulatory approvals to actually issue stablecoin. In addition, the banks’ developer staffs or outside specialists must complete connections to the USDF system.

However, the consortium’s goal is to increase the number of participating banks substantially. Among up-front requirements: having $1 billion or more in assets, good regulatory standing, well-capitalized status, and a Community Reinvestment Act rating of at least “Satisfactory.” Membership costs $20,000-$50,000 based on size. (Presently only commercial banks can join. Harris says that in the wake of “very forward looking” guidance on stablecoins from the National Credit Union Administration, “we could see a similar network develop among credit unions.”)

“Right now we’re not really focused on the competitive side. This market is very large — it’s grown exponentially in the last year — and it’s still very early,” Harris says in an interview with The Financial Brand. “It’s a green field, particularly for banks that are just starting to get into this activity.” She adds that recent guidance from federal regulators — such as OCC Interpretive Letter 1179 — should help more banks get into stablecoins.

“For many banks, this will be the first thing they’ve done with the blockchain. They’re looking at USDF as a way to get a foothold into digital asset strategy, to build on it.”

As part of its own learning curve, the consortium is looking at other bank networks. “We’re looking at the frameworks for Zelle and Nacha,” Harris explains. “They’ve solved similar problems.”

Read More: Banks and Credit Unions Wade Into Crypto Banking (And Why)

Selling Points for a Bank-Issued Stablecoin

What is the attraction for this mechanism, when there are faster-payments schemes here or on the way?

It’s a package with multiple features. Harris ticks them off. Cost is one — cheaper transactions should become possible. Faster payments will be possible. “We’ll be replacing ‘trust’ with ‘truth’,” Harris explains, given that payments will be real funds, not payment instructions. The consortium’s network has processed several transactions to demonstrate feasibility since last fall. In one trial, a buyer and seller agreed on a price for some securities, and then the securities and USDFs changed hands simultaneously, “so there was real-time settlement.”

In a later demonstration, NBH Bank minted USDF and transmitted it to a customer of New York Community Bank. Early uses for customers will likely also include invoicing and supply chain finance.

As a programmable currency, USDF can be set to carry out actions after certain conditions have been fulfilled. For example, distribution of funds via USDFs could be triggered by receiving all required digital signatures on loan documents.

What Attracts Banks to USDF Stablecoin

“If you look at today’s payment systems, they’re as efficient as they can be,” says Kramer in an interview. “If you look at what we’re trying to do, giving clients access to payments 24x7x365, this is how you can leverage USDF. Real time reduces friction. We know there are many options out there, but we want to provide our clients with a safe foundation to do this, with a bank versus a non-bank solution. Using USDF exclusively minted and exchanged by customers and clients of consortium member banks provides a safe alternative to non-bank players who may play in other stablecoins.”

“There’s going to be room for multiple networks in the field,” says Ordonez, also a USDF Consortium board member. “Over time, some level of interoperability and interconnectedness makes a ton of sense.”

Ordonez does see banks having to make a decision on where they want to be as payments systems evolution continues to accelerate. She saw a statistic that indicated that globally over half of payments volume is already moving on the blockchain in some way.

Ordonez says her institution considers it critical to have a seat at the table early on to understand where the stablecoin technology could head for banks.

For Webster, an early use case would be handling loan syndications, sales and securitizations. Joining smart contracts and real-time settlement would streamline the bank’s processes and make it possible to scale up operations efficiently.