Is 'bank' now a liability in financial institution marketing? A few institutions think so. But before embarking on a significant rebrand without it, financial institutions need to be sure they are not simply reacting to the fad of the moment. A new name (with or without 'bank' in it) is no substitute for a carefully crafted brand strategy, experts say.

Though overall still a nascent trend, more banks are dropping the word “bank” from their public- facing brand name in an attempt to be more appealing to consumers. Citizens Bank, part of Citizens Financial Group, dropped the “bank” from its name late in 2021, becoming, simply, Citizens.

Truist — formed from the merger of BB&T (Branch Banking & Trust) and SunTrust Banks in 2019 — does not use the word “bank” in its new name. Chase, while officially still JPMorgan Chase Bank, N.A., has not used it in marketing for years.

In some respects, the thinking behind this logic is understandable. After all, banks typically rate low in surveys of brand loyalty and brand affinity. Many of the fintech neobanks that traditional institutions compete against proudly eschew the word “bank” from their brand name. Some, like Chime, were forced to stop using any reference to “bank” in their marketing.

So, should more banks follow suit, and de-emphasize the fact that they are a bank in their branding and marketing? While this could be a successful strategy for some, it is likely not the path to tread for most financial institutions, several financial branding experts say.

“There might be some banks, especially large banks with great brand awareness, that are considering it,” says Juliet D’Ambrosio, Managing Director of Strategy for Adrenaline Agency, in an interview with The Financial Brand. “But it’s probably not viable for 95% of institutions.”

That is because, unless they are in a market where they have a significant presence or they are a large global institution, most banks may end up risking losing mindshare when it comes to the average consumer if they dropped the word “bank” from their name.

Banks that do not have significant geographic market share or a large marketing budget should tread carefully before removing ‘bank’ from their branding.

“So, think about the increase in marketing dollars you would have to spend on brand awareness and overcoming the awareness gap,” D’Ambrosio states. “I think for most banks, they need to proudly own the category they are in.”

Influence from Fintechs and Consumer Brands

Still, there are reasons why some banks may be tempted to strike the word “bank” from their branding vocabulary, D’Ambrosio acknowledges.

One is the “staggering rise of fintechs as a competitive force” and the fact that most of them lean into anti-bank messaging and marketing, she notes.

“Fintech names are usually sleek, simple, fun to say and don’t include the word ‘bank’.”

“These are some of the voices and trends whispering into some bank’s ears,” she observes.

Banks could be influenced by general consumer brands that are adopting simpler brand names.

There can be benefits of simplifying brands to appeal to specific audiences with a fresh, relevant brand image and style that matches their perceptions related to speed, simplicity, ease of doing business and overall brand experiences, notes Mark Weber, CEO and Chairman of Strum Agency.

“It is clear that the impact of fintechs and rapidly growing neobanks like Chime, Varo and SoFi, along with digital startups like Marcus from Goldman Sachs, are causing serious reflections among banks and credit union leaders about the need for brand differentiation,” Weber points out. “Getting the attention, interest and curiosity of Millennials and Gen Z consumers will continue to require critical brand positioning strategies, and for some institutions, that means repositioning their perceived older, traditional bank models.”

Still, this is not likely to become a big trend in banking just yet, Weber believes, adding that banks such as Truist and Citizens have such commanding scale advantages that many others don’t “from branch footprints in major markets, economies of scale, large advertising, PR and social media budgets, that give them the ability to build a prominent and distinctive brand name, without having to use ‘bank’ as a moniker.”

The Risk of Losing Consumer Trust

Among the potential pitfalls for financial institutions choosing a sleeker and simpler branding that doesn’t include the word bank could be losing trust with customers and potential customers. Despite the negative connotations consumers often associate with “banking,” the fact is that most people trust their bank or credit union.

73% of consumers trust their financial institution to keep their best interest in mind, while only 51% say the same about the federal government regarding banking and personal finance, according to a poll conducted this year by Deposit Accounts. 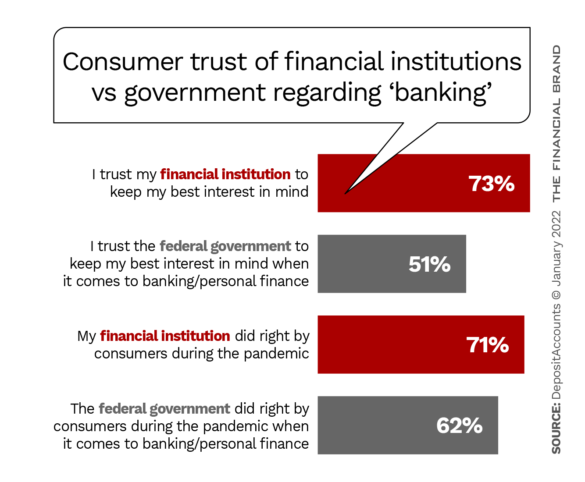 Furthermore, the study found that those who bank with traditional brick-and-mortar institutions or credit unions generally have more faith in their financial institution than those who primarily use an online-only bank.

For example, 75% of consumers who do business with a predominantly brick-and-mortar bank and 74% with a branch-based credit union trust their financial institution to keep their best interest in mind, versus 61% of those using mainly an online-only bank, the survey notes.

Banks that decide to pursue a bank-less rebrand could risk losing credibility and authenticity, D’Ambrosio observes.

“Customers want trust now more than ever,” she states. “Banks and credit unions have that trust in spades. Fintechs are newer and a bit less tried and true. So, if you drop the word bank from your name, that sense of ambiguity might work against you.”

( Read More: An Inside Look at The Strategy Behind BofA’s Brand Refresh )

There’s also the possibility that banks that take this route may also come to regret the move in years to come. About a decade ago, there was a significant trend of credit unions dropping the words “credit union” from their names, largely to compete better with banks and attract consumers that did not know what a credit union was.

Now, many credit unions are embracing their status and using it in their marketing materials to demonstrate how they are different from banks, observes Gina Bleedorn, Chief Experience Officer for Adrenaline Agency. In fact, Adrenaline recently worked with a credit union client that added the words “credit union” back into its name after removing them more than a decade ago, she says.

Banks that do think about potentially following in the footsteps of Truist, Citizens and others need to ensure they have fully thought through their brand strategy before moving ahead, says Strum’s Mark Weber.

“In some markets, this works better than others, but unfortunately this naivety that a new moniker is a panacea for good strategy, can bite back if organizations don’t properly build a relevant and differentiated brand identity, enhance their brand experiences online and offline, and make the critical investments in awareness building,” Weber states.