Subscribe Now Get The Financial Brand Newsletter for FREE - Sign Up Now
Consumers would like nothing better than a return to something like 'normal.' But even as increases in credit usage appears likely, the specter of inflation is among the factors adding uncertainty to the picture.

Consumer credit across the board is expected to rise in 2022, in some cases still behind pre-pandemic levels but in others exceeding it, according to projections from TransUnion. Some of the growth will result from credit-hungry lenders offering more credit to nonprime borrowers, notably in auto lending, credit cards and unsecured personal loans.

Massive increases in home prices are driving major growth in home equity that consumers could tap for secured personal borrowing, potentially waking up a credit category that has been very quiet for years.

Overall, TransUnion cites increasing normalization of the economy as a factor in growth anticipated for 2022. A potential influence will be increases in interest rates. The Federal Reserve has indicated there will likely be at least three quarter-point hikes in 2022.

Wild cards include ongoing inflation as well as the impact the Omicron Covid variant (and others) will have on the economy. Meanwhile the last elements of pandemic debt forbearance measures will be running out.

The impact of Omicron is anybody’s guess. As for inflation, in mid-December 2021, Fed Chairman Jerome Powell told a press conference, “There’s a real risk now, I believe, that inflation may be more persistent and… the risk of higher inflation becoming entrenched has increased.”

Lenders’ strategy of increasing relationships with nonprime customers could backfire if not managed carefully. Inflation often hits lower-income borrowers harder than higher-income consumers, according to Charlie Wise, Head of Global Research and Consulting at TransUnion.

Four out of five consumers surveyed by Lending Club and PYMNTS.com say they are highly concerned about inflation. 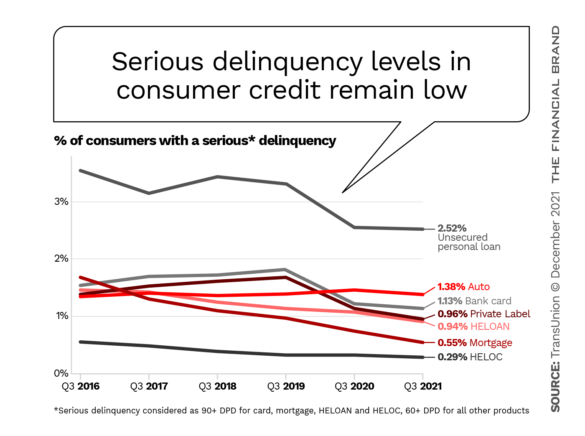 Another uncertainty will be the ripple effects of major spending through buy now, pay later programs during the 2021 holiday season. “Growth in that sector continues to be enormous,” says Wise in an interview with The Financial Brand, “and we get questions about it from our customers every day.” (TransUnion is working with BNPL providers to add the plans to its database. In December 2021 Equifax announced it would add certain “pay in four” plans to its records and Experian is working on expanding its coverage of the payment plans.)

In the following sections, organized by credit type, figures reported are the latest available from TransUnion.

Credit card balances are projected to continue increasing in 2022, on top of a rise in 2021. This represents a continuing comeback from 2020, when many consumers paid down their credit card balances with savings resulting from working from home and with government stimulus payments.

Outstanding credit card balances stood at $726.2 billion at the end of the third quarter 2021, up slightly over the year earlier, but still nearly 10% lower than the level in the third quarter of 2019, pre-pandemic.

The share of accounts extended to nonprime borrowers is forecast to reach 41% in 2022, about even with 2021’s 42% and above the 38% level seen before the pandemic.

TransUnion says that lenders are attempting to build market share and to become “top of wallet” for more consumers. There is an upper limit to this strategy, apparently. The company says the surge in account originations will level off in 2022.

The company projects that in the first quarter of 2022 credit card balances will have increased by as much as 10% year over year, and will then stabilize. By the end of 2022, the firm projects, balances will have reached $805.7 billion. This would be a 3% year-over-year increase and would be the highest level since the pandemic started. However, card balances would still not come back to pre-pandemic levels.

Consumer liquidity remains relatively high, according to TransUnion, which may be reducing potential growth in card balances. However, another factor in this may be the increasing use of buy now, pay later financing.

What Card Lenders Must Watch:

Many buy now, pay later programs don’t charge interest. Even a small increase in credit card rates may boost the perception that BNPL is a bargain.

Wise points out that inflation will pose the biggest challenges to credit cards, and also to unsecured personal loans, which are often used for debt consolidation. Inflation eats into income levels, affecting consumer mindset as well as their ability to repay past charges.

Credit card delinquencies are projected to rise during 2022, though still at levels below pre-pandemic marks. Part of the increase will result from a return to larger card purchases, such as for travel and entertainment, the timing dependent on Covid trends. 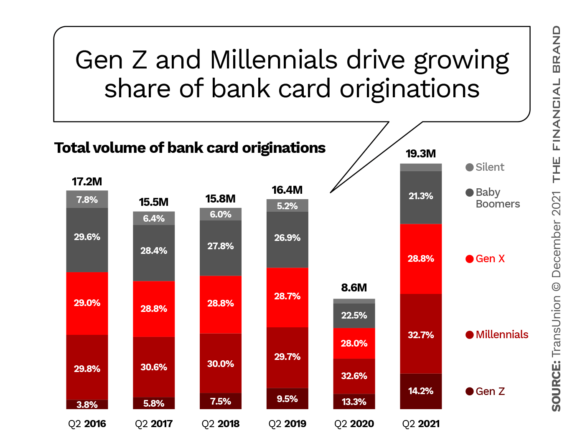 In spite of the affinity that Millennials and Gen Z have for BNPL financing, their use of credit cards continues to grow. As of the second quarter of 2021, Millennials are the largest generation among card holders now, at 32.7%, and when combined with Gen Z has become almost half of the market, according to TransUnion. Gen Z’s 14% share was a major spike over levels earlier in 2021.

The median sales price of existing single-family homes increased by 16% — $50,300 — in the third quarter of 2021 in the 183 markets measured by the National Association of Realtors. Price levels rose in virtually all of the markets and the increases were in double digits (or nearly so) in four out of five areas.

TransUnion estimates that the median home equity available per consumer reached $123,747 in the third quarter of 2021. Significantly, this is many times the average non-mortgage debt of $10,151 per consumer.

While the rate of home price increases will likely slow in 2022, TransUnion expects the level of home equity that homeowners will be able to tap to launch new projects, finance other spending or pay down other debt to increase to as much as $129,528 by the end of 2022. Total home equity available for borrowing is projected to hit nearly $21 trillion by the end of 2022. 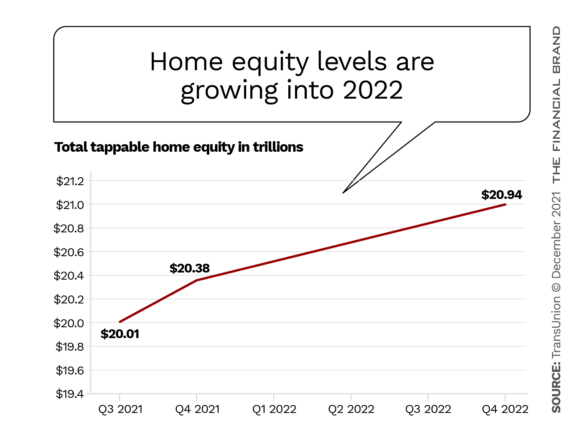 Complicating the picture is that mortgage refis aren’t quite done. TransUnion estimates that 20 million consumers could still benefit from a rate and term refinance in spite of the surge of refis in 2021. Even if rates went up by a full point, the company says about 10.5 million people could still benefit from this type of refi. In the second quarter of 2021 rate and term refis represented 27.2% of mortgages. Over the last few years cash-out refinancing, an alternate reason for refis, has been a substitute for home equity loans and home equity lines of credit, representing 19.5% of total mortgages in the same time period. (53.2% of mortgages were for purchases.)

Notably, while in other areas of credit covered by the TransUnion report lenders are reaching into riskier categories, it’s been the opposite in mortgages. TransUnion research found that the distribution of mortgage balances has been trending towards less risky consumers. Mortgage delinquencies have been low, but the company points out that they could rise a bit as mortgage forbearance programs wind down in 2022.

Inventory challenges, chiefly due to shortages of the chips that are so vital to today’s vehicles, will continue to bedevil auto lenders through 2022, TransUnion projects. As a result growth in originations will most likely remain relatively flat.

TransUnion predicts there will be 28.9 million auto loans originated in 2022, up only 2% from the expected level of 2021 sales. Testimony to the trend is that the use of dealer and manufacturer incentives has fallen to a trickle.

Rising auto prices will increase origination levels in dollars. New vehicle prices set new records through November, according to Kelley Blue Book, with average transaction prices up 13% over the year before. A seller’s market, in which high prices and limited choice stymie purchases, will continue for some time, according to Kelley. New SUVs showed the smallest increase, 4.8% year over year — but average transaction prices for these autos were north of $73,000.

Used auto prices have also been reaching record levels, according to data from J.D. Power and Manheim.

Average auto loan balances were up 6.6% as of the third quarter of 2021 over the year before, according to TransUnion.

Merchant says that lenders want to increase lending and as a result will expand into nonprime credit, especially subprime borrowers, to meet consumer demand.

Delinquencies among auto borrowers are expected to rise slightly in 2022, as lenders reach further down the credit scale. However, low delinquency rates suggest to TransUnion that the increase should be small and that delinquencies will generally be stable.

A competitive factor banks and credit unions must watch for is plethora of financial institutions and other lenders who offer auto loan refinancing. In late 2021 Lending Club announced that its growing refi program can now reach borrowers in 40 states, representing 94% of the U.S. population.

TransUnion projects that consumer spending’s comeback in 2022 will boost volume of unsecured personal loans, which had been down. As mentioned, many people rely on such loans for debt consolidation, and, increasingly, do so multiple times. In the third quarter of 2021 the number of unsecured personal loans rose to the highest level since the pandemic began (4.43 million originations), though that was still down from pre-pandemic levels.

In 2022 TransUnion anticipates that these loans will grow 14% over 2021 among consumers with prime and higher credit, and 11% among nonprime borrowers. Overall, nonprime originations will rise to 71% of unsecured personal loans in 2022, up from 68% in 2021.

The Lending Club/PYMNTS survey report cited earlier states that one out of five consumers say their finances have not recovered yet from the pandemic’s impact. “This segment of the population may be the most likely to need interventions such as short-term credit to negotiate temporary financial obstacles.”