Subscribe Now Get The Financial Brand Newsletter for FREE - Sign Up Now
The fast-growing data aggregator – previously tolerated, if not reviled, in banking circles – now increasingly works with financial institutions. It's more than an image remake. Plaid executives see cooperation as key to its future in open finance where it wants to be the means to provide consumers not only with access to financial apps but complete control of their data.

There hasn’t been much love lost between Plaid and most financial institutions for much of the fintech’s eight year existence. In fact, there’s still a lawsuit pending between PNC and Plaid, although a big class-action lawsuit brought on behalf of consumers has been settled for $58 million.

Founded in 2013 by Zach Perret, CEO, and William Hockey, the fintech used innovative technology to aggressively support fintech developers, and annoyed a lot of incumbent institutions along the way.

To banks and credit unions, Plaid was the means by which countless fintechs and neobanks, including Venmo, Coinbase, Robinhood, Chime, SoFi and literally thousands of other financial apps were able to successfully grow. Without the access to consumers’ bank account data provided by Plaid or other aggregators, these nonbank competitors couldn’t have made the inroads into banking that they have. For Plaid, this was a huge business opportunity that helped it grow to a valuation of $13.4 billion, according to Business Insider.

Plaid likely viewed traditional institutions, charitably, as “obstructionist.” Indeed, large banks including Chase threatened to prevent fintech apps from using customer passwords to access bank accounts and PNC blocked customers from sharing data with Plaid, citing security reasons. The practice of using “screen scraping” to obtain customer data — still in use, though being replaced by API arrangements — fueled some of the antagonism.

All this was “Old Plaid.”

In the space of about 18 months, there has been a significant thawing in the relationship. A “New Plaid” has emerged. As Ginger Baker, Head of Financial Access for Plaid, told The Financial Brand, “the company decided that there was a bigger opportunity out there by moving from ‘cooperation when needed’ to full-on collaboration.”

Baker, who held senior payments and financial product positions at Square and Facebook before joining Plaid, was brought on to help implement that strategy shift.

“The first few weeks I was here, I had a lot of very challenging phone calls with executives at some of the largest financial institutions.”

Evidence of the ‘New Plaid’

Plaid’s top leadership team now acknowledges financial institutions have legitimate concerns and has taken steps to address them. Further, the company is focused on building partnerships and relationships with both large banks and smaller institutions as well through agreements with providers of bank technology platforms for community and midsize banks and credit unions including Jack Henry, Mulesoft and Nymbus.

Plaid now has data access agreements “with the majority of the top ten banks in the U.S.,” according to Baker. These include JPMorgan Chase, Wells Fargo, Capital One and U.S. Bank.

In addition to the bank technology companies they work with, Plaid launched the Plaid Exchange in May 2020. An open finance platform, it is another way smaller institutions can enable data exchange with third parties without resorting to screen scraping. The exchange also has options for larger institutions, as well.

Baker states that counting all the platforms that Plaid uses, they have formal data exchange agreements with “hundreds of banks.” The Jack Henry agreement by itself potentially opens up Plaid access to “more than 350 institutions” currently using Jack Henry’s Banno digital platform.

In another indication of change, Plaid made a commitment early in 2021 to have 75% of its traffic dedicated to APIs by the end of the year, further reducing use of screen scraping. Baker told Banking Dive that Plaid’s recent API agreements with U.S. Bank and Capital One, because of their volume, “make a significant dent” in reaching that number.

The way data aggregators store customer financial data has been of concern to some financial institutions for some time. As part of the class-action settlement Plaid reached, the company “agreed to provide an explanation of its data deletion and retention policies, and to only store data that the user specifically requests or is needed,” according to a Protocol article.

Well beyond that agreement, Plaid executives maintain that data privacy and consumer control of data are top priorities. One of the company’s most interesting innovations flows from this particular emphasis.

In 2020 Plaid created a portal, or dashboard, for consumers to manage the data they share via Plaid. Known simply as Plaid Portal, the application is still in beta, but John Pitts, Head of Policy, says they’re looking to move it out of beta “in the near future.” 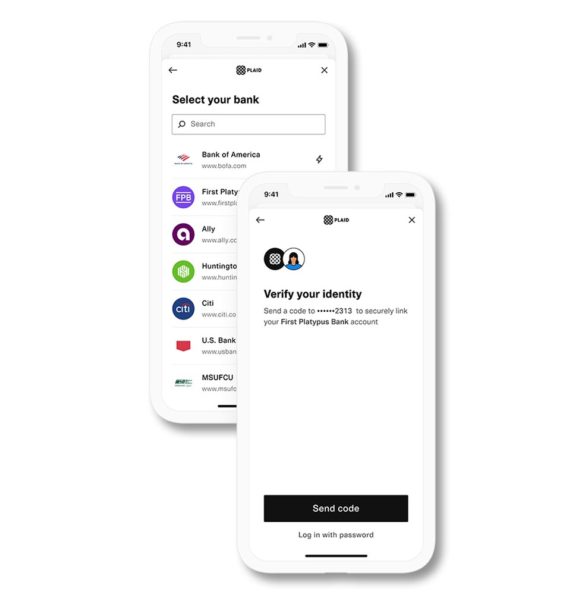 Right now consumers can log onto the portal and monitor what’s being shared with whom and disconnect an app they no longer want to share data with, according to Pitts. Alternatively they can delete the data that they have shared over the Plaid network. Several large banks including Bank of America, Wells Fargo and U.S. Bank have their own control panels that consumers can use in similar ways.

( Read More: Why Data Privacy Could Be Banks’ Next Big Competitive Battleground )

Pitts says that Plaid is working on what he calls an “interoperability phase” for the Plaid Portal in which changes in the Plaid Portal will be reflected on a bank’s dashboard and vice versa.

“The Plaid Portal and solutions like it are a clear indication of where the banking industry is going,” Pitts states. “Consumers want to be able to share their own data and control how that data is shared.” The company plans to allow smaller financial institutions to host its portal on their websites, according to Business Insider.

Plaid will begin promoting its consumer portal once it’s out of beta. That would represent a big change for the company, which so far has not marketed directly to consumers.

The Potential of Open Banking and Embedded Finance

Coinciding with Plaid’s outreach to the industry it previously regarded mainly as “data providers” is the fact that bankers’ views on open banking have changed.

“A year ago it was still a question as to whether open banking or open finance was coming to the U.S.,” Pitts observes. He has since seen a shift in opinion of many financial institution leaders on the subject as Covid pushed so many consumers to go digital. Adding momentum to that change have been the Consumer Financial Protection Bureau’s proposed rulemaking on data sharing (Section 1033) and the Biden Administration’s executive order urging the completion of that rule.

“There’s been a real evolution of the partnership mindset on the part of many financial institutions and also, frankly, on the part of Plaid, to how do we make the ecosystem work better?”

In Europe, the U.K., and several other spots around the globe, open banking laws have mandated that financial institutions must share customer data (with permission) with third parties. In the U.S. data sharing has advanced through private sector efforts including data aggregators as well as industry-supported groups such as the Financial Data Exchange, of which Plaid is a board member.

An extension of open banking even further is the concept of embedded finance in which businesses integrate payments, credit and other financial services into their business model at the consumer point of need. A Plaid survey of 1,000 business leaders found that 47% of those in the U.S. said their companies plan to launch embedded finance offerings in the future, according to a Banking Transformed podcast with Plaid COO Eric Sager.

While these open finance trends may eventually move the business model of financial institutions away from the dominance of net interest income, Baker points out that traditional institutions play a key role in most embedded financial services. It’s almost always a bank that’s backing these types of arrangements, she says.

( Read More: How Should Banking Respond to Embedded Finance Model? )

The Risk to Primary Relationships

Most financial institutions would agree that they don’t “own” consumers nor their data. Holding a consumer’s primary banking relationship is still greatly valued. Many institutions fear that the new world of data sharing will erode the number or value of such relationships.

While it’s not surprising that Baker and Pitts don’t see it that way, their counterpoint is worth considering.

“Some of our banking customers have doubted the potential business benefit of opening up their systems to better enable the permissioning of data,” says Baker. “What we find is that it actually drives a business benefit for them.” The reason? Consumers see that this institution is taking care of their needs by allowing them to use the applications that they want to use.

Pitts likens it to being “top of wallet” in a digital banking app. “The top-of-wallet account becomes the consumer’s platform for their financial life,” he states. “And that really does turn out to be the stickiest relationship with the consumer.”

Plaid also gets tons of financial data from fintechs that, with consumer permission, can be shared with banks.

A significant factor in the whole data sharing equation is that the data doesn’t only flow one way. Nearly 5,000 fintech/neobank apps use Plaid, and Baker states that “there’s a healthy amount of data” that comes into Plaid from fintechs and other providers.

“Financial institutions increasingly are becoming consumers of information from Plaid,” Baker continues. That broader set of information allows them to create new products and experiences to help people make better purchasing decisions, or to have a more holistic view of their wealth and their assets across the different institutions, including fintechs.

Naturally Plaid wants to be the one linking all the apps and data flows between banks and fintechs.

( Read More: How Open Banking’s Big Threat to Incumbents Could Become a Gain )