For all the debate about it, open banking essentially is the open exchange of financial data, a trend that will only increase. Yes, it empowers fintechs and big techs, and that challenge will loom larger. But a deep analysis of open banking by McKinsey identifies significant operational and competitive benefits for U.S. banks and credit unions that have not previously been recognized.

The term didn’t exist when Wriston strode the Earth as a banking colossus in the late ’70s to mid ’80s. But Wriston famously said, “Information about money is more important than money itself.”

Less well known is another Wristonism: “Information is a business in itself. It is also something that has made control impossible … you cannot get customers to accept prices in one place when they know there’s a better deal elsewhere. It’s a whole new world.”

Wriston wasn’t one to resist change, he was all about adapting to it. We think he’d be on board with open banking, figuring out a way to make it work to his institution’s advantage.

A pair of new reports from McKinsey suggests that embracing open banking is indeed in the interests of financial institutions as much as it is for fintechs, and for businesses and consumers.

The consulting firm actually pegs a value to the adoption of open financial data: a boost in GDP of between 1% and 1.5% in the U.S., U.K. and European Union, and far higher in some other countries, notably India.

This is not predicated on the implementation of rule-based models such as those used in the U.K. and E.U., but to the broad adoption of the digital infrastructure, and privacy and security protections that will enable the free flow of data to occur.

McKinsey’s detailed analysis, along with recent developments, suggests strongly that financial institutions, if they have not yet taken steps to prepare for a world of open data, should begin crashing on it.

In the U.S., President Biden made a specific reference to moving forward with financial data sharing in his far-reaching executive order of July 9, 2021. That is expected to add momentum to various private-sector efforts to create an orderly approach to open data. The Financial Data Exchange’s API-based approach, for example, has been embraced by banking and nonbanking companies that until recently had been at odds over security issues inherent in the practice of screen-scraping of data.

“We don’t think it’s been so much a case of resistance to open financial data in the United States,” observes Olivia White, a McKinsey Senior Partner and one of the principle authors of the Unbound report, “but rather that the openness banks see driven without regulation has created less of an organized push than in other countries.”

As the report notes, the U.S. already shares a wide range of data, but lacks standardization. Private-sector data aggregators like Plaid “broker data flows between providers and users, with limited consumer control,” McKinsey states. CFPB’s rulemaking could introduce a more standardized framework, although it’s unclear at this point what direction the agency will take.

While it’s not clear yet exactly how open financial data will evolve in the U.S., the trend toward greater sharing of data between financial institutions, fintechs, big techs and other third-party providers is only going to increase. This will have profound implications for the near-term future of the traditional banking industry, according to McKinsey.

In its report entitled, “Financial Services Unchained,” McKinsey states: “We believe that if open finance continues to accelerate it could reshape the global financial services ecosystem, change the very idea of banking, and increase pressure on incumbent banks.”

The report further predicts that the ” ability for customers to better understand their full financial picture — one of open banking’s promises — could result in margin compression, as pricing and charges become more transparent. Banks may also have to contend with margin sharing, as payouts to digital platforms could play a far greater role in customer acquisition.”

The chart below, based on the situation in the U.K. and Europe, gives a visual representation of how things will change. 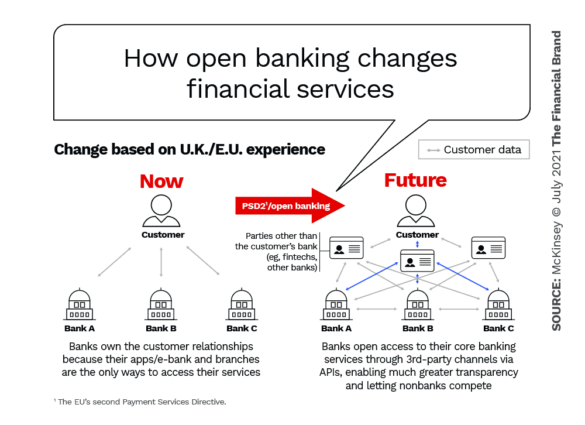 “We think the open data ecosystem is evolving in interesting ways that aren’t as simple as banks win or lose and fintechs win or lose.”

“We increasingly see big tech players entering financial services, and using open financial data as a tool in that product expansion,” White states. However, she adds, “data is like sunshine, not like oil.” Meaning multiple players can use the same data. As a result, big tech companies will have bank partners, but will continue to face many bank competitors, she states.

The outcome of this increased competition in banking is not likely to be winner take all, however, and McKinsey expects incumbent institutions to continue to play a meaningful part. Still, the consulting firm firmly states it will be imperative for them “to understand and respond to these changes, reimagine offerings, adjust business models, and forge successful partnerships with fintechs or tech companies, to ensure continued success and relevance.”

There is Significant Upside Value in Open Data

While it may seem from the above that traditional financial institutions face a tough future, the McKinsey report entitled “Financial Data Unbound,” outlines seven primary benefits of open financial data. Four of them specifically relate to financial institutions, the other three more to consumers and small to midsize businesses.

For the most part, financial data sharing is still limited in many areas of financial services, resulting in friction, cost and reduced access, the firm states.

Consumer willingness to share financial data doubles when they find an appealing product or service enabled by it or understand the value it might bring them, a McKinsey survey found.

In the two charts below, McKinsey plots the benefits of open financial data sharing. The first chart looks at the three main benefits to consumers and small businesses, indicating ten specific use cases. 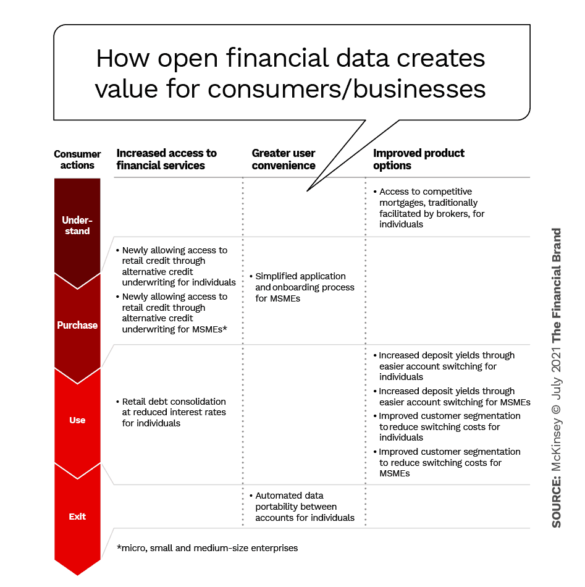 Below are excerpts of the three main benefits to consumers and small firms from open finance, as described in the McKinsey report:

1. Increased access to financial services. Data sharing enables customers to buy and use financial services to which they might not otherwise have access. For example, open financial data can help assess the creditworthiness of borrowers by sourcing rent, phone, utility and other bills.

2. Greater user convenience. Data sharing saves time for customers in their interactions with financial services providers, most importantly during product purchase and exit. For example, open access to data on available mortgage products, with applications automatically prefilled, allows consumers to apply for loans without needing to use mortgage brokers.

3. Improved product options. Open financial data can broaden and improve the range of product options available to customers, saving them money. For example, an open-data ecosystem makes it easier to switch accounts from one institution to another, helping retail and small business customers obtain the best yield.

Clearly fintechs, neobanks and other “third-party providers” have already benefitted from access to individual consumers’ banking data previously locked up in banks and credit unions, even if only available by the practice of screen scraping. Less obvious are the benefits to incumbent institutions from open banking.

McKinsey did not specifically address the relative share of benefits to bank and nonbank institutions in it analysis. However, White says that “We think the open data ecosystem is evolving in interesting ways that aren’t as simple as banks win or lose and fintechs win or lose. Some banks will leverage open banking to take market share from others. Some will lean on Banking-as-a-Service (BaaS) enabling fintech players.”

Banks and credit unions have regarded open banking as either a compliance burden or a threat. Both are correct! Increasingly institutions realize open banking can produce operational gains and new business models. 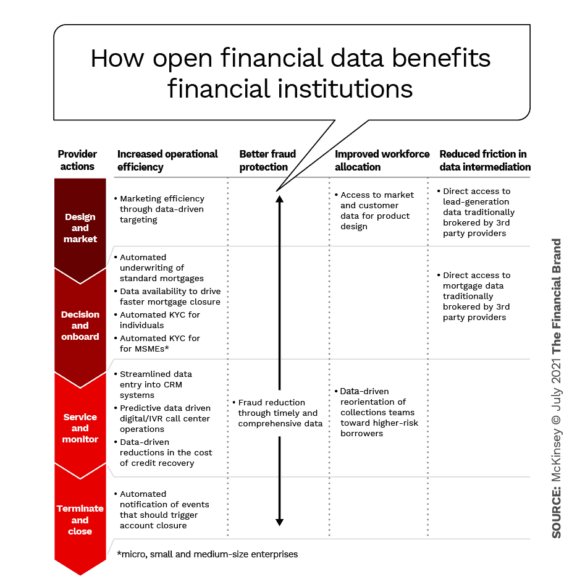 Below are excerpts of the four main benefits to financial institutions from open banking, as described in the McKinsey report:

1. Increased operational efficiency. Since most data is still found in physical documents or disparate digitized sources, open financial data could cut costs by providing verified data digitally and making it easier to adopt automated technologies, with the associated efficiency boost. All of this can also improve customer experience by promoting faster and more transparent interactions.

For example, customer profiles built on open data provided by other institutions can increase use of predictive analytics and artificial intelligence in digital and interactive voice response–based call center operations. On the customer acquisition side, an open-data ecosystem can help financial institutions engage in more targeted, data-driven marketing.

2. Better fraud prediction. This can lead to a significant reduction in costs for financial institutions, as well as improved customer experience by gaining real-time access to a full set of customer data. Sharing fraud-specific information and other kinds of data provides more evidence and clues with which to flag suspicious activity.

3. Improved workforce allocation. Financial institutions can use open data to better allocate and target their workforce, assigning staff to the highest-value activities.

Drawing on external data sources to help collections staff better focus on high-risk customers, is one example. Similarly, pulling reliable data on customers, including that housed in external sources, such as social data, increases the productivity of product researchers and designers by reducing the time they spend in sourcing data from vendors.

In the U.S., for example, where nearly half of all mortgage providers rely on third-party data for mortgage origination, such data can cost as much as $80 per mortgage application.