At 10:45 am on April 7, dozens of dancers converged on Times Square in New York City to film a “flash mob” performance for Wells Fargo.

It starts simply enough. A guy drops three 5-gallon buckets down at the intersection of Broadway and 7th Ave in Times Square (known as “Military Island”). The lone man whips out drumsticks and starts banging out a rhythmic beat. More drummers appear as if out of nowhere, toting large garbage buckets that will provide the production’s bass notes.

As the percussive intro comes to a close, dancers sporting blue and green hoodies stream in, along with more onlookers. The dance crew performs their first routine to “One Singular Sensation” in true NYC style. (The flash mob’s members sang the background choral track the day before in a recording studio in the East Village.) When the beat turns tribal, old school break dancers bust their moves. After a few solo performances, the troupe reprises the Chorus Line number for their finale. 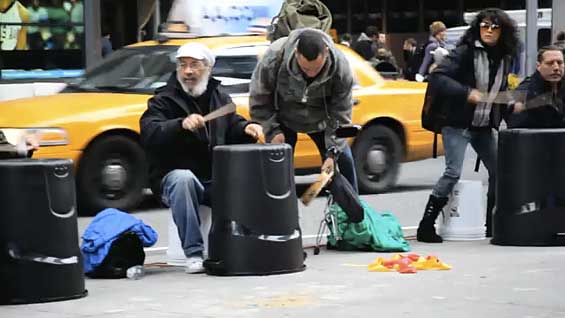 The performance starts when an army of drummers sets up in Times Square. 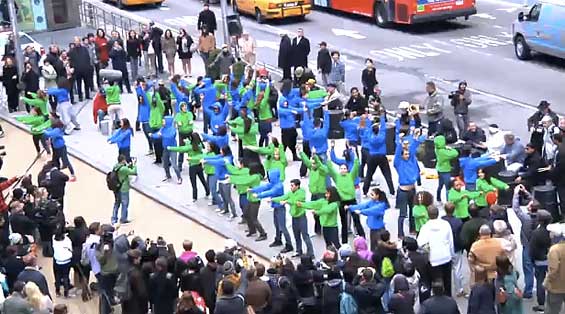 Dancers clad in Wachovia colors converge on the location. 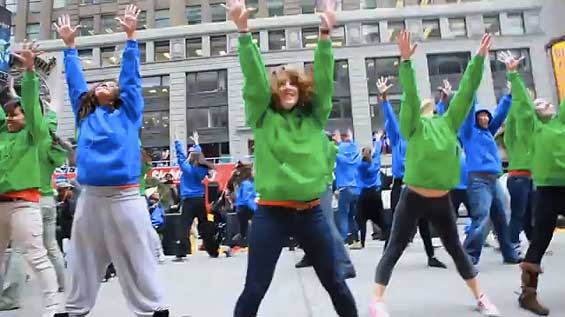 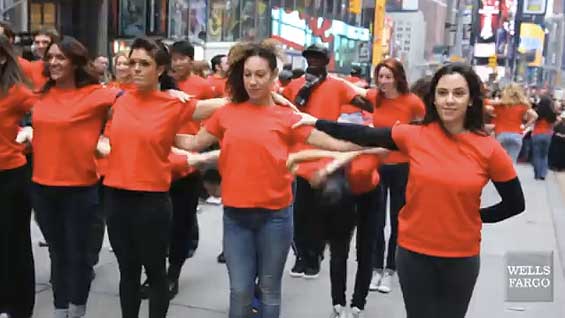 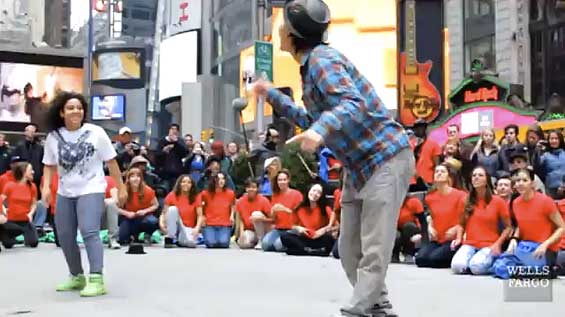 A sequence of featured performers steal the stage with their hip-hop and break dancing moves. 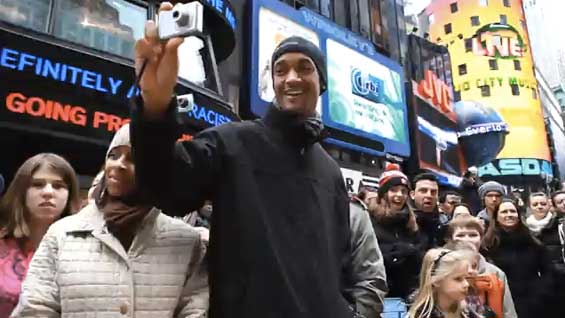 The crowd loves it. 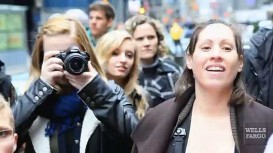 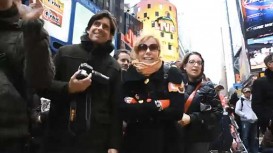 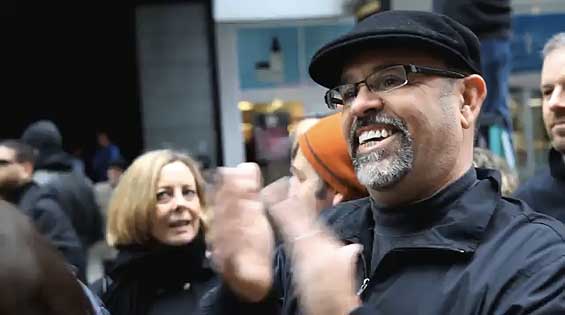 The production is very light on branding. A subtle Wells Fargo watermark sneaks into the video’s lower right corner around the 3-minute mark. The dance team sheds their blue and green garb to reveal plain t-shirts in Wells Fargo’s signature red color — an allusion to the bank’s Wachovia takeover — but that was likely lost on most viewers. The rest of the costumes are uncoordinated, and none bear the bank’s name or logo.

“Following the practice of typical flash mobs, we didn’t want to over-brand it,” Ed Terpening, VP Social Media at Wells Fargo, told The Financial Brand. “Although the event itself was probably a bit too under-branded.”

“Really, the point was to capture the event for wider impact through YouTube,” he clarified. “We were not counting on PR coverage so much as driving brand engagement impact on YouTube after the event with the fully produced video.”

The video didn’t go viral spontaneously, at least not at first. Wells Fargo took a small shortcut on its way to 1 million views by paying to have its flash mob video featured on YouTube. Sponsored videos appear on YouTube’s homepage and above search results.

A flash mob of this magnitude clearly presented some logistical challenges. Wrangling no fewer than 20 percussionists, 6 lead performers along with 50 other dancers into one of the world’s most busy and public places is no easy task. For the performance, a sound system had to be trucked in, plus 4-5 cameras were needed to capture the action. There’s a handheld camera on the street, one elevated on the sidewalk, one wide shot from a fifth-story window nearby, and at least one camera filming crowd reactions and other b-roll.

Wells Fargo said that the bank worked with NYC officials and obtained the necessary permits for its Times Square location.

Throw in two weeks of rehearsals, a production company, costumes, editing, PR, etc., and the amount of time and money required to pull this off really starts to pile up. The gal clad in gold near the end is none other than Shoshana Bean, a Broadway star. It would be surprising if Wells Fargo was able to produce the complete, finished video for less than $250,000.

Reactions range from ‘fantastic’ to ‘fake’

The 300+ comments left on Wells Fargo’s video by the YouTube community span a range of reactions.

One commenter noted that Wells Fargo was “using online media to build brand awareness as most businesses are doing,” something that didn’t seem to bother the majority of viewers. They applauded the advertising effort as both creative and engaging.

“I think this was the most epic commercial I’ve ever seen,” said one commenter.

Someone else admitted that it was the “longest YouTube commercial I ever watched — 6 minutes 46 seconds.”

One faction of dissenters objected to the commercial nature of a corporate-sponsored flash mob.

“Thought it was cool. Until I clicked it. And saw it was Wells Fargo. All cool points went out the window.”

“It was awesome except for the Wells Fargo part.”

In the bank’s defense, one commenter pointed out that “at least Wells Fargo cannot be deemed ‘stuffy.’”

Another commenter had a more philosophical perspective: “Is art more enjoyable when it seeks only to elevate the human spirit, and not the value of a brand?”

Quite a few commenters took issue with the notion that Wells Fargo’s production deserved to be labeled a true “flash mob,” instead calling it a publicity stunt.

“How is this a flash mob if everybody is paid by Wells Fargo to do a planned performance in Times Square?” asked one person. “People don’t do flash mobs for billion dollar corporations.”

“I don’t think Wells Fargo gets flash mobs,” added another. “They really don’t mean anything when you have a multibillion dollar bank putting them together.”

“Flash mobs are about free spirits coming together to bring joy to strangers,” a fellow detractor chimed in. “This does not do that. This is soulless.”

A number of people griped that flash mobs have officially jumped the shark.

Those irritated by all the criticism said phooey to that.

“Stop complaining and enjoy the show.”