Subscribe Now Get The Financial Brand's FREE Email Newsletter
JPMorgan Chase leads U.S. banks in this quarterly social media ranking, based on its number of followers and its activity across Twitter, Facebook, YouTube and Instagram. Some of the other banks on the list may surprise you — including one that has just $1 billion of assets.

The banking unit of JPMorgan Chase is tops in social media among U.S. banks.

Chase earned the No. 1 spot in The Financial Brand’s social media ranking for the third quarter of 2022 — and it is posting some impressive growth.

Chase’s stature in the social media pecking order is based on the latest results from The Financial Brand’s Power 100 database. The quarterly rankings show which institutions are outperforming on each platform and across social media overall, based on their level of activity and the number of followers they have.

Of the top 100 social media standouts among banks globally, 20 are from the United States, the most of any country.

A previous post examined trends across all 100 banks. But the analysis here is based solely on the group of U.S. banks that earned a spot on the global list, with the chart below showing how they rank compared with their peers in this country.

While the biggest banks in the country are in the ranking, so is at least one bank with just $1 billion of assets — Credit One Bank in Las Vegas, Nevada. It landed in the ranking largely because of its 20 million YouTube views, which is nearly double the number of views that Bank of America’s videos have.

See the global social media standouts for the third quarter:

More detail, including the full methodology, can be found on the FAQ page for the Power 100 rankings.

Though there are a few exceptions, the top 20 U.S. banks in social media are continuing to pick up Twitter followers at a steady pace — they’re not peaking yet as seems to be the case with Facebook (more on that below).

The banks as a group added a median of 400 new Twitter followers in third quarter of 2022, which is roughly in line with the quarterly median across the past three years of 439 Twitter followers.

Bank of America has grown the most on Twitter among the U.S. banks ranked. This is true, even though it appears to be either tweeting less than other banks and/or is deleting tweets. (Twitter provides only the overall number of existing tweets, so deleted tweets are not readily apparent.)

Over the past three years, the banking behemoth has gained an average of 37,600 followers every quarter. On a per-tweet basis, that gain works out to a whopping 187 followers added for each tweet — the highest ratio among the 20 banks that earned a spot in the ranking. 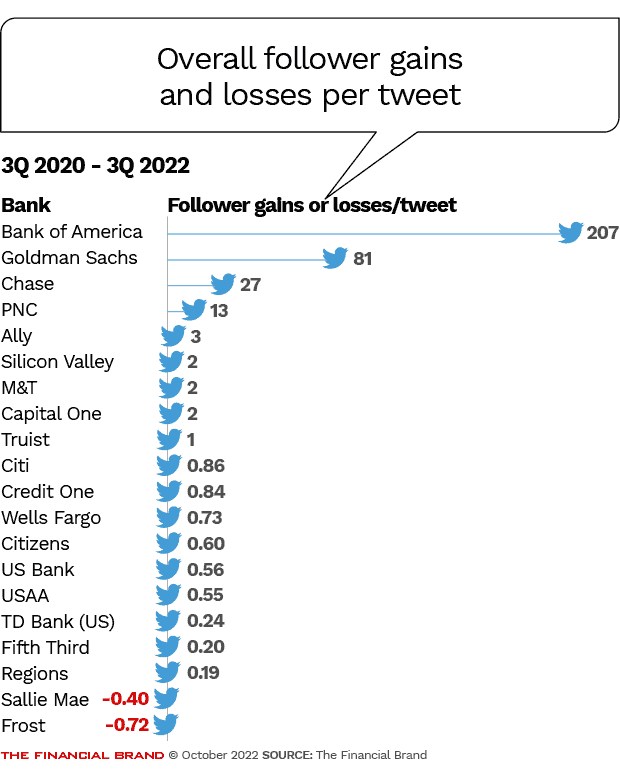 Overall BofA boasts the third-highest number of followers among U.S. banks on Twitter, behind Goldman Sachs (959,100) and Citi (915,800). But BofA is gaining followers much more quickly than those two are.

Growth might seem slow for banks on Instagram, given most aren’t picking up more than a few thousand followers every quarter. But even so, each of the 20 banks is expanding their Instagram base by at least 30% on a quarterly basis.

Of the four social media platforms evaluated in this ranking, Instagram is the one with the shortest track record. At the same time, it is also the venue with the most growth potential.

It had not become a focus for banks until recent years, so most are still ramping up and growing from a small base.

There are a handful of banking “IGers” that have grown their number of followers by more than 100% in the three years ending Sept. 31, 2022 — TD, Ally, Citizens and PNC.

Whether that has to do with infrequent posting on Facebook is unclear. With Twitter and Instagram, it’s easier to see in the metrics how active banks are on these social media platforms. With Facebook, data on the number of posts is not available.

That aside, banks have established a solid foundation for themselves on Facebook over the years. Generally speaking, the number of Facebook followers they have is dramatically larger than the number of followers on other platforms.

There are a few banks still growing at a decent clip: Wells Fargo, Goldman Sachs and Silicon Valley Bank all saw a third-quarter gain in followers of more than 4%.

Goldman’s gain comes despite putting up few new posts. When the Wall Street giant does post, it often targets employees, rather than trying to build a relationship with consumers.

SVB uses its infrequent Facebook messaging to showcase social advocacy work. One post was about its Black, LatinX and women Fellows Program and another was for International Women’s Day to showcase its chief marketing and strategy officer, Michelle Draper.

YouTube Is a Big Social Media Driver for Some Banks

In contrast with Facebook, YouTube performance metrics abound. There are ways to track subscribers, likes and shares, for example. But the best way to assess YouTube success is views.

And, by that measure, some of the top 20 U.S. banks on social media are having a lot of success. In fact, they would not even be in the ranking at all if it wasn’t for their YouTube videos.

Citizens posts on YouTube quite frequently. Not every video is a winner — they often only nab a few hundred views, which may be why the bank has just 2,500 subscribers. However, every once in awhile, Citizens gets a hit video; for example, its June 17 “Love Thyself” video, a plug for student loan refinancing, picked up nearly 90,000 views.

SVB’s most recent videos have yet to strike a chord with viewers. But its content is evergreen enough that the videos continue to garner love on YouTube years after getting posted. Its “Welcome to Silicon Valley Bank” intro video — posted in September 2016 and displayed on the main page of the bank’s account — has over 100,000 views.