Subscribe Now Get The Financial Brand's FREE Email Newsletter
According to The Financial Brand’s “2013 State of Retail Bank Marketing” study, 18.3% of all banks and credit unions are on Google+ today. And 1 in every 13 have plans to hop on the social network this year. Should they bother? No way.

The Financial Brand looked at 100 retail financial institutions on Google+. Nearly half have abandoned their once-active accounts — 30% of banks and 64% of credit unions. In fact, you really have to search hard to find a credit union that is still active on Google+ today.

Among the 35 active banks still on Google+, they have accrued a total of 36,677 “+1s” (Google’s equivalent of Facebook’s ‘Like‘). Just under half of those belong to one bank — BofA. The 28 active credit unions have collectively generated a paltry 6,225 +1s, again with half coming from just one institution: Navy Federal. 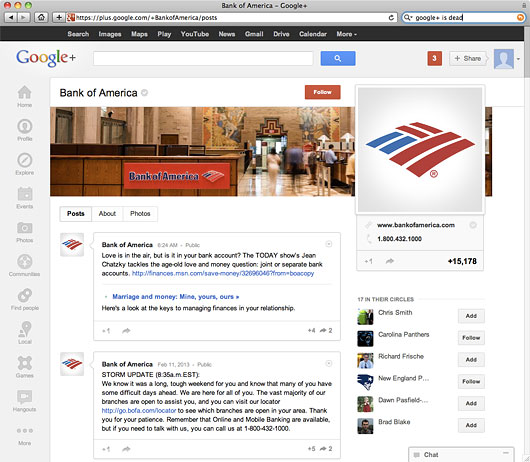 Of 50 banks studied, only 35 were still active, and only one of those had anything you could describe as “traction”: Bank of America. In the study, BofA represented 41.4% of the total +1s and 37.6% of the total number of followers. Each post they put on Google+ gets maybe two or three +1s, with some getting a dozen or so.

Google+ is by far the lamest major social network around today. Even MySpace is better. The Google+ user experience is poor. The interface is bulky and complex. Ultimately Google+ is a social media redundancy offering no real advantage over Facebook, Twitter or YouTube. And if Google’s own management team doesn’t use Google+, should it come as any surprise that the company’s social media experiment is failing.

Who is it for? What does it do (differently)? What marketplace need does it fulfill?

The Financial Brand has frequently asserted that social media (at least for many) financial institutions can be a huge waste of time, particularly for those who refuse to contend with the harsh realities they face. While there may be specific and limited applications for some financial institutions on some major social channels like Facebook, Twitter and YouTube, Google+ is without question a complete bust. Even if you think Google+ takes “only a couple minutes,” that time would most certainly be better spent chatting with coworkers at the water cooler. Seriously.

Pick One or Two Social Channels and Dump the Others

That sounds great. It makes the company sound so hip and committed to new media channels. But then you load up those social media pages and what do you find? Nothing but neglected, empty, abandoned accounts — lots and lots of crickets.

Do banks and credit unions really need to be on all these social networks? No. Hell no! Most only have the time and resources to put into one social media channel at the most (and even then, possibly not very well). Despite what many social media experts recommend, every bank and every credit union does not need to have a presence on every social platform.

Reality Check: The best a bank or credit union can hope for is to excel in only one social media channel, with perhaps mediocre success in a second. In the financial industry, you won’t find more than a handful of exceptions to this rule — anywhere around the world — and those exceptions will all be huge household brands (the top 200 global banks).

Financial institutions seem to be looking for the easiest solutions to tackle social media — “What’s the minimum we have to do in order to put that cool little social media icon up on our homepage?” So here you go… a social media “strategy” in one paragraph:

Big banks and a handful of big credit unions should consider using Twitter to solve customer problems and answer their questions. Facebook is great for giving away money to charities, and other similar community-oriented initiatives. YouTube is a good place to stuff your TV commercials and financial education videos. Forget Google+ and Pinterest completely. Foursquare has lost its novelty, so you can pass on that too. If you haven’t started a blog yet, don’t bother because no one is going to read it. And what about LinkedIn? Well, if you think having a company page there helps you in any way, go ahead and take an hour to set one up.

If that’s still too complex, you could really boil it down to this: If you only have time for one social media channel (as will be the case for 9 out of 10 financial institutions), just stick with Facebook and forget the rest.

Due Diligence: Do Your Homework!

Before your financial institution jumps onto any social network, you need to spend a minimum of 10 hours studying what other banks and credit unions are doing there. Assess what impact (if any) their efforts are having, and be honest about it. Ten hours on the front end could spare you hundreds of fruitless hours on the back end.

You need to study peers in your asset class. If you’re a community bank with $200 million in assets, it doesn’t do you any good to look at what a $2 trillion bank has put together. If you can find five successful case studies for any particular social channel from similar financial institutions with comparable assets, you may have an easier time making the case to your CEO.

You should be asking the same questions about potential social channels as you would any other opportunity: How does your financial institution benefit? What are you really going to get out of it? How do those things complement your organization’s strategic plan? How do they support your company’s business objectives? How many fans and followers are you really going to see? How engaged will they actually be? And who is going to spend how much time managing it? In other words, what do you get, and what do you have to give to get it?