Subscribe Now Get The Financial Brand's FREE Email Newsletter
Getting a big-name influencer is a financial marketer's dream. But it's out of reach for most banks and credit unions. College athletes are now an affordable option for community financial institutions who can't tap the bigger influencer market. Here's how one credit union is making it work.

Getting a popular social media influencer to endorse a financial institution is a high bar. They’re expensive and in-demand.

But these social media stars are tough for local community banks and credit unions to nab for marketing campaigns.

There is one solution, however, that puts influencers within reach for most financial marketers: college athletes. Addition Financial — a credit union based in Lake Mary, Fla. — is working this angle aggressively, sponsoring athletic influencers at the University of Central Florida (UCF).

“Influencer marketing has really exploded in the last few years, just because people want to buy from people that they trust,” says Valerie Moses, the Senior Relationship Manager of Community Engagement and Partnerships at Addition. “Student athletes are people that the students on campus and in our community really trust and value the opinions of.”

What does an athlete-financial institution partnership entail? And how does a bank or credit union break into the business?

That changed in July 2021, when the NCAA determined Division I athletes could use their stature to make money. It follows state law changes for now.

“With the variety of state laws adopted across the country, we will continue to work with Congress to develop a solution that will provide clarity on a national level,” said NCAA President Mark Emmert in a statement.

Listen In: The Power of Social Media Influencers in Banking

28 states have passed individual NIL laws that ensure the NCAA can no longer prevent athletes from earning compensation based on their name, image and likeness, according to Philadelphia law firm Saul Ewing Arnstein & Lehr. The individual state laws are primarily modeled after California’s ‘Fair Pay to Play Act’, the firm says, which was the first state to pass NIL legislation.

Curious what your state’s rules are for college athletes? Check out the NIL Legislation Tracker

The athlete endorsement program wasn’t Addition Financial’s first foray into academic sponsorships. The credit union — with assets of $2.61 billion — first teamed up with University of Central Florida back in 2013. It is also partnered with Seminole State College and Valencia College.

“We were actually founded by teachers, so the education community is really where we’re focused right now,” Moses tells The Financial Brand.

What Addition Financial Looks for in Student Athletes

Addition Financial has two student athlete sponsorships under its belt: one it launched in the fall semester of 2021 with UCF quarterback Dillon Gabriel and another with track and field athlete Rayniah Jones in the spring semester of 2022.

“They changed the [rules] over the summer and now we’re able to partner on a sponsorship level, so a lot of student athletes have been taking endorsement deals,” Moses said.

Gabriel, who now plays for the Oklahoma Sooners, had a clothing brand called “Dedicated to Greatness” when Addition was looking for sponsorship candidates.

“He had apparel he was selling,” Moses explains. “Not only were we working with him as a student athlete and as someone who is on campus learning to navigate their finances, but as a student who is running his own business.”

Addition Financial was drawn to Dillon Gabriel not just because he was a star quarterback, but because he had a small business too.

Owning his own business line made him ideal for Addition’s financial education campaigns. “He needs to be able to responsibly manage his finances and by aligning with him we can kind of show ‘Hey, this is how we as a credit union, are helping students develop positive money management habits’,” Moses said. 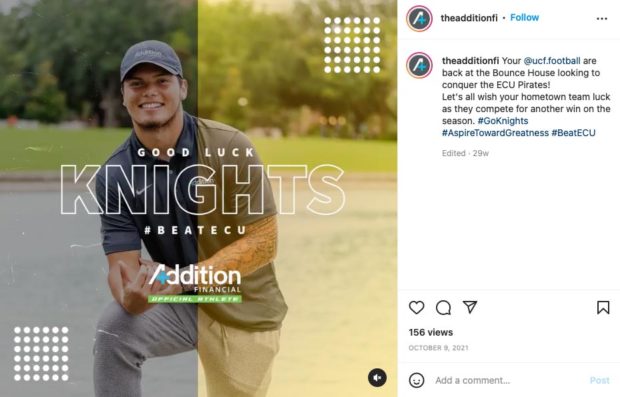 Kicking off the individual sponsorships process with Gabriel was ideal, she continues. The first round ended with the fall 2021 football season. The latest partnership with Rayniah Jones takes the sponsorship to the next level. Jones, a track and field star, earned herself a spot at the 2021 U.S. Olympic team trials with her sprinting times. To top off her 2021 season, she won the American Athletic Conference 100-meter hurdles title.

“Jones was well regarded by everybody who knew her, and we really wanted someone that would be a positive representation of the brand and has a great personality,” Moses said of the junior hurdler. “She was also highly recommended by the UCF athletics staff.”

Part of the partnership strategy, too, is ensuring the athletes are consistent with the branding behind Addition Financial.

“Our goal is to help not just the student athletes, but the student body as a whole, to develop positive money management habits so that they can take those with them into the future and make stronger financial decisions,” Moses says.

What’s In It for the Financial Institution?

As mentioned, Addition was already building relationships with University of Central Florida prior to embarking on athlete endorsements. Its involvement with UCF started with debit cards and financial education workshops. Now, every time a student swipes their debit cards with UCF, the credit union donates back to UCF athletics.

Student members (as all Addition members do) also get access to discounted tickets to events not just at UCF Athletic games or the Addition Financial Arena, but also to Tampa Bay Buccaneers football games and Orlando Solar Bears hockey games.

But the benefits don’t all fall to the students. Although Moses doesn’t know the retention rate of students staying with Addition after they graduate, there are big wins for the credit union in working with student athletes.

“We’re looking at their social media and seeing how they represent themselves,” Moses says. “We’re doing a lot of social media engagement through this partnership. We have looked at follower counts, but I think engagement numbers are much more important.”

For instance, Jones’ Instagram has picked up nearly 10,000 followers, and an average of a third of those engage with the track sprinter’s posts, Moses explains. This, in turn, has drawn more attention to Addition Financial. Jones also helps promote the credit union’s financial education campaigns on TikTok. 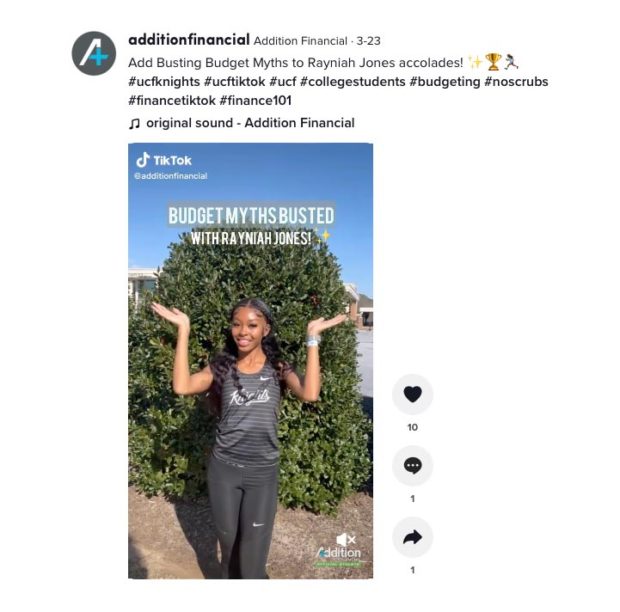 For now, Addition plans to stick with college athlete sponsorships, meaning the partnership won’t carry over into the athletes’ professional careers.

“We want to make sure that we’re aligning our brand with athletes that align with us well and that are positive influences in the community,” Moses says.