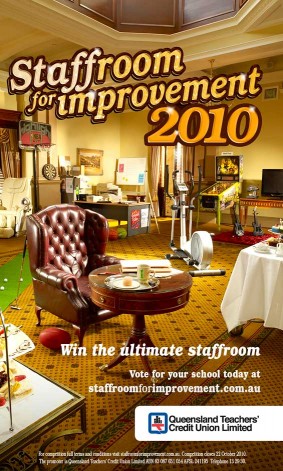 The battle among Aussie teachers to win a $30,000 staffroom makeover from Queensland Teachers Credit Union is over, and a winner has been crowned in the “2010 Staffroom for Improvement” champion, following two weeks of intense voting.

Immaculate Primary School in Annerley, with just 127 students and 26 staff, claimed victory. It took the support of the school’s entire surrounding community to catapult the tiny primary to first place.

“Teachers, parents and students alike worked tirelessly from the beginning to get out there and gather up support, and we never gave up,” said school principal Helen Camden.

In all 60,000 votes were cast. During the competition, the credit union saw 32,000 subscribers opt-in to receive email updates, and finished with over 2,600 Facebook fans. 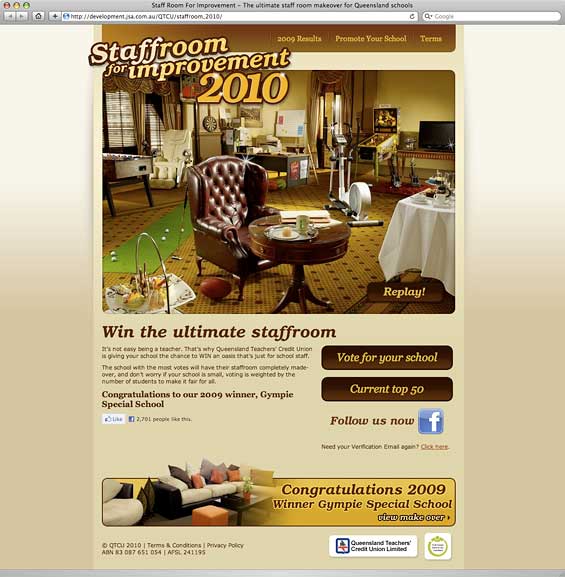 Strategy to reignite love from the core base

Chris Moses, a spokesman with Queensland Teachers’ Credit Union, said they
were looking to rekindle the credit union’s relationship with its historical base — teachers — who may have felt a slight sting when the credit union expanded beyond its roots in education. A while back, QTCU opened its doors to the public, as member loan demand outstripped deposit growth.

“The rationale for doing this started as a way to say ‘thank you’ to the teachers, and rekindle some association — affection even — for our brand,” Moses said. “The campaign is about giving something back to our original core audience: teachers.”

“The environment here in Queensland was different a year ago,” Moses said. “Teachers were in the middle of enterprise bargaining/pay disputes etc, hence this concept was born out to tap into that sentiment and indulge the teachers.”

“On the registration form, we ask for the voter’s occupation because we have different product banners and emails that are presented to those who aren’t teachers,” Moses said. “We also ask a few product related questions in exchange for bonus votes, and then present a targeted banner at the end.” 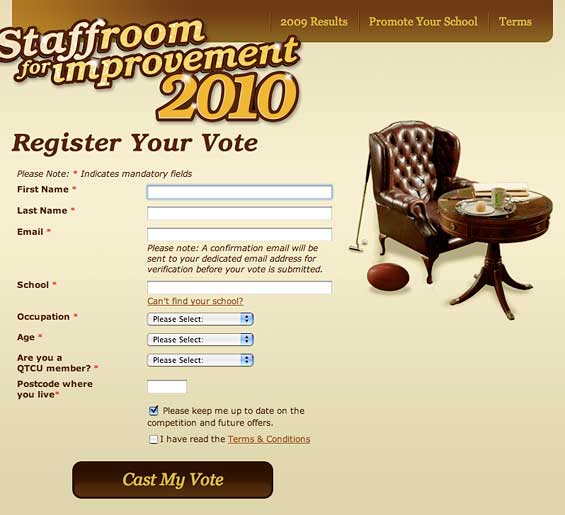 Last year, the credit union debuted the “Staffroom for Improvement” campaign on World Teachers’ Day. The inaugural 2009 edition started off with an email to the principals of some 1,700 schools. During the 18-day promotion, they updated the online list of top-50 vote-getters three times, around Day 5, Day 12 and Day 15, followed by an email to the ever-growing list of opt-in subscribers.

2009 STAFFROOM FOR IMPROVEMENT
This YouTube video explains how it worked last year.

Contests like QTCU’s requiring contestants to campaign publicly results in all kinds of grassroots marketing and positive PR, including some 28 newspaper articles.

Perhaps the most valuable aspect of the inaugural promotion was the database of 17,000 opt-in subscribers that the credit union was able to build, and in a relatively short period of time. “For the majority of these 17,000 subscribers, we learned their age, occupation and product holdings,” Moses said. This database became the backbone for the 2010 promotion.

“This year we ran the promotion a month earlier so that the winner would be announced on World Teachers Day,” Moses said. “We backed it up this year with a print ad in some teachers’ publications, plus we sent a couple of posters to each school.”

Ways to improve ‘Room for Improvement’

Expand Prize Pool. Currently, there is only one prize — first place for staff room makeover. But after fighting a tough battle with fierce competition and lots of lead changes, the schools that finish in second- and third place might feel a little sour about coming up empty. “Second- and Third place prizes are a great idea, as it doesn’t cost much in the wider scheme of things,” Moses said.

Product Tie-in. Social media purists suggest that the medium must be kept “pure and free of marketing.” Hogwash. QTCU is receptive to the idea of integrating a product, especially since the credit union has financial products specific to teachers. “I’ll get on to it straight away as we have an excellent Teachers product package,” Moses promised.

Queensland Teachers Credit Union has $1.2 billion in assets and 83,000 members, so they have the time, resources and audience size for social media initiatives that other smaller financial institutions don’t. Also, keep in mind that voting is one of the lowest levels of social media engagement, plus it’s not terribly difficult to stimulate people’s interest when you give away $30,000.

Banks and credit unions choosing to pursue a social media initiative should always look for opportunities to:
(1) have a strategy that clearly aligns with a differentiated brand;
(2) speak to a very specific audience segment (and no, “people who may need banking services and like winning free stuff” does not count);
(3) capture email addresses, physical addresses, age, occupation and other valuable MCIF information; and
(4) integrate products and services with relevance to your audience, your brand and your strategy.

From ING DIRECT targeting savers and USAA targeting military men and women to QTCU targeting teachers, financial institutions will a much better sense of what they should be saying and to whom — whether you’re talking about a social media strategy or a broader brand strategy — when they commit to a specific, narrowly-defined target audience. When they try to target a wider audience, they water down their brand… and increase their chances of wandering around aimlessly on sites like Facebook and Twitter.